Filming Greece | Thessaloniki 1917: The fire that gave birth to a city 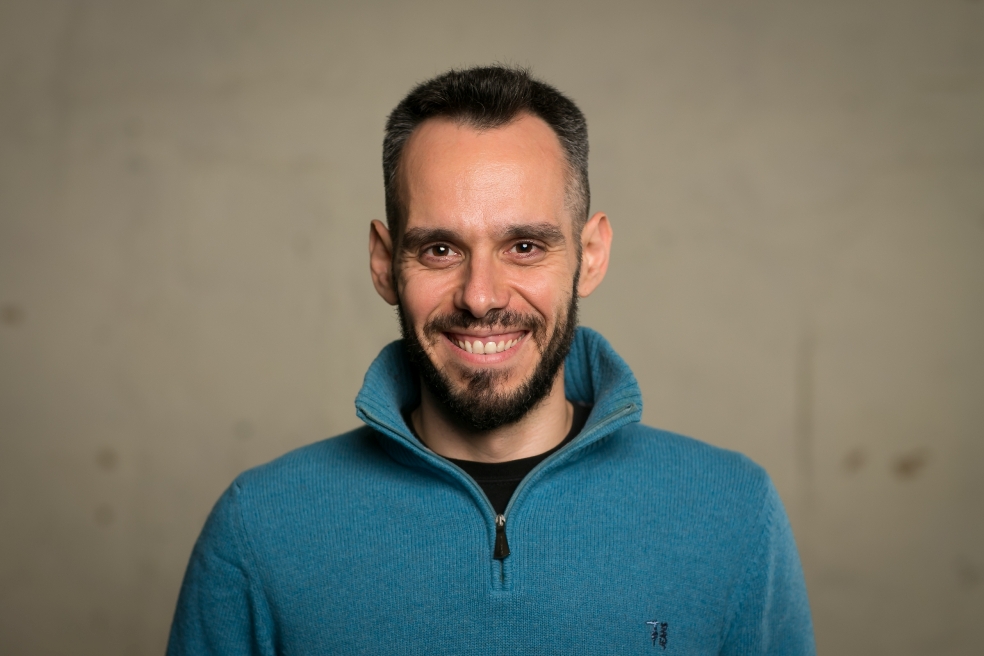 “Is it possible for a disaster to be an opportunity for a new beginning?” Gregory Vardarinos, the director of “The Great Fire of Salonica: Birth of a city” documentary states that this is the case for Thessaloniki, a city that survived the greatest and most devastating fire in its history in 1917 and was reborn from its ashes. In 32 hours, the fire destroyed two-thirds of the city center, burnt down more than eight thousand buildings, left approximately 74,000 people homeless (mostly Jews), and accounted for 8 million GBP in damages. A hundred years later, through rare original material, contemporary testimonies and interviews with historians and researchers who have exposed unknown aspects of the modern city, Gregory Vardarinos maps a society, an era, and a city, in a cinematic narrative. He sheds light on the inhabitants' moments, but he also uncovers the circumstances, the background as well as the long-term effects of a huge residential, cultural and social change.

Director, producer, writer and cinematographer Gregory Vardarinos graduated with honors from the University of New York (Film and TV studies). He also holds a master's degree in Cinema Direction from the School of Fine Arts of the University of Edinburgh, which he attended as a scholar of the Onassis Foundation. The documentary “The Great Fire of Salonica: Birth of a city” was screened for the first time in September 2017, during the 82nd Thessaloniki International Fair and it was warmly received by the audience. It was granted the audience award in the 4th International Documentary Festival of Peloponnese as well as a special honor in the 11th Documentary Festival of Chalkida. 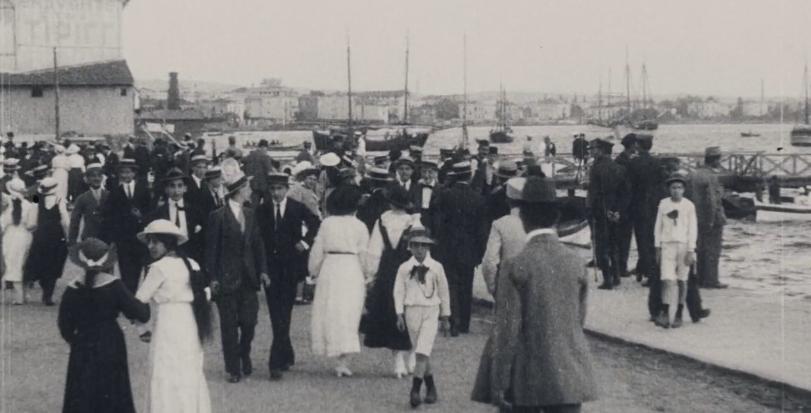 Gregory Vardarinos talked to Greek News Agenda* about how this catastrophic event influenced the entire history of Thessaloniki, noting that this documentary has deeply touched the Greek audience because it is rich in emotions and provides a unique cinematic experience. He emphasized the difficult but constructive experience of managing and selecting a large amount of rare material. He stressed that filming in Greece during the financial crisis, as a young director, is as difficult as in the pre-crisis era, however he believes that positive growth prospects regarding Greek cinema production do exist, as is the case with EKOME (National Center for Audiovisual Media & Communication) launch.

What intrigued you about the most destructive fire in Thessaloniki's history upon its 100th anniversary? What does this incident mean for the city's evolution?

It was probably random. I was working on another project for the city of Thessaloniki and I came across an album with photographs picturing the city before and after the disaster. It was "The Chronicle of the Great Fire" by Aleka Gerolymbos. Gerolymbos, an excellent scientist, builds the disaster chronicle through images of that time and true testimonies. These testimonies of the fire were so brilliant that they instantly caught our attention and we appreciated their potential to tell a captivating story. We momentarily experienced what the inhabitants of Thessaloniki experienced and we were in awe. We realized the magnitude of the disaster. It is an anthropocentric, largely unknown story that we were keen to narrate.

After all, this fire means the passage from a medieval, Ottoman city with its dead-end streets, alleys and oriental markets to a modern, western city, with an administrative center, courts, and town hall. This particular fire was not the cause, but the reason for this passage. There had also been other fires in the past. However, this one coincided with the conjuncture of Eleftherios Venizelos government that seized the opportunity to commission the French architect Ernest Hébrard to design a new urban plan.

In the documentary, you focus on the key role of the architect Ernest Hébrard. As a film creator, you spent a long time on archival research, and you are a contemporary dweller of this city; how do you evaluate the architectural choices of that period?

We would say that through our research, we traveled to the past, we learned a lot about the history of our city that we previously did not know. We realized that today's Thessaloniki has taken the concrete form it took through a series of events (e.g. wars, influx of refugees, land expropriations, expansion), but the catalyst was the great fire of 1917 and the Venizelos government decision to rebuild the city on the basis of the Hébrard plan. The city was born again through the fire and through its ashes, just as our title denotes, The Great Fire of Salonica: Birth of a City. 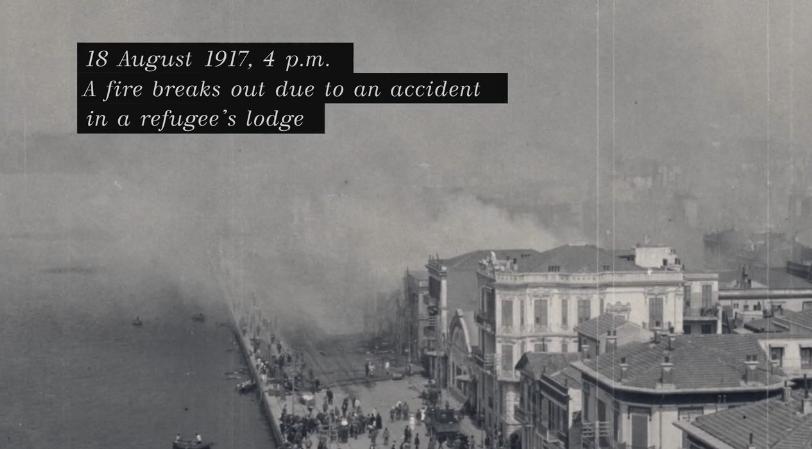 I believe that the choices of that time were, in fact, very positive with regard to the construction of new roads, letting the sea breeze circulate inside the city, highlighting monuments and providing open urban spaces (public squares), the conservation of the old Upper City (Ano Poli) and creation of the Sheikh Sou forest (Cedar Hill). It is the blueprint on which the city grew in the next 50-70 years and partly continues today. It is certainly not perfect, nor should we be nostalgic for the older, lost Thessaloniki. The plan bears the marks and biases of its era: it was a colonial project in terms of aesthetics like other projects that were implemented, for example in Morocco and French Indochina. The demand for the creation of a distinct national identity remains, whether it be in the national architecture or in the national cinema, or anywhere else.

Why do you think the audience was attracted to your film?

This journey into the past, which comes to life through original testimonies, generates strong feelings. Moreover, it is the awareness of what was lost in Thessaloniki from the destruction of invaluable monuments of the Jewish and Ottoman heritage. It is a rich cinematic experience, a pleasurable narrative of pictures and sounds that you do not expect to find in a historical documentary, which usually thought of as scientific, boring and didactic. The audience experiences the feeling of being present, bearing witness to the burning of Thessaloniki in August, 1917. When the film finishes, the viewer feels complete, both in terms of emotions and knowledge of the events.

In the documentary, you brought into light original, visual archival material hitherto unknown to a wider public and, as a matter of fact, you showcased it in high definition. How did you work and what difficulties did you come up against, in terms of collecting and presenting this material?

The archival material is well known to academics and researchers. It is available to everyone as long as they are willing to study and delve into a little further. The difficulty was in managing it and the choices we had to make. On the one hand, due to budget constraints, we could not buy the rights for as many minutes of archive films we wanted, and on the other hand there was the moral issue of representing a long gone era and its people. We worked hard to be faithful to the spirit and the essence of the multicultural, multi-religious Thessaloniki of 1917 without sacrificing the cinematic virtues of the documentary. 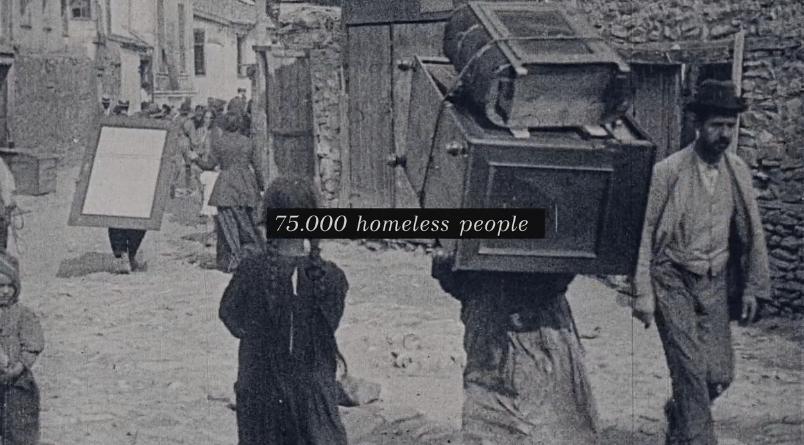 What is it like for a director of your generation to film in Greece during the financial crisis?

It is just as difficult as it was in the pre-crisis era. The weaknesses of Greek cinema are fundamental and recurrent. There is no stable, long-term regulatory and development framework for Greek cinema. In other countries, incentives and tax breaks are provided to promote domestic productions. In France, there is a quota for the national program in cinema and television. Here, even tax refunds on cinema tickets playing Greek films, as well as the special ticket fee granted to the Greek Cinema Center, were abolished. The National Broadcaster (ERT) is under-performing in the production of fiction, while private channels are non-existent (except pay-TV). The Greek cinema institutions are at the mercy of the country's political life. Unfortunately, they are linked to the life-cycle of each government or minister of culture. The recent launch of EKOME (National Center for Audiovisual Media & Communication) has been a positive initiative. It has yet to prove its viability in the long run and through governmental changes. If it succeeds in doing what is written in the statute, it can make Greece a major host of international productions and become a vehicle for the growth of the domestic creative industries.

Do you see positive growth prospects regarding Greek cinema production?

Greek cinema has significant and successful participation in international film festivals and international co-productions. It has evolved significantly, mainly thanks to the individual efforts of the filmmakers. What matters, as I have said previously, is robust, institutional, long-term State support, but also commercial impact within Greece. What do I mean? There are 20-25 distribution companies, and 15 films are released every week at the cinema, and cinemas are very specific: most of them show blockbuster movies and only a few cinemas – which you can count on one hand - screen Greek films and independent productions. In a country where statistically, the average Greek goes to the cinema once a year (!), cinephiles at best reach 300,000, you realize that it is very difficult to find distribution channels and reach local audiences. Of course, there are few films that are not poor quality imitations of television material, or strictly art-house movies. The very few narrative Greek films are doing well at the box-office. So theaudience that wants to see a Greek film does exist. We just have to listen to this audience needs and not be self-centered artists.

Trailer "The Great Fire of Salonica: Birth of a City"

** The next festival screening of the documentary is at LAGFF 6-10 June, while in May 31st it will participate in Consonances 2018 by Onassis Foundation Scholars Association in Onassis Cultural Center. A sample of the soundtrack will be performed live on stage accompanied by excerpts of the documentary.

Read also: One more reason to film in Greece: A new legal framework of economic incentives, General Secretariat for Media and Communication boosting Greek Gaming & Animation, Lefteris Kretsos on bringing Greece on the global map of the Game and Film Making Industry