Quo vadis Europa? | A Franco-Greek conversation about Europe and its future: two interviews following the “Days of Athens” forum

The weekly French news magazine L'Obs and daily Greek newspaper Kathimerini organised a “Days of Athens” forum, themed “Greece: The paths of hope”, on February 8- 9, 2018. The forum, hosted by the Stavros Niarchos Foundation Cultural Center, brought together a number of notable figures from the fields of politics and economy in Greece and France, who discussed various issues concerning the relations between the two countries and the current situation within the European Union. Our sister publication, Grèce Hebdo*, acquired interviews with the main participants: Matthieu Croissandeau, editor-in-chief of L'Obs and co-organiser of these days of debates, and Hubert Védrine, former Foreign Minister of France and author of the book Save Europe. The discussions focused on the relations between Greece and France, the political issues of a common future, as well as the particular role of the European Union in this context.

Why such a conference organized by l'Obs today in Athens, in the heart of Greece?

L'Obs has a special history with Greece and Athens. This is the second time we have organized such an event, after the one we had five years ago. We are close to Greece because it is at the origin of our culture and we share an incredible number of values. The country has suffered since ten years ago because we know we imposed an austerity program that was dictated the the population has made colossal efforts, led by the the governments. It seemed important for us, ten years after the start of the economic crisis, to come back to Greece and make an assessment of the State, its economy and its society. At the highest point of the crisis, in the summer 2015, L'Obs engaged itself with a very powerful cover title: "Never without Greece". We never considered Greek people to be cheaters or lazy and we always defended the place of Greece inside the European Union.

Even if Greek people had the occasion to denounce the austerity measures imposed by the European institutions, during the referendum of July 2015?

I hear what you are saying but the place of Greece is, for us, absolutly and without any debate, in Europe. Then, how these measures have been applied, dictated or imposed, these are questions we would like to ask during these two days of debates. The reform agenda that has been carried out allows, in a macro-economic point of view, to look at the first results: growth is coming back, - certainly not at the same level as before the crisis - but the indicators are rather good, like the one concerning the public deficit. But do Greek people realize all the progress that is being done? The answer is no. These macroeconomic issues mainly reassure the investors, the public market and the European partners. Nonetheless, a gap between the first positive indicators and the reality lived by the population still remains. We are also experiencing this phenomenon in France, even if we have not consented to the same measures as the Greeks.

It was therefore important for us to come back with a perspective that was to show that this is not only a debate about Greece. The Greek case allows us to think about our relationship with Europe and about how the European institutions are functioning. A well-known English footballer, Gary Lineker, once said: "Football is a simple game, twenty-two men chase a ball and at the end the Germans win". We can ask each other if the role of Germany in the management of the Greek crisis is not, in a way, a parable of this. It means that, in the end, it is one who hits the table the hardest that wins. Overall, the reform agenda set up by Alexis Tsipras has been dictated by a consultation and discussions that took place between the European partners. 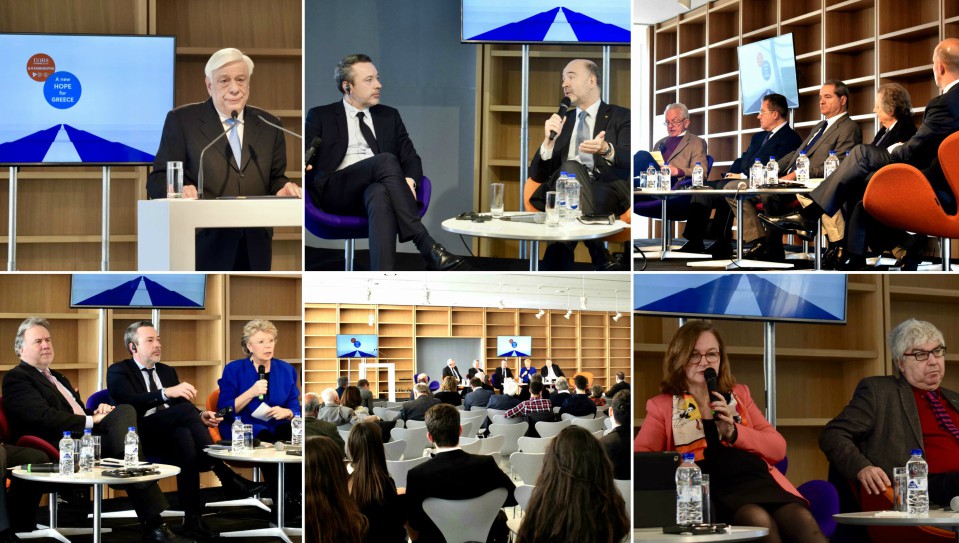 The fact is that he was elected on an anti-austerity program by the Greek people, what does it mean to you?

Indeed, it poses a true democratic question about what is the democratic control concerning the way these negociations are taking place in Europe. For example, like with the Eurogroup, we can clearly see there is a democratic part that escapes us. We don't attend these meetings, we don't know everything about the issues and the people decide only every five years through the European Parliament or through national polls. This question of democratic control is really at the center of our concern.

The other question that is being raised deals with the efficiency of this economic policy led by the European institutions. Are the austerity policies imposed on Greece efficient? We said it, it fills macroeconomic barometers and, sometimes, it helps reduce unemployment like it did in Spain and Portugal, but the question is to know if there are other ways of doing it. Was it necessary to make Greece pay? Wasn't there a punitive side to the measures taken? These are questions that need to be asked.

Finally, the third issue is linked to the question of the democratic control and deals with transparency. The European system is badly known by its people, some decisions are taken either in private between heads of governments and states, or under the weight of lobbies at the European Commission. There is a question of transparency that arises. All these issues, democracy, efficiency and transparency, are issues we wanted to bring, beyond the Greek case, to the center of the debate through this conference.

Besides the cradle of the democracy or the Greek philosophers, what is, for you, the particular relationship between Greece, France and Europe?

For Greece and Europe, it is very clear. We know it, the name of "Europe" comes from Greek mythology. Europe is obviously Greco-Latin because, as you said, Greek philosophers and democracy ; all this was born in Greece and flourished around the Mediterranean rim and on the European continent. Romans, having taken up these principles, made the civilizational bases of Europe inspired both philosophically and politically by Rome and Greece. It is also spiritually inspired by Judeo-Christianity. All of this obviously intersects and is central to our civilization.

Behond that, France and Greece are living an old love story like history can teach us. We can see huge places established by the Franks on the Crusades route, like in Monemvasia or in Mistra. There is obviously a footprint linked once again to history. If you take the 19th century, with what we call the "philhellenism", intellectuals were committed, like the writer Victor Hugo or the painter Delacroix, during the country's independence war against the Ottoman Empire. France was inspired by what Greece inspires beyond its borders and what it represents. At the end of the colonels dictatorship, in 1973, France was in favor of the entry of Greece into the European Union. It wasn't obvious at the time, but it was a strong political move to say that Greece was a part of Europe.

Concerning business, a lot of French companies invest in the country. In tourism, it goes both ways, but a lot of French people come to visit Greece, and still during these years of crisis. Exchanges between France and Greece are numerous, on cultural, political and tourist levels at once.

Don't you sometimes think that we tend to hide the centuries of Ottoman occupation and its influence by maintaining only a spirit of philhellenism?

Yes, we often tend to digress by considering that the Ottomans were occupiers. Of course they were for the Greeks, but they also left huge footprints and marks on Greece’s history. We hear less about it, indeed, because we have a very European-centered point of view and because the relationship with Turkey is not great at the moment. 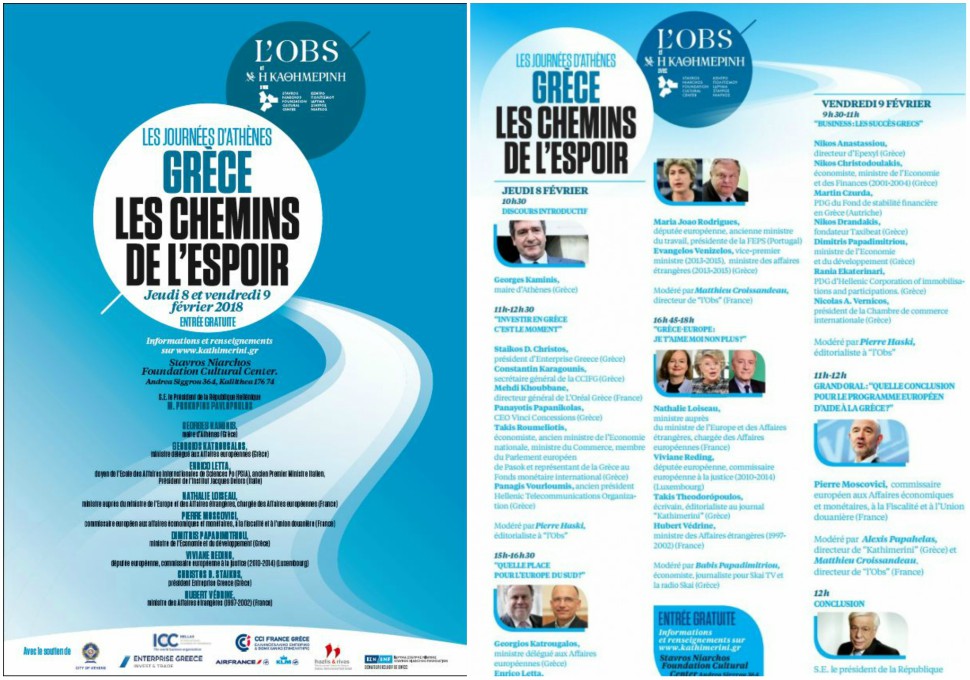 How could hope in Europe be revived, in order to make Europe attractive again?

It is a very vast topic, and it does not only concern Greece. We have to keep in mind that, no matter what is being said, construction of Europe has never been the result of popular demand. This hope is sustained by small groups. What we say now about European integration is largely reinvented, a kind of fairy tale, where Europe made peace after WWII, while Americans and USSR made peace in Europe. It is the Atlantic Alliance that protected half of Europe and the founding fathers of Europe were in favour of the Atlantic Alliance, protected by the United States against the Soviet threat, this is obvious. That is why the European community was an economic alliance, to begin with, protected by NATO and organized as a common market.

It is only since the legendary period of Mitterrand/Kohl/Delors that new concepts appear. Here again, it does not by popular movements. Let us remember that the referendum on the Maastricht Treaty, whereas all the big powers were in favour, ultimately there was just one crucial point to override. Therefore we won’t recover a spirit that did not exist. We have to convince the public again.

What are the issues facing Europe and what would be the solutions to bring back "hope"?

There are anti-Europeans everywhere. I am not talking about Eurosceptic groups. Media should not mix up these two terms. They are not the same. Eurosceptics can change their mind whereas anti-European from the Far- right or Far- left parties are not going to change. The sceptics, those who are discouraged, to whom we made a lot of promises like a social Europe or those who react to what Jean-Claude Junker himself calls an "excessive regulation", are not anti-European but they are upset by what Europe has become.

The future is to convince this part of the society to swing back to the pro-European side. If we manage this, the European project will get back its strength. If we don’t succede, in the best case, it would be stagnation. To suceed, it is not sufficient to advance traditionnal pro-European arguments. In 1992, in France, saying Europe is peace, youth and future did not win any votes in favor of pro-Europeans. We have to give what the people are asking for. A certain identity, sovereignty and security. Nevertheless, it has been thirty years that the elites reject all this by saying it is disgusting, awful and extreme, whereas these are normal and ordinary requests. If there are no reasonnable answers from pro-Europeans, there is a threat that anti-Europeans will increase in numbers.

How would you imagine European Union in ten years and when could we consider a completion of the construction of Europe?

I don't believe in a breakdown scenario. Nobody wants to follow the UK example. There is also a risk of regionalism that would weaken Europe greatly, but it is not a general case. I don’t belive in the worst case-scenario. I also don’t believe in a scenario of an « outburst » like the federalists expect. I don’t believe at all in this huge "outburst" that would change everything. No nation in Europe would accept to give up its sovereignty in favor of the Commission or of the European Parliament.

I believe in intermediate scenarios, more or less good. The German government can respond positively to Emmanuel Macron on certain points like the improvement of the eurozone, a Europe that protects to some degree, a vigilance concerning foreign investment and about less social dumping. Not a complete revolution but some improvement. We can be reasonnably optimistic on this basis. But we should rethink our approach by comparison with the rest of the world. I am going to show my true French colours, but seems obvious to me that Europe should become a major power. So it can exist opposite the United-States, China and Russia, or at the very least so that the others do not decide for us.

*Interview by Hugo Tortel. Translation from French by Johanna Bonenfant and Hugo Tortel