Reading Greece: Orfeas Apergis on Poetry as Ferment, Experimentation and a Promise of Revolution

Orfeas Apergis (Athens, 1974) is a poet, essayist and performer. He has worked variously as a hospital doctor, army doctor, real estate agent, political consultant, classical singer, but mainly as a school teacher in Athens. He has been publishing in Greek literary journals and newspapers since 2006. His collected poems appeared in 2011, under the title “Y”. He has translated Byron, Bronte, Browning, MacNeice, Larkin, Hill, Muldoon, Williams, Bishop and Duncan, among others. 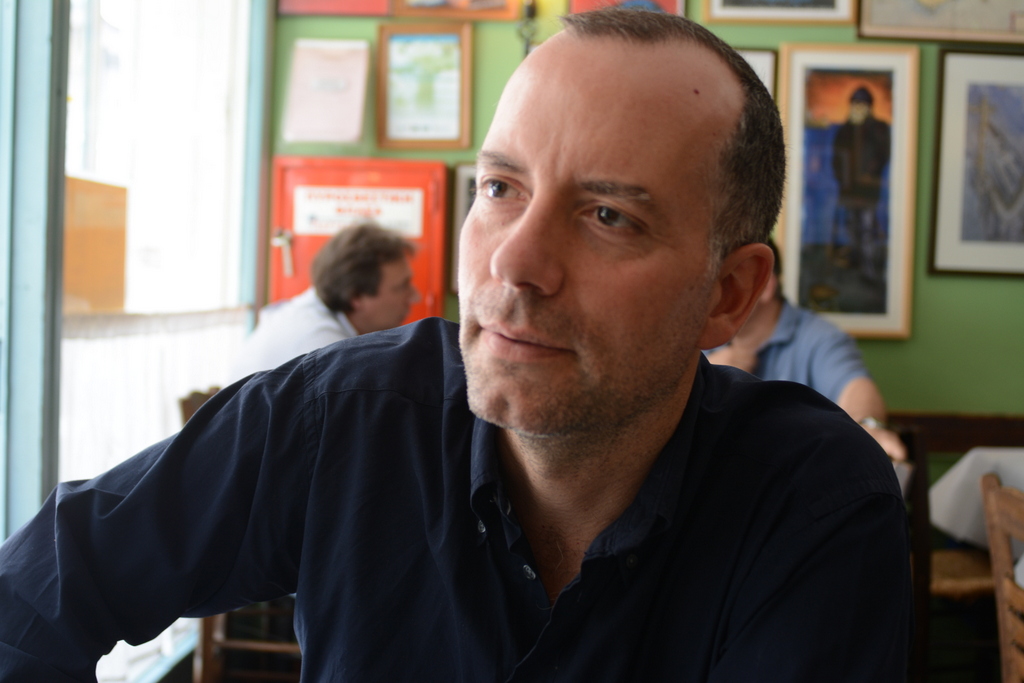 In 2013, he was poet-in-residence at King’s College, London, and visiting poet at the University of Barcelona. His work has been included in the English anthology Futures: Poetry of the Greek Crisis (2015), the Spanish anthology La Busqueda del Sur [In Search of the South] (2016), and the German anthology Dichtung mit Biss [Poetry with a Bite] (2018). His work has also been translated into Swedish and French. His latest volume of poetry, entitled I glossa tous [Their tongue], came out in early 2019.

Orfeas Apergis spoke to Reading Greece* about his latest writing venture I glossa tous [Their tongue], noting that the book may be read as “a miniature epic of the creation of a (creative?) self, where collective trauma is experienced as personal trauma and vice versa”. He explains that he has slowly developed “the notion that poetry should move away from the fragmentation of form introduced by modernism” and become close to what he calls “fluxional poetry”, “a narrative flow which recounts real-sounding stories, with beginning, middle and end, stories which are accretions of a lot of detail seemingly—but not really— superfluous or incongruous”.

Asked about the extraordinary burgeoning of poetry in recent years, he comments that “we, from the West, and we, Greeks magnify an extant, existing activity which has been humming along beautifully or not so beautifully but insistently for decades now, into a “new burgeoning”, a late or very early new flourish” urging to “let us poets recognise and acknowledge and celebrate and respond to the perceived increase in poetic output by re-fulfilling this self-fulfilling prophecy”.

Your latest writing venture Τheir tongue has just been published by Nefeli Publishing. Tell us a few things about the book.

All explanations and explications of their own work by the poets themselves should always be treated with caution. To draw some examples from our most ‘canonical’ poets, Elytis was furious when the philologist Lignadis published the poet’s personal “plan” for the entire Axion Esti, his most famous poem. Seferis was really cautious about explaining his Kichli and when he did eventually produce some explanatory notes/remarks, upon the insistence of some of his friends, these did not make them nor do they make us a lot wiser. Similarly, Cavafy’s explications of his poems are rather pedestrian and uninspiring – no wonder he kept them more-or-less private! In other words, poets are not the best readers of their own words!

Given the above, and all of the above notwithstanding, I could suggest one may read «Η γλώσσα τους» as a miniature epic of the creation of a (creative?) self, where collective trauma is experienced as personal trauma and vice versa. The traumas of the violent 20th century are re-dissected; they sound like family accounts of World War II and civil war atrocities, which do not make a “next generation” subject recoil in horror but, rather, fascinate. It’s a book about this fascination exerted on one by family secrets and familiar/familial wounds, and how the younger perceiving subject gets over this fascination to maybe say, or better, feel something meaningful about times present and times beyond. This new “meaningfulness” becomes a flux of felt thoughts, or thoughtful feelings, in the more opaque third section of the book, which is called “A little philosophy in the dark, with big room for explications”; so the whole idea of explaining poetry (or “explaining it away”!) does become a theme of the book.

In general, it should be approached as a fully laid out structure, like a “poetic house” (we do say poetic “stanza”, i.e. room, after all, do we not?), not as a selection of poems chosen from the ones I’ve written over the past few years. I don’t believe in self-anthologising; I’d much rather have a house built from scratch, so a book of poetry is, in my eyes, such a structure-from-scratch, a very fluid one at that.—See? I told you that poetry exegesis is rather terse and uninviting! 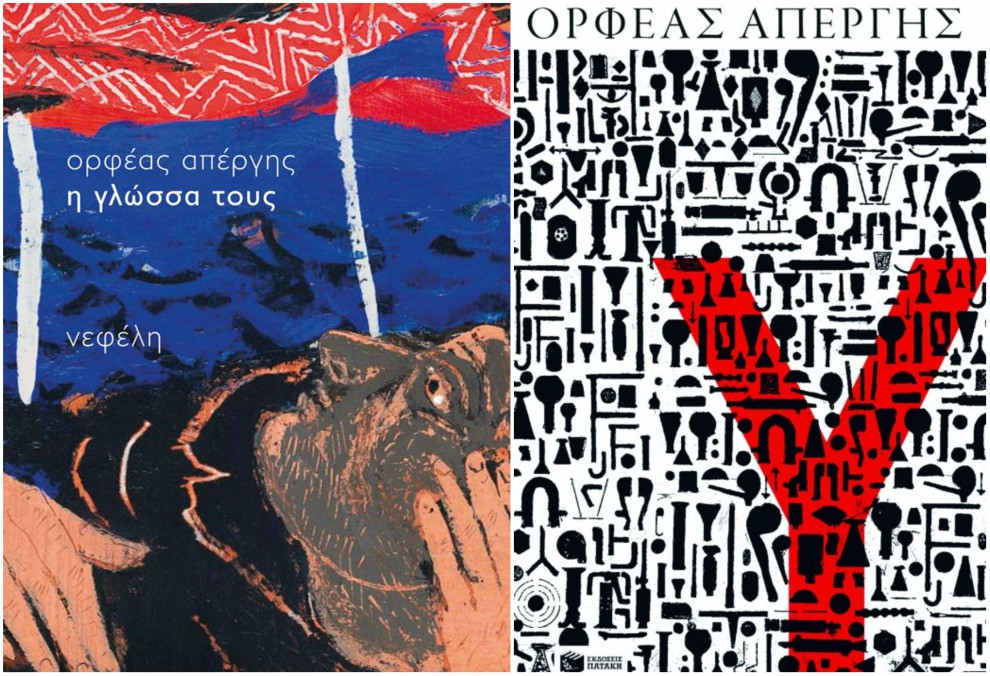 Have there been any recurrent points of reference in your poetry? And, in turn, how has your poetry evolved over the years?

I’ve slowly developed the notion that poetry should move away from the fragmentation of form introduced by modernism and become something closer to what I call “fluxional poetry”, i.e. a narrative flow which recounts real-sounding stories, with beginning, middle and end, stories which are accretions of a lot of detail seemingly—but not really— superfluous or incongruous. In addition, I feel the need to return, or at least hope to return, to some kind of faith, i.e. move away from postmodern eclecticism, in all but form. In other words, one may use formal eclecticism, pastiche, allusion, reappropriation, subversion, play, humour, but may at the same time aim for some deeper wellspring of truth. The truth we always repress, so it just gets inscribed into whatever we write, like Holbein’s skull in “The Ambassadors”, which, albeit invisible, always looms large on the surface of things. That’s why ignoring some sort of philosophical truth-seeking through poetry may only be done at your (and poetry’s) own peril!

You argue that “the new poetry, mine, maps a course from the west to the east without ever touching these two boundaries”. Tell us more.

I lived in the UK for many many years, too many for my own good—or, as I feel on other occasions, too few for my own good. In this, I feel closer to the Greek poetic generation of the 1930s, the great Greek modernists who were fluent in two or three major European languages; that is my “West”. The East you slowly discover if and when you decide to come back to Greece, and live in Greece not by default, as at birth, but by choice. It’s not always a very conscious or deliberate choice, but it does make you deliberate at length on what it is that makes the East so different. I feel like I’ve recolonised Greece, I feel colonial and post-colonial, I exoticise the place like Byron or Chauteaubriand would do, and I don’t feel any special privilege in writing in Greek; I could or would have written my poetry in English, save for the fact that I don’t have a complete feel for the language. So it’s all been an experience of inbetweenness—neither here nor there, the usual globalization stuff really—however, I would rather call it a here-and-there-ness, not a being in between but a being in both places at once, with the added difficulty that these are not real, objective, “out there” places after all. Both East and West and Greece and Britain are provinces of the mind.

In recent years, there has been an extraordinary burgeoning of poetry in every form: graffiti, blogs, literary magazines, readings in public squares to mention just a few. How is this trend to be explained?

There usually is what we choose there to be. It’s a perceived or “interpellated” or named burgeoning; we make it happen as we name it. So the question would be why do we— readers, audiences, communities, networks—feel the need to say that there is a burgeoning of poetry, a revival of sorts? One explanation is that this whole descriptive discourse is a neat example of post-colonial exoticism: let’s go to Greece to see a real crisis, a proper rundown devastated city, like we used to go to Africa to see the real jungle. In this very neat discourse, poetry fits in like a glove unto a not-so-delicate hand; poetry is experimentation, ferment, avant-garde communities, in short it’s a shorthand for radicalism and the promise of some sort of revolution or, at least, difference. So we, from the West, and we, Greeks (as native informants and subalterns, to recall Spivak) magnify an extant, existing activity which has been humming along beautifully or not so beautifully but insistently for decades now, into a “new burgeoning”, a late or very early new flourish. 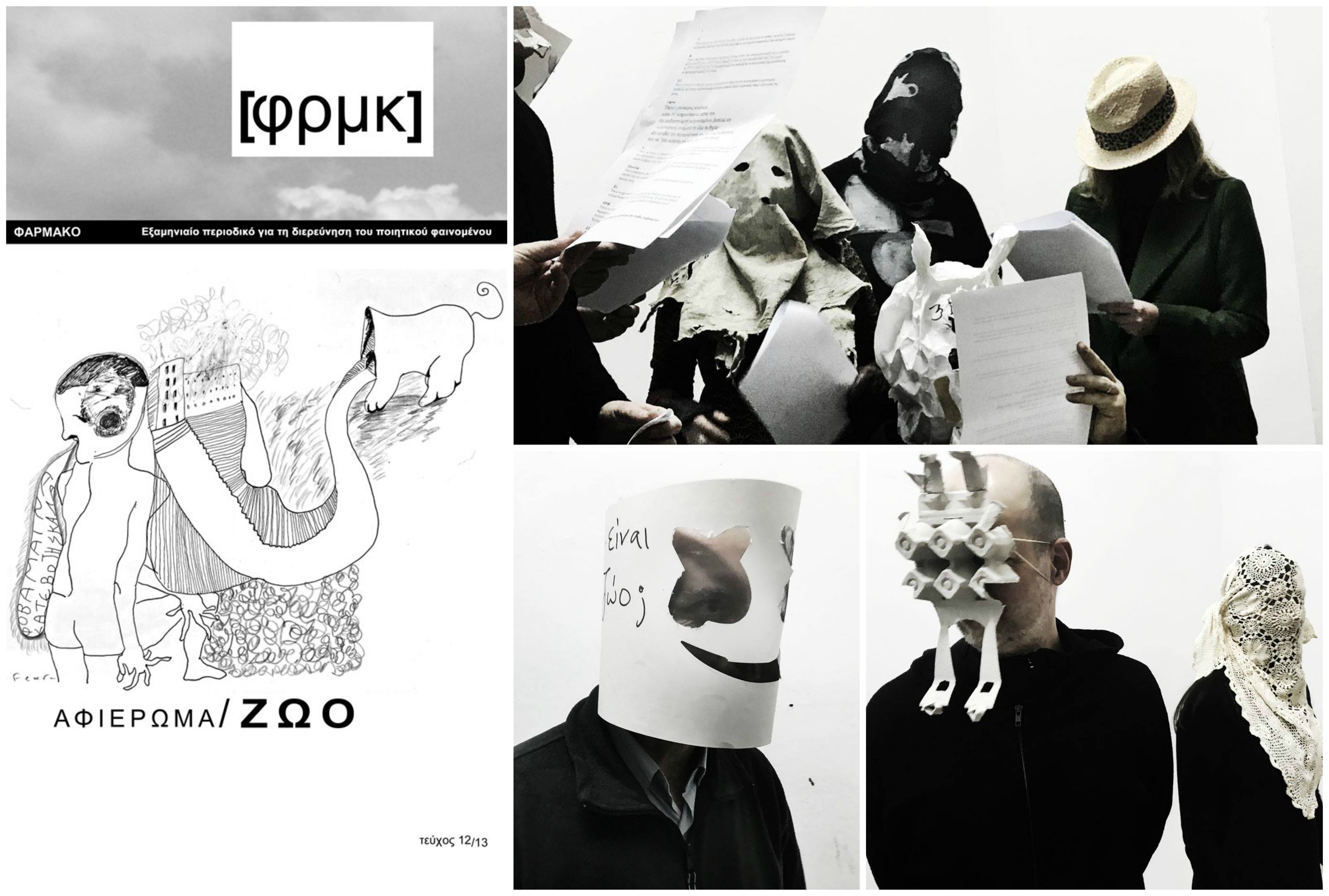 But why do we, as audiences, feel we need to create this revivalist discourse about poetry? Maybe because we are indeed in urgent need of a revival, maybe because we need a choice again, not a choice between the Trump tower and the New Ritz in Paris, but a real choice, and poetry (as a way of truth-seeking about good living, once more) may, just may, be one of the means we have to get to have some real choice again, here and there and everywhere.

All of the above being as they may, it’s good to feel some sort of spotlight warming the cold members and extremities of poor old poetry once more. So let us poets recognise and acknowledge and celebrate and respond to the perceived increase in poetic output by re-fulfilling this self-fulfilling prophecy!

How do you respond to those that talk about a “Greek poetry of the crisis” and “a new generation of Greek poets” that in a way resembles the generation of the 1930s?

Karen Emmerich argues that “translation is not a mere transfer of a given ‘original’ from one language into another, but a process by which an original is, in a sense, ‘fixed’ or created, as translators often have to adjudicate between multiple editions or versions of a text”. In this context, where does the role and responsibility of the translator lie?

Translation is a whole big chapter in the creative writing arts. It’s writing—dah!— but it’s always already creative and arty. In other words, it’s a craft, and beyond that it must be crafty, by being creative in a destroy-and-reassemble kind of way. So you take a work apart and put it back together again, to the best of your intentions and knowledge and craft—you do indeed fix it, but it’s not like fixing a butterfly you’ve just caught in your lepidopterological endeavours; it’s like putting it in a cocoon of your own making, aiming and hoping to get a new, quite different butterfly emerge out of your cocoon, with an equally admirable ability to fly and hover and land compared to its originary butterfly. Needless to say, a lot of this translational cocooning goes wrong—how could it not?—so you end up with beautiful collections of dead butterflies; they all have brilliant colours—still!—but they are distinctly unable to fly.