Eleni Papalampropoulou was born in 1980 in Athens. Her poems have been published in literary magazines and anthologies. Her first poetry collection titled Διάφανο Καταφύγιο [Transparent Shelter] (Thraca Books, 2019) was shortlisted for the best newcomer poet of the literary magazine O Anagnostis. In cooperation with the Lighthouse for the Blind of Greece, the book was transcribed and printed in the Braille reading and writing system. 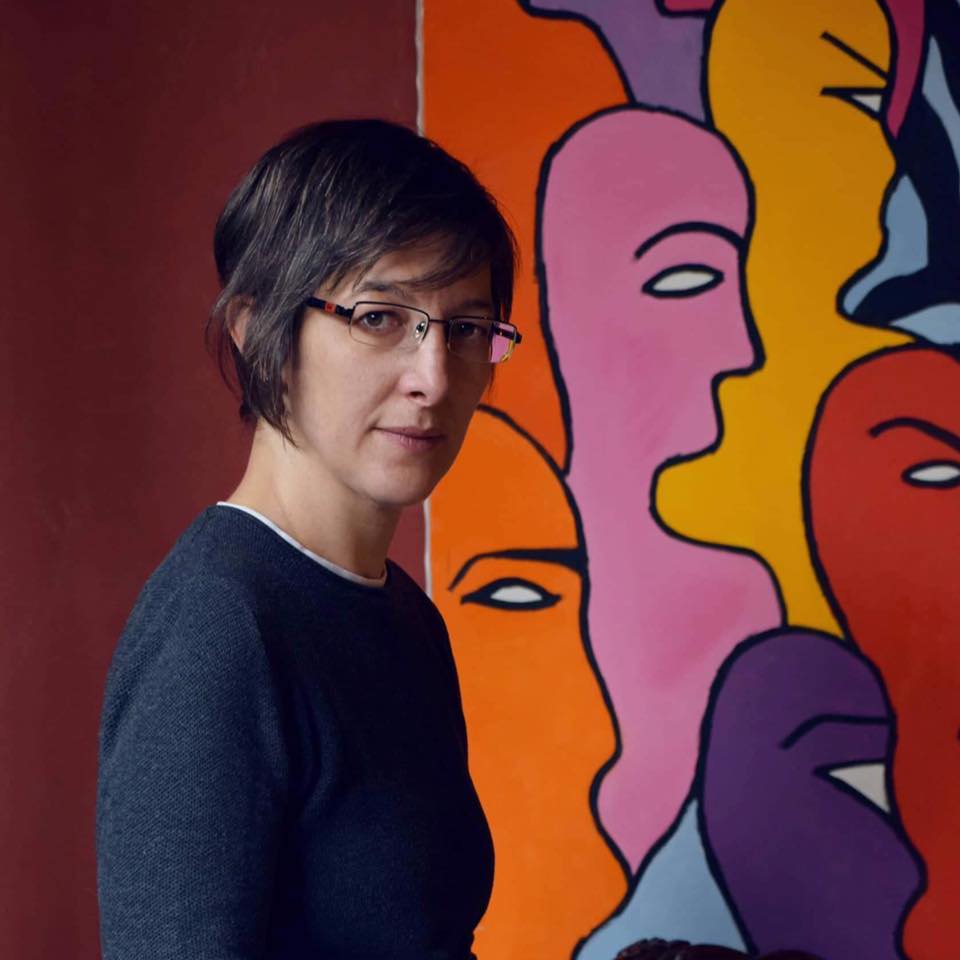 Υοu are the editor of Poetry in Braille, an anthology of Greek poetry written for the blind. Tell us a few things for this venture of yours.

Ιt’s an anthology of contemporary Greek poetry in the Greek tactile reading and writing Braille system. It constitutes the result of our effort to bring Braille to the fore and raise public awareness in this respect through poetry and at the same time to enrich e-books available on the internet for the non-blind who are learning the writing system and for educational purposes in general. During my training in Braille, I was looking for practice texts on the internet and so I noticed that there were scarce; it’s this scarcity that the present anthology aims to remedy. Thee-bookalong with the special file that is used in a Braille printer are available free of charge for anyone interested.

Which were the main challenges you were faced with while transcribing the poems in Braille?

If you know Braille well, transcribing the poems is in itself a pleasant and simple procedure. The major challenge for me was to find the poets who would be willing to participate with their poem in the action. Fortunately, all participants were eager to participate and trust me with their excellent poems. A second challenge was to find a way to communicate this action to a wider public; taking advantage of technology and promoting the poems on the social media proved quite helpful in achieving my goal. I am really grateful that participants and the public so movingly embraced this action.

Similar initiatives are quite scarce in Greece. Which do you consider to be the main difficulties which obstruct such projects?

In most cases, there is no support nor guidance from any institution and as a result people who are really interested don’t know how to start or where to search for. Another serious deterrent is the financial part (e.g. the printing cost) which is borne by the creators themselves. I reckon that most writers would like their book to be transcribed and printed in Braille but cannot afford to do so. 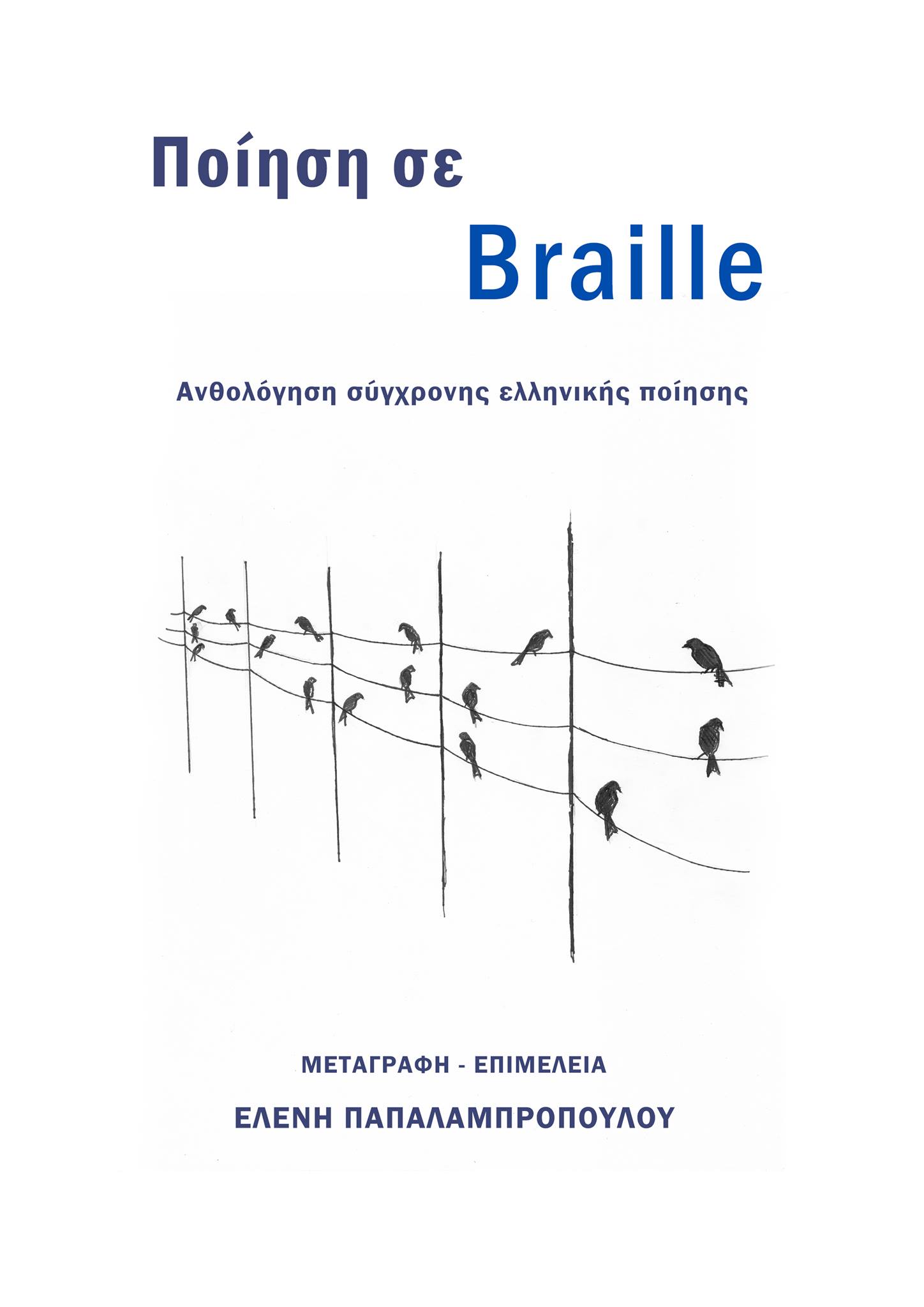 You have characterized Braille as “an encryption system and at the same time a puzzle”. Could you elaborate on that?

Named after its inventor Louis Braille, Braille is made up of six raised dots arranged in threes in two columns, resulting in 63 combinations that replace letters and numbers. Similarly, the encryption systems convert the original text into an alternative format and the recipient must know how to decrypt it in order to be able to read it. A text, a page full of raised dots, a puzzle that at first you don’t know what it says but then, during its decryption, its content reveals itself before you. Learning Braille is a wonderful process, opening up a whole new world and I highly recommend it.

Being a poet yourself whose book has also been transcribed in Braille, tell us about this interest of yours in Braille?

My love of writing along with my awareness of people with disabilities brought Braille into my life. Learning Braille has been one of the most beautiful things I have ever done. One of the reasons I started learning it was to be able to write poetry in Braille. My initial idea was to publish a poetry collection both for the blind and the non-blind but this was impossible mainly due to the different paper, the cost and the production time. Thus, my poetry collection titled Διάφανο Καταφύγιο [Τransparent Shelter] was printed only for the non-blind. Yet, in collaboration with the Lighthouse for the Blind of Greece, I managed to transcribe it, print it and send it to institutions and libraries in Greece and Cyprus so that people with visual disabilities could also read it. This is something that has filled me with tremendous happiness and Ihope I can do the same with every book I publish in the future.

Which initiatives do you consider necessary both at a state and a private level that will enable and foster access of the blind to literary texts?

The state, in collaboration with people and institutions of culture, could inform and raise awareness through more campaigns and other actions so that a wider audience gets acquainted with what Braille is and how to learn it. I reckon it is very important to bring Braille to the fore and to put it in our daily life not as something strange, as something that concerns other people, but as something that concerns all of us, as something through which we ensure that all people have equal access to knowledge and literature. At the same time, the state should ensure, with funding where needed or in any other way that falls within its responsibility, the transcription and printing of books so that literary books are also available in Braille at schools, libraries, bookstores, wherever there are books for the non-blind.

For Poetry in Braille available in PDF form click here.