BOOK OF THE MONTH: ‘Eva Palmer Sikelianos: A Life in Ruins’ by Artemis Leontis

Eva Palmer Sikelianos: A Life in Ruins (2019), just published in Greek as Εύα Πάλμερ Σικελιανού: Υφαίνοντας τον μύθο μιας ζωής (2022), is the first biography to tell the fascinating story of Eva Palmer Sikelianos (1874–1952), an American actor, director, composer, weaver, and queer performer best known for reviving the Delphic Festivals. Yet, as its author Artemis Leontis, C. P. Cavafy Professor of Modern Greek and Comparative Literature at the University of Michigan, reveals, Palmer’s most spectacular performance was her daily revival of Greek life. For almost half a century, dressed in handmade Greek tunics and sandals, she sought to make modern life freer and more beautiful through a creative engagement with the ancients.

Leontis focuses on Palmer Sikelianos’s attraction to Greece and her indefatigable determination to revive the “life in ruins” (the subtitle Leontis chooses in English) that suggested alternatives to the direction of modern industrialized societies. The book’s five chapters each bear the title of one of the media in which Palmer Sikelianos worked: “Sapphic Performances,” “Weaving,” “Patron of Byzantine Music,” “Drama,” and “Writing.” The“Chronology” and “Cast of Characters” summarize significant events and personages. 56 figures from archival sources, including staged photographs, drawings, diagrams, and pictures of objects, represent the wealth of archival sources. Weaving is a running theme, as the Greek title suggests. Its centrality both confers respect on this typically women’s art of textile production, which Palmer Sikelianos cultivated with great skill and artistry, and observes thepower of weaving imagery to entrap women in reductive narratives that silence them as a way to preserve their purity.

The “Introduction” and “Epilogue” frame the book as the author’s own decade-long search for hidden or neglected remnants to tell a richer, deeper and more revealingly complex life story than the formulaic one that has prevailed since Eva Palmer Sikelianos’s death. Ιn an interview to Greek News Agenda, Artemis Leontis commented that “the book addresses the erasure of women, particularly queer women, and other marginal groups from history”, adding that “Eva Palmer Sikelianos has been strangely invisible in cultural history, even though she is a crucial link connecting the search for new identities and artistic forms in the early twentieth century with classical learning.”

Eva was a non-conformist. In Paris in the early years of the 21st century, she was a founding member with Natalie Clifford Barney and Renée Vivien of an important Lesbian circle of artists and intellectuals. In Greece for the next 27 years following her marriage to Greek poet Angelos Sikelianos in 1907, she promoted endangered musical practices, weaving, and handicrafts as forms of resistance to economic domination by the West. With Angelos Sikelianos as the public face of the events, she produced and directed two festivals of drama and games in 1927 and 1930 in the archaeological site of Delphi. The Delphic Festivals—expressions of an international modernist reception of Hellenism—used modern Greek expressive means to signal Greece’s transhistorical survival. They helped popularize the performance of Greek drama in ancient sites in Greece. 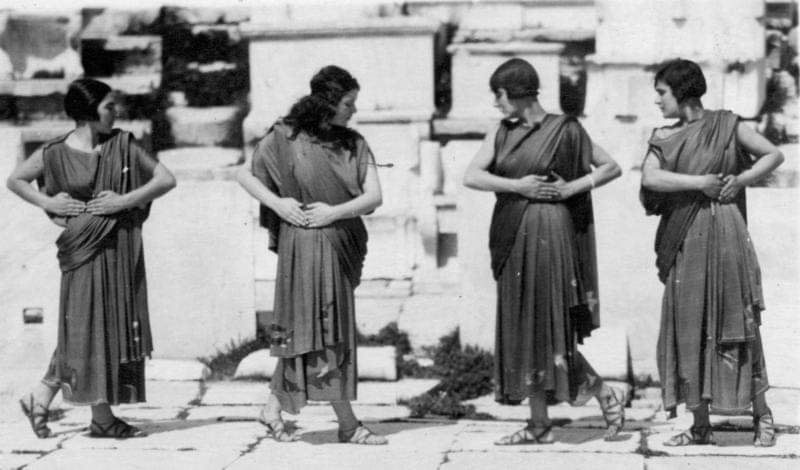 Through Eva Palmer’s performances of the Greeks, we see the anachronistic temporality of other modernist projects that moved not progressively forward toward fulfilment, but backward, into the gaps of history, to recover a past that never was in order to suggest an as yet unimagined future. As Artemis Leontis eloquently put it, “My hope is that a textured interpretation of the life of Eva Palmer Sikelianos, who, for the first half of the twentieth century, sustained a conscious practice of living differently while absorbing the shocks and heartbreaks of nonconformity, might serve as a meditation on our times”.