Rethinking Greece: Gavrilis Lampatos on the Communist Party of Greece and the country´s public history 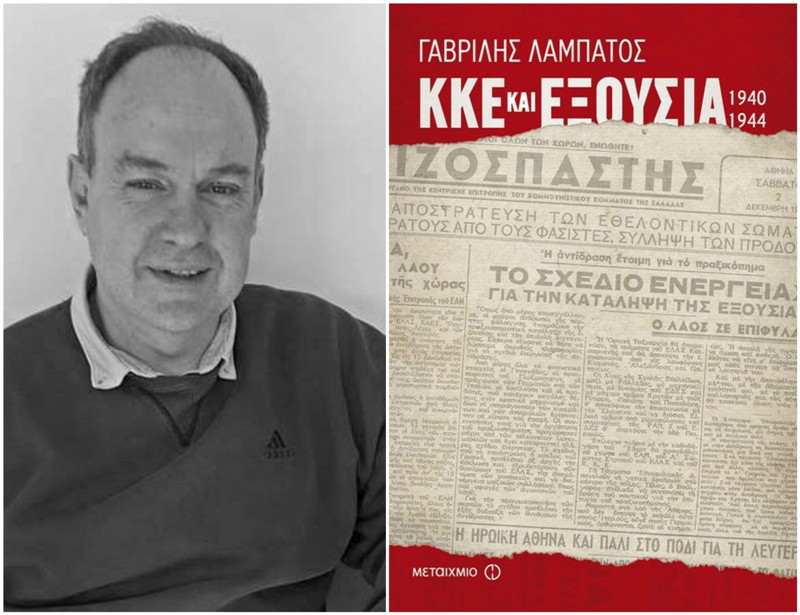 Gavrilis Lampatos has published a plethora of articles and studies on the history of the Greek Left and in particular of the Communist Party of Greece (KKE) in collective works, newspapers and magazines as well as in two monographs, "Greek political refugees in Tashkent 1949-1957" (Athens, 2001) and "KKE and power 1940-1944" (Athens, 2018).

In his latest book, "KKE and power" Lampatos explores the spectacular rise of the KKE in popularity and political clout between 1940 and 1944: in 1940, on the eve of the Greek-Italian war, the KKE was an organizationally ruined party, while the constant policy changes followed by the Communist International over Nazism confused Communists across Europe. Nevertheless, the KKE succeeded in regrouping; in 1944 it was a party of power able to transform almost radically the established political system.

Through unpublished personal testimonies and archival sources, the book examines how this change has been achieved- and the price that has been demanded in many cases. Gavrilis Lampatos spoke to Rethinking Greece and Grèce Hebdo* about his book, the role of the National Resistance during WWII and the spectacular rise of the KKE´s popularity between 1940-1944. He also discussed the decline of KKE's acceptance among the Greek people and the begining of the Greek Civil War, fought from 1946 to 1949 between the Greek government army and the Democratic Army of Greece (DSE, the military branch of the KKE). As for Greeks' exceptional interest in public history, Lampatos says that "there are many people who want to know about these traumatic events, to learn of their fathers' and grandparents’ history."

What reasons are there for a book today about the KKE during the occupation (1940-1944)? Why does this subject interest the Greek public? Are the 1940s not a decade overdone in terms of historical research?

Indeed, plenty of books dealing with the '40s have been published. What was missing however was a specialized detailed study focusing on the dominant political force of the 1940s, the KKE, and in this sense the book filled this gap. What is interesting is that thus far there’s been an very positive response from the public. 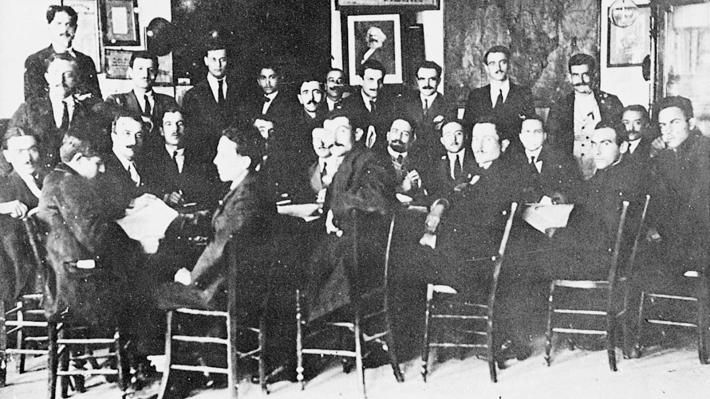 The members of the SEKE Founding Conference, October 1918

The KKE is the oldest Greek party. It was formed in 1918 under the name of the Socialist Labour Party of Greece (SEKE); it's a century-old. What were the economic and political conditions that allowed its establishment in 1918?

The establishment of the SEKE is linked to World War I and then Prime Minister Venizelos' efforts for Greece to have a socialist party that would take part in international conferences. It was for this reason that Venizelos was in favour of its establishment, and so within the framework of the economic and social crisis and the radicalization brought about by the Russian revolution, we also have the founding of the SEKE; which, in a matter of just a few years, evolved into a communist party. Of course its founders quite soon found themselves outside the party’s ranks, but that’s another story. The social strata that participated in KKE´s founding were labour strata, represented either by some unions in southern Greece or mainly by the Socialist Workers' Federation of Thessaloniki.

As regards KKE’s role in the National Resistance as well as more generally, what were the factors that led to the widening of its political influence in the war years?

In the course of the Occupation, the old political order broke down completely. The parties were uneasy, edgy and incapable of managing the reality of the occupation and the new needs of the population which came down to securing the basics for survival. The Communist Party, together with other smaller parties on the Left, formed the National Liberation Front (EAM), which, responding to the needs of the people in urban centres, as well as the power vacuum that existed in the mountainous areas of Greece, rapidly evolved into a huge political force. As we say in politics, when you have a tectonic earthquake new political subjects are being created. 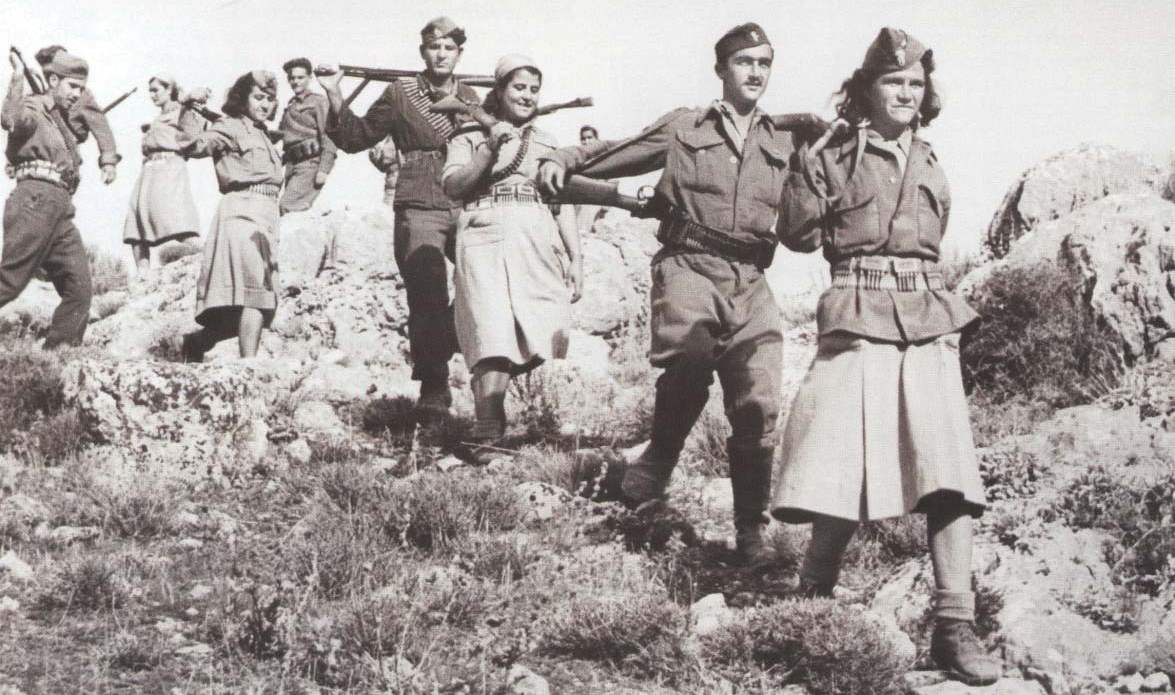 And what then? How did it lose its extensive political influence so quickly, after the 1944 December events (Dekemvriana)? And what were, generally speaking, the factors that led to the Civil War?

The excessive use of force alienated it from urban populations, while a part of the rural population manifested open hostility towards it following the defeat of ELAS (the Greek People's Liberation Army, i.e., the military wing of EAM) in the December events. These groups had not indicated their political standing in the past, but observed political developments so as to identify with whoever prevailed militarily. As for the civil war a year later, there are several factors that led to it, external and internal. There is an ongoing historiographical debate if there were social dynamics leading unavoidably to the civil war or whether it was linked to political choices. It was, after all, a political choice of the KKE leadership to attempt an armed takeover of power. The fact that Greece shared borders with socialist countries was an additional motivation at that time.

With regard to the conflicts, the First and Second World Wars in Greece lasted much longer: WWI  essentially ent on from 1912 to 1923, while WWII from 1940 to 1949, when the Civil War ended. How do you explain this?

This is a basic feature of Greek history in the century of extremes in that World War I and the schism it inflicted on Greek society was accompanied by the Asia Minor war, i.e. the conflict with Turkey. And it ended with a disaster: it wasn’t simply an end, it was a disaster. You had to start all over again from the beginning. The same applied to World War II, while disagreements and antagonisms that existed in both the interwar years and during the Occupation became much more extensive than in other countries, and that is why the conflict lasted till 1949. It is a basic feature of Greek history. There are social, political and cultural factors, all of them playing their part in this phenomenon; many political scientists, historians have written notable works on the subject. 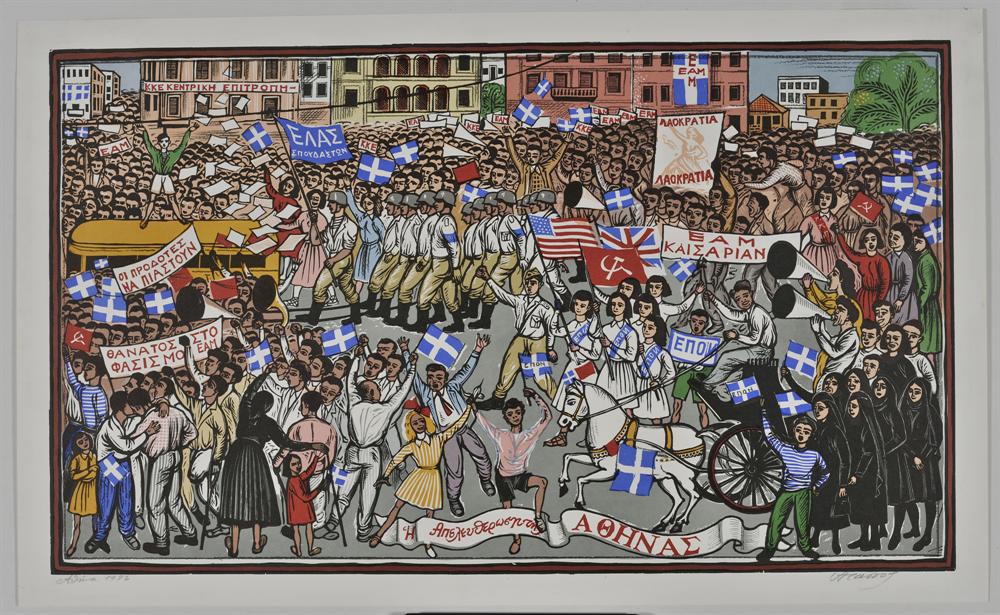 Tassos A., The Liberation of Athens (Color Woodcut, 1945)

Do you agree with what Mark Mazower has said, that historical events in Greece forecast political trends in Europe?

Mazower said this on the basis of the experience of the Greek War of Independence (1821 - 1829), which he sees as a European event; that is, the Greek Revolution of 1821 is one of the great revolutions of the 19th century. With this in mind, Mazower - an English historian with knowledge of the Greek language (which is a rare thing) as well as of all the contradictions of Greek society – is in a position to find analogies between the Greek case and that of other European states.

As regards the evolution of the Greek left, do you believe there is a distinctiveness about KKE?

When we talk of the Greek left, we actually mean many decades of its Communist movement. Because the left, from the European perspective, includes all the social-democratic parties as well that did not  exist in Greece up until 1974, if we accept that PASOK (Panhellenic Socialist Movement) is a kind of social-democratic party. The course of the Greek Communist Left, and especially the choice for civil war made by the General Secretary of the KKE Nikos Zachariades, probably served as an example to be avoided, for both the Italian and French communists. The Greek Communist Left did not turn out as an example to be followed.

The Communist Party of Greece, however, retains to the day a stable electoral base in contrast to other countries. Is there a future, in your opinion, for the KKE?

Here’s a historic paradox: the era of communism has ended, with many communist parties in Eastern Europe having transformed into social-democratic ones, while there are other parties labeled as communist, for example in Portugal, who place themselves at the left of social democracy. These communist parties seek to alter political correlations within the framework of the political game in their own countries. Our communist party however functions as a party of social protest, which is why all its stakes lay on a distant socialist future, following a rather lonesome path. We shall see what future there is for a party for which there is no corresponding international movement. 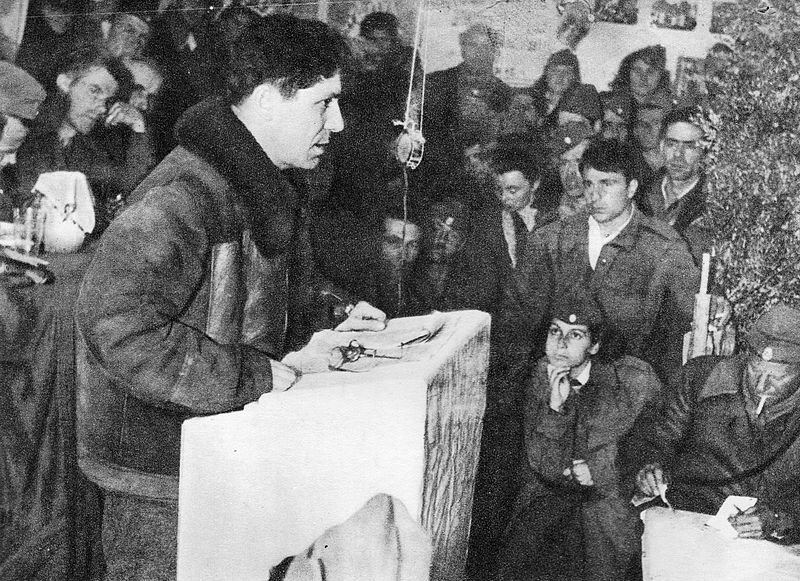 Do you think that, comparatively speaking, in our country today, on account perhaps of the crisis, there is increased interest in public history?

There is interest in history. What is interesting is that historical studies of academic standard do not circulate between academics only but are read by the wider public. This is a very interesting reality; the two books by professor of political science George Th. Mavrogordatos, “1915: The National Schism” (2015), and “After 1922: The Prolongation of the Schism” (2017), are very often displayed for sale by newspaper vendors; and they are academic studies, which only means there is a public that reads them. This is why publishers are interested in publishing such historical studies. What is more, there is a world that wants to know about these traumatic events for Greek society, to learn of their fathers' and grandparents’ history.

What do you think about Pantelis Voulgaris latest film “The Last Note” (2017), which deals with the execution of 200 communist prisoners in the final year of the Occupation?

I’ve seen the movie. Generally speaking, I have certain historical objections concerning Voulgari's films, but not in this case. It is essentially based on Themos Kornaros' book "Chaidari" (a suburb of Athens where a Nazi concentration camp operated during the Occupation), a book that was written in the heat of the moment, in 1945; and people, events and situations depicted are factual. Of course we could say that the execution itself is even more tragic than what we see on screen; the prisoners resist in any way possible in order to die a dignified death; they put up a fight for this. They negotiate dignity at the time of their death and this is extremely interesting.