Capital Link’s 17th Annual Greek Investor Forum took place at the Metropolitan Club in New York City on Monday (14.12), where leading Greek government officials and business representatives were able to update U.S. investors from major global investment banks as well as U.S and international organizations, on developments and reforms in the Greek economy and on opportunities ahead. 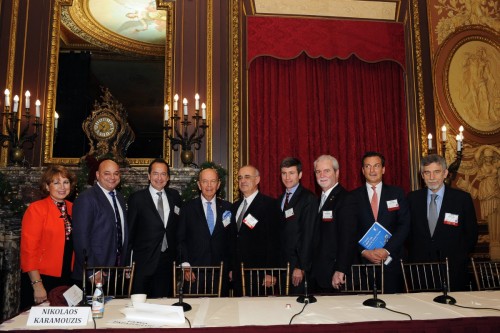 An array of leading personalities comprised the list of distinguished speakers, among which Greek PM Alexis Tsipras, who sent the Government's message to the international investor Community (via webcast); Economy, Development and Tourism Minister George Stathakis, who outlined (via webcast) the New Investment Landscape in Greece; Deputy FM Dimitris Mardas, who was the Luncheon Keynote Speaker, analyzing the International Economic Relations & Investments Landscape; and Elena Kountoura, Alternate Minister of Tourism who presented the main aspects of the Greek Tourism and Hospitality Sector. Other speakers included representatives from seven global investment banks and four Greek Banks, all European institutions, US investment companies, corporate CEOs from Greece and the United States, representatives from multinational companies, International Financial Institutions and Shipping Companies.

Prime Minister Alexis Tsipras addressed delegates with a televised message underlining that “the Greek Government has held tough negotiations, asking for real reforms that promote growth and do not shrink the economy’s potential”, emphasizing also the achievement of a “compromise agreement that, for the first time, entails lower fiscal (primary budget surplus) targets, more European investment resources and a clear commitment for debt relief." He also referred to what he called, “a series of radical reforms aimed at creating a stable and investment-friendly environment”, such as the tax reform law and the fight to combat tax evasion, as well as the bank recapitalization process, and said that the country’s GDP will return to positive growth rates. The PM also referred to Greece’s geostrategic position that makes it an energy and logistics transit hub and to the tourism industry.

Minister of Economy, Development and Tourism George Stathakis, presented via televised webcast the government roadmap for the return of the Greek economy to growth, outlining the basic milestones, mainly the Government’s agreement with international lenders that is being implemented through successive agreements, and the completion of the recapitalization of the banks that provides financial stability for the Greek banking sector. He also referred to the major initiatives in continuing the policies of opening up specific markets, professions, and facilitating the licensing process, which, together with Greece’s main economic advantage which is none else than its highly educated human capital, can lead the Greek economy next year in its return to growth. 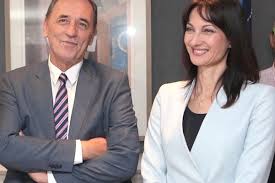 Alt. Minister of Economy, Development & Tourism Elena Kountoura addressed the Forum focusing on how the Tourism Sector in Greece has emerged as a key-factor for the economy’s return to growth, emphasizing on the results of the year 2015, which has been a record-breaking year. Greece was chosen by more than 25.5 million tourists worldwide, who spent directly more than 14.5 billion euros, reflecting an annual 5-7 % rate of growth in arrivals and receipts, rates which are higher than the global average. Kountoura also referred to the four-year strategy plan which reflects the Government’s vision to make Greece one of the top five most popular destinations in the world and underlined that in its latest country report, the World Travel & Tourism Council projects an annual growth of 4.7 % in tourism investments in Greece, for the next ten years.

Deputy FM for International Economic Relations, Dimitris Mardas, emphasized the stable political environment and set out the government’s new policies for attracting new foreign direct investments and promoting exports. He noted that Greece will need major investments in the coming years in order to achieve high growth rates and referred to government initiatives for creating a stable and favorable investment environment through streamlined bureaucracy and the simplification of licensing procedures for investments.

During the round-table discussion, top American Investors underlined the importance of continuing the implementation of reforms and of maintaining political stability in order to attract investors. At the same time, representatives of the European Central Bank, the European Commission, the European Stability Mechanism and the International Monetary Fund addressed the ongoing Greek bailout program at the Forum, with Declan Costello, the Commission’s Mission Chief in Greece, expressing his positive surprise in the lower than expected shrinking of the Greek economy in 2015 and the potential for growth in the second or third quarter of 2016. IMF Mission Chief to Greece, Delia Velculescu identified three major aspects, namely: the country’s weak public finances as Greece still has work to do to achieve its macroeconomic targets; the high volume of non-performing loans; and the need to increase business competitiveness, underlying the Fund’s constructive role in the negotiations between Greece and its international creditors. Ramus Ruffer, the ECB’s Mission Chief to Greece, pointed out that debt relief is something that each of the union’s member states will have to discuss, while Nicola Giammarioli, ESM mission chief to Greece, noted that Alexis Tsipras’s reelection in September following the agreement of the bailout shows that people of Greece have given him the mandate to implement the program.