About 14,000 lifejackets used and discarded by refugees and migrants after their arrival on the coast of Greek island of Lesvos covered Berlin’s Konzerthaus on Saturday 13 February, within the framework of an art project showcased by the famous Chinese artist Ai Weiwei. The bright orange vests were wrapped around the pillars of the Konzerthaus to highlight the plight of the hundreds of refugees trying to reach Europe every day by sea from Turkey. 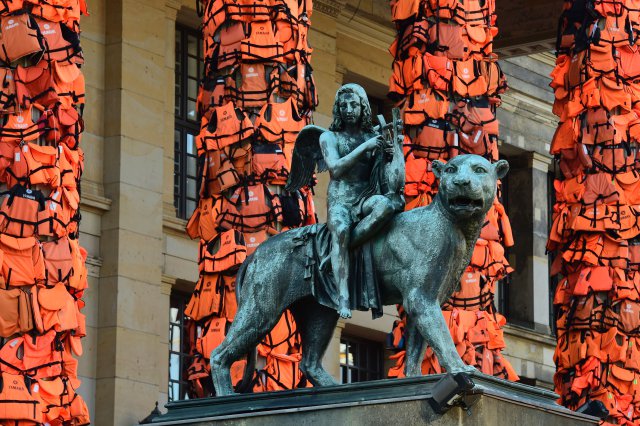 Tens of thousands of life vests remain strewn on the island's beaches and at a landfill near its north coast where most landings occur. The decision to give away the used lifejackets was taken by the island’s mayor, Spyros Galinos, who explained that the aim is to create a work that “will affect and mobilize the entire international community regarding the crime that takes place every day in the Aegean by unscrupulous traffickers”.

“The way I can protest is that I can withdraw my works from that country. It is very simple, very symbolic – I cannot co-exist, I cannot stand in front of these people and see these policies. It is a personal act, very simple; an artist trying not just to watch events but to act, and I made this decision spontaneously”, Ai Weiwei told Guardian

In 2015, over 1 million migrants arrived in Europe by sea routes. Since January, more than 400 have perished while trying to make treacherous sea crossings, according to the International Organization for Migration.

Ai Weiwei has taken an active interest in the plight of refugees and migrants who risk their lives by crossing the Aegean Sea in search of a better future in Europe. He has visited Lesvos several times documenting the perilous journey migrants undertake and set up a studio there to highlight plight of refugees. Last month he announced plans to create a memorial to the refugees on the island.

The artist has repeatedly praised the people of Lesvos for having a “very good understanding” of the refugees’ plight, their needs and for being “very helpful and very tolerant”, but emphasized they had limited resources to deal with the issue. He also recognized the impressive work of several foreign non-governmental organisations, notably in the Netherlands, Norway and Spain, and added that there was a lack of awareness of the situation in Europe and the rest of the world and a willingness to act. 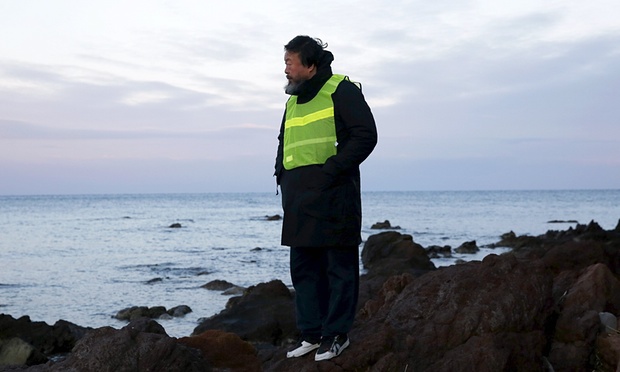 Ai WeiWei made headlines a few weeks ago when his image emerged posing as Alan Kurdi, the 3-year-old Syrian refugee toddler who drowned off a Turkish beach and since become the defining symbol of the plight of Syria’s refugees, prompting volunteer groups to flock to the Aegean islands to provide assistance. He also stirred interest when he announced his decision to close his Copenhagen "Ruptures" exhibition in protest at Denmark's controversial new law empowering authorities to seize valuables from asylum seekers.

“As an artist, I have to relate to humanity’s struggles ... I never separate these situations from my art,” he said. “The border is not in Lesbos, it really [is] in our minds and in our hearts”.