Lesvos sends a big welcome to the world!

Musicians, dancers, actors, writers and many artists from all over the world have begun gathering on the island of Lesvos to participate in a unique festival that officially kicked off yesterday and will run until August 26. The Symbiosis (from the Greek word that means Coexistence) Lesvos Arts Festival proudly welcomes people from all over the world that wish to use their art as means to express themselves in an open dialogue that will inform and promote ideas to address the pressing issues of the refugee crisis. At the same time, through its numerous events and activities, the Festival aims to attract interest to the island of Lesvos and to highlight its cultural heritage and endless beauties.

The idea behind this Festival was generated when 3 Greeks from Thessaloniki met a Palestinian and then a local from Lesvos.  Hussein from Palestine arrived last January in Lesvos to work as a cultural mediator for Doctors Without Borders. Struck by its beauty and its people, while working to support the refugee communities, he soon became involved with the locals and realized that they too deserve to be recognized for their amazing acts of selflessness and solidarity! Rita had a history of love for Lesvos. She had visited the island many times before deciding to move there. She quickly became an active member of the local community and started a youth acting group, mounting a number of shows with local students.  Hussein met Rita and began working on the idea of a festival. Meanwhile Lida, who was living in London, had been working on the idea of an arts festival in Lesvos for a few months. Through local volunteer groups she got in touch with Hussein and Rita, and after a while the two festivals merged activities and this is how SYMBIOSIS came about. With the contribution of Eri, who had fled Thessaloniki to move to Lesvos and actively became involved in the project, and Mersa, who knew the local art scene inside-out, they were able to bring the Festival to life. 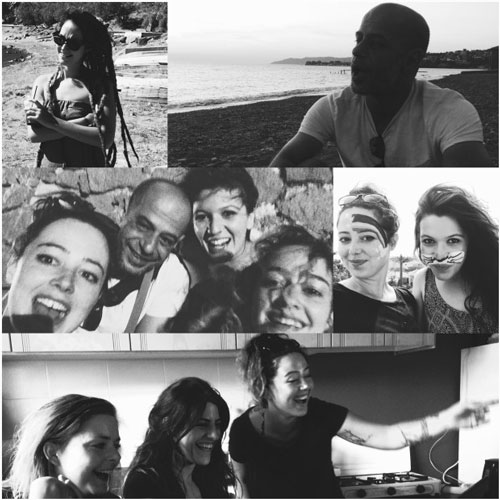 Admission to the Festival is free of charge and the event is divided into three thematic parts taking place in the city of Mytilini and the villages Eressos and Molyvos.  Musicians from different corners of the world, including Dutch-American, alt-pop, piano-driver singer and songwriter, Laura Jansen, Egyptian Ramy Essam, Turkish Olcay Bayir, Italian Gianni Denitto and a number of Greek ​musicians will be performing. The programme also includes artistic and theatrical performances with a number of theatre groups performing classic or more experimental pieces, as well as a unique, in its character, theatre group from Sweden, the Mosaic Theatre, comprised of people with mental health or learning disabilities. A core part of Symbiosis Festival is the everyday workshops (both within and outside refugee camps), panel discussions, a food festival and a film festival. The organizers have also teamed-up with London-based organisationLon-art, who are committed to designing and delivering workshops that aim to discuss social issues and bring social change. The team of Lon-art will be delivering a mix of creative and educational workshops, both for the festival-goers and the people in the refugee camps.

The organization of the event is under the hospices of the Municipality of Lesvos with the support of local communities and agencies, as well as independent contributors. With the hope that the festival will promote all aspects of the refugee issue but also the local community of Lesvos, the organizers invite all people to contribute, by volunteering as performers, assistants or even co-organizers. People are also encouraged to donate to the crowdfunding campaign of the festival and spread the word through social and traditional media