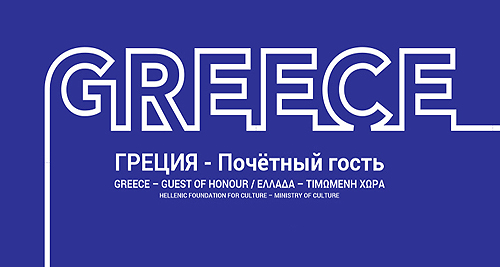 Visitors of the Greek stand will have the opportunity to get acquainted with aspects of Greek culture, there will be displayed a selection of around 600 publications from 50 publishing houses, representative of the rich literary, scientific and artistic production of Greece spanning from antiquity, the Byzantine era, the Enlightenment, the 20th century until today.

Important Greek writers and artists are currently in Moscow in order to participate in the events’ programme that includes 30 events aiming at introducing the modern cultural face of a small country with a great history that maintains deep historical and cultural ties with Russia, through literature, cinema, visual arts, music.

The events’ program was developed by the Hellenic Foundation for Culture with the collaboration and support of Cavafy Archive-Onassis Foundation, State Museum of Contemporary Art, Greek Film Archive, Greek Film Center, Michael Cacoyannis Foundation, ASIFA HELLAS – Greekanimation.com, Greek IBBY-The Circle of the Greek Children’s Book and the Embassy of Greece to the Russian Federation, as well as the Department of Byzantine and Modern Greek Studies of the Lomonosov Moscow State University.

After the official opening of the Greek stand on Wednesday 7/9 at 12:30a discussion will follow, at 14:00, on the subject “Why Greece: Policies, institutions, challenges”. Speakers include: Professor Aristedes Baltas, Minister of Culture and Sports of the Hellenic Republic, Professor Konstantinos Tsoukalas, President of the Hellenic Foundation for Culture, Professor Kostas Gavroglou, President of the Parliamentary Committee on Education. Dimitris Papanikolaou, Associate professor in Modern Greek and Fellow of St. Cross College, University of Oxford will be coordinating the discussion, while the Ambassador of Greece to the Russian Federation, Andreas Friganas, will also address the audience.

Sokratis Kampouropoulos, book expert, book policy working group of the Ministry of Culture and Sports, will make a presentation of the Greek book market at the international book forum organized by the Russians.