The first photograph of the Acropolis and its history

Athens, 1842. The Acropolis stands over the city and inspires Joseph-Philibert Girault de Prangey (1804-1892), the man who took the oldest existing photograph of the monument. The photograph was taken on a morning from the Hill of the Nymphs. 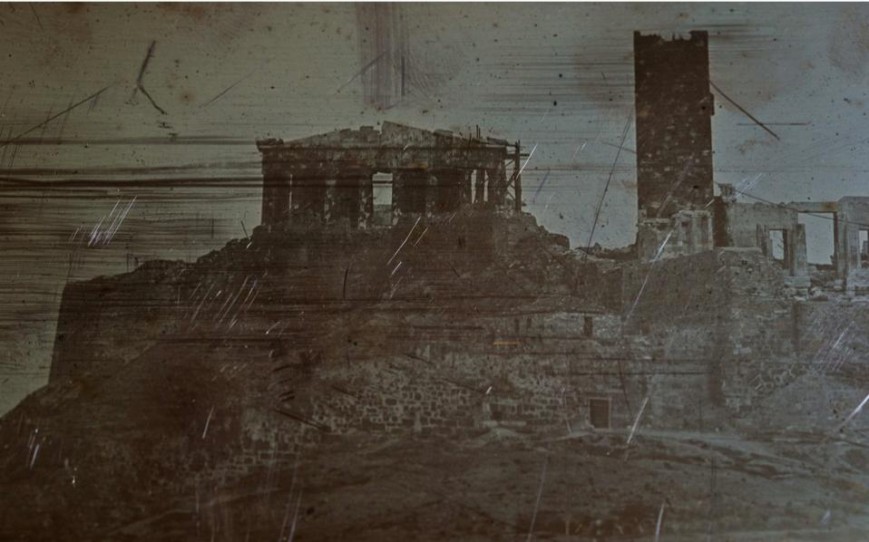 The photograph that is considered the oldest existing photograph of the Acropolis, 1842, by Joseph-Philibert Girault de Prangey (1804-1892).

Athens and the Acropolis at the time of the photograph

Athens, which had been the capital of the Greek State since 1834 (a country with a population of 850.246 in 1840) was a small city at the time and had been almost entirely destroyed in the course of the Greek War of Independence (1821-1829), during which both the city and the Acropolis had suffered multiple sieges.

The city underwent serious damages, especially during the siege by Reşid Mehmed Pasha (also known as Kütahı), which lasted eleven months, from June 1826 to May 1827. After retaking the city in 1827, the Ottoman forces kept it until their withdrawal on 31 March 1831, when the Acropolis was officially handed back to the Greek State.

Regarding the Parthenon, it should be noted that a few years prior Girault de Prangey’s visit, Thomas Bruce (also known as Lord Elgin), British ambassador to Istanbul, had between 1801 and 1815 removed 12 pediment statues, 156 frieze plaques, 13 metopes, as well as the frieze of the Temple of Athena and one Caryatid of the Erechtheion (which was later replaced by a plaster copy).

View of the Acropolis and the Anafiotika neighbourhood, 1842, by Joseph-Philibert Girault de Prangey (1804-1892).

The history of the first photograph of the Acropolis starts early 1842, when 38 year-old artist and scholar Joseph-Philibert Girault de Prangey began his “grand tour” of Palestine, Egypt, Syria, Italy, Turkey and Greece, using a daguerreotype camera in his travels. Before this trip, he had already written two books on the Arab and Moorish monuments of Sicily and Spain. Horace Vernet, Frédéric Goupil-Fesquet and Gaspard-Pierre-Gustave Joly had undertaken similar travels before him, but none of their daguerreotypes were saved.

Girault de Prangey first arrived in Marseilles and Rome, and then travelled to Greece, Cairo, Alexandria, Istanbul, before reaching the archaeological sites of Asia Minor, “straying as far away as possible from the roads commonly used”. He continued his three-year long trek by visiting the Holy land, Baalbek, Damascus, and Aleppo.

His daguerreotypes are the oldest existing photographs of Greece, Palestine, Egypt, Syria and Turkey. Surprisingly, his work was discovered in the 1920s in a storage building of his estate and was made public only 80 years later. 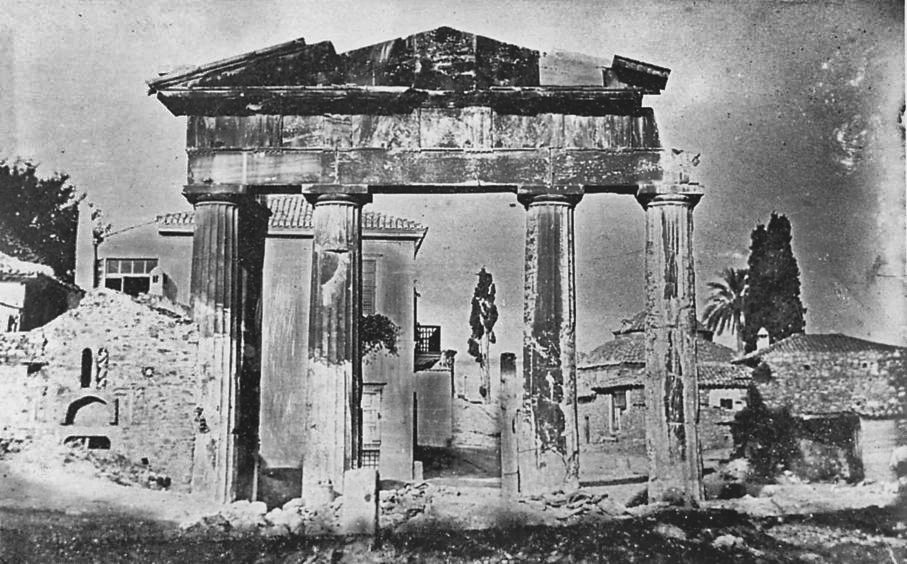 The birth of the photograph coincides with the rite of the “grand tour”, a type of voyage by Westerners in search of knowledge and exoticism, comprising travels to Italy, but also later to the so-called Orient. The “grand tour” (for a history of the term see Towner 1985) was an aesthetic experience that marked many generations of painters and scholars - British and French alike (Bustarret 1993).

19th century Orientalism was inextricably linked with photography in France: following the invention of the fixed image process by Niépce (1765-1833) and Daguerre (1787-1851), François Arago (1786-1853) would recommend at the outset the use of photography for the needs of Egyptology (Millet 2003). 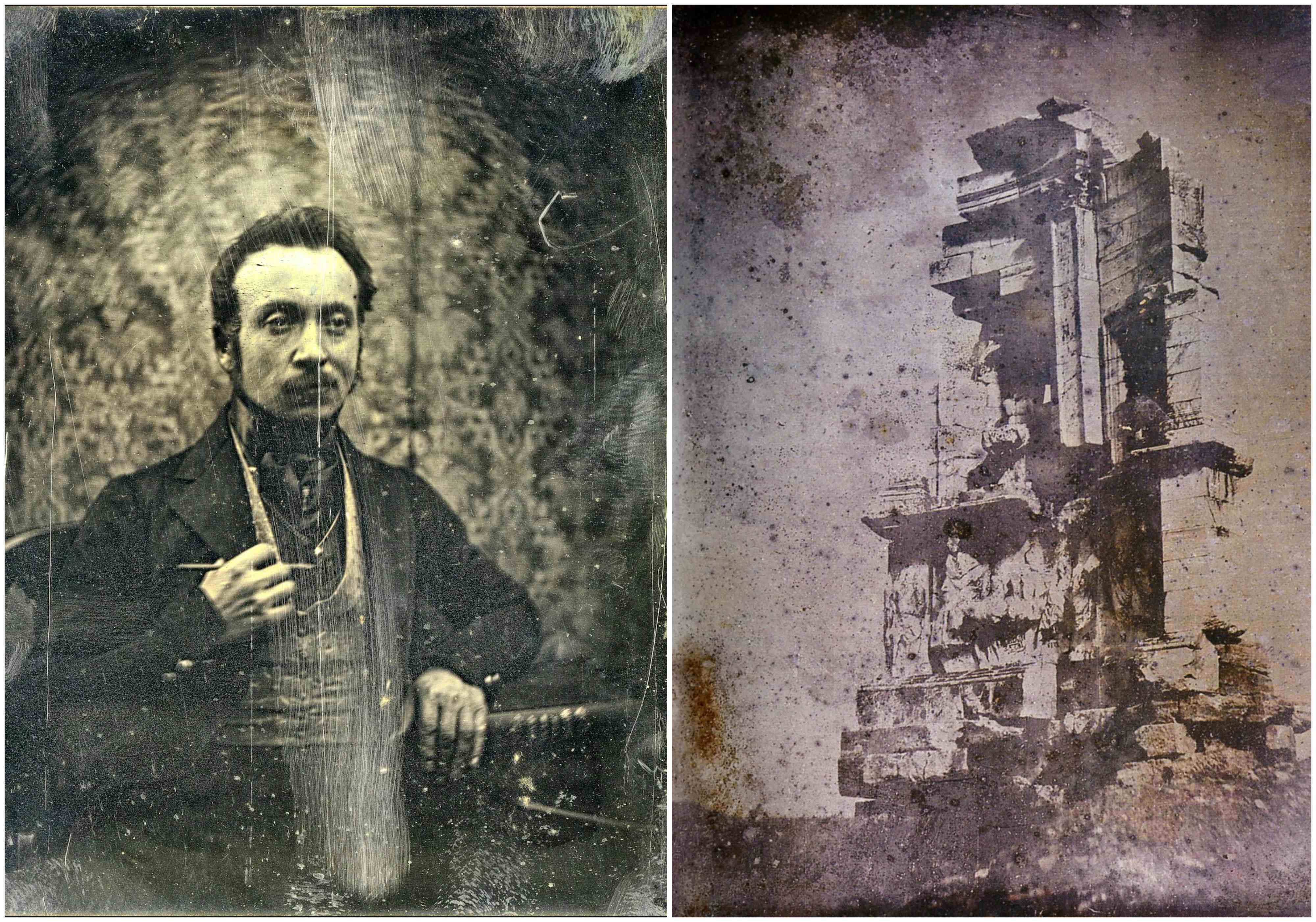 Joseph-Philibert Girault de Prangey: an unsung pioneer of the daguerreotype

Joseph-Philibert Girault de Prangey (1804-1892), heir to a great fortune, dedicated his life to traveling, botany, drawing, architecture, and an invention that won his heart right away: photography. His 1842 shot of the Temple of Olympian Zeus in Athens, with a dark sky looming over its ruins, was considered bold by experts.

The numerous daguerreotypes he brought back from his voyage to the Orient (1842-45) (more than 800 plaques, non reproducible, extremely fragile) constitute visual documents of exceptional importance, since they allow us to discover the earlier form of many sites that were later transformed or even destroyed.

For Girault de Prangey, the daguerreotype was just a tool at the service of his drawings, since he never considered photography as having any value other than helping in the precision of his renderings. In his mind, it was just a simple note-keeping device, as this was also the case for many other travelers at the time.

His only known self-portrait depicts the artist, who was trained at the Beaux-Arts School in Paris, standing in front of the camera with pencil in hand, as for him art in the very end could not be mediated through an automated depiction by a machine. However, he will remain in history for his unique photographs and in particular the first photograph of the Acropolis.

By Magdalini Varoucha. Translated from French to English by Dimitris Gkintidis.