Argolis (Greek Argolída), is one of the regional units of Greece, situated in the eastern part of the Peloponnese peninsula. It is safe to say that no visit to Greece is complete without a trip to Corinth and Argolis, places that have been known since the dawn of history.

The Ephorate of Antiquities of Argolida, a regional service of the Ministry of Culture based in the town of Nafplion, is making a tremendous effort to protect and display the antiquities which are found within its area of competence.

Nafplion, the first capital of Greece after the war of independence, with its exquisite Old Town, stunning seafront, narrow paved streets and beautiful collection of Venetian houses and elegant mansions, is one of the most beautiful towns in Greece. Its three fortresses of Palamidi, Akronafplia and the Bourtzi stand as the main symbols of the town’s ancient and medieval past.

Besides the famous archeological sites of Myceneae and Epidavros, the visitor to Argolis may visit the amazing castles in the region, all very well preserved: 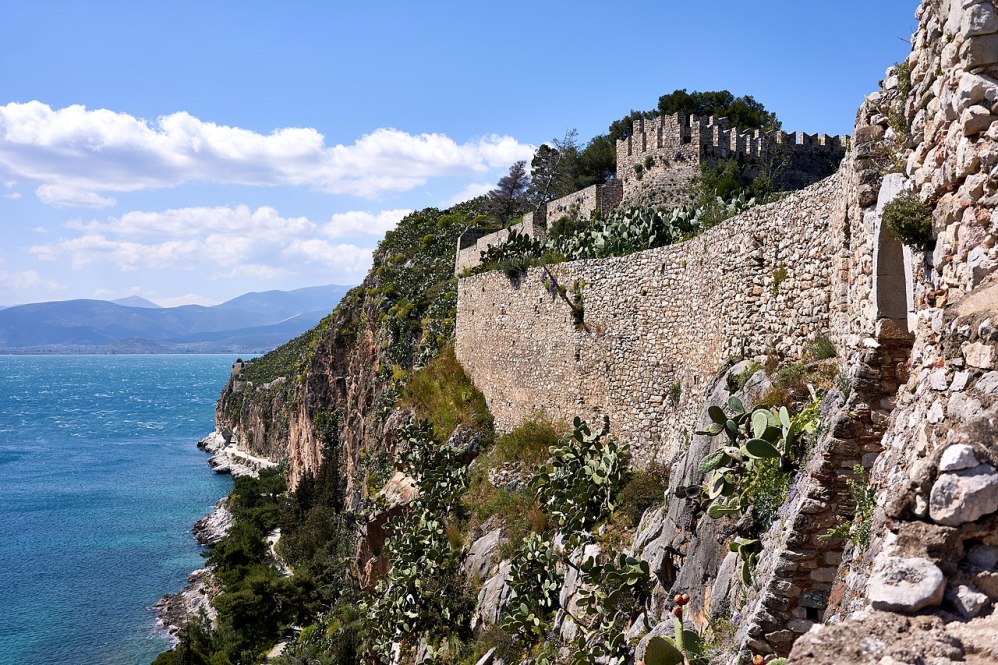 The walls of Nafplio's oldest castle, the Acronafplia, bear witness to its rich history and long uninterrupted inhabitation. The current state of the castle, although quite changed by modern intervention, was basically crystallized duringthe Frankish and first Venetian occupations, from the 13th to 16th centuries.

According to archeologists, there is evidence of the presence of the first organized settlement at Akronafplia at least since the end of the 4th century BC, which is the date of the first phase of its fortification using polygonal hewn stones.

The castle’ s architectural elements and finds such as coins point to its Paleo-Christian and Byzantine past. The eastern fortifications and the two chapels inside the castle also date from the Mid-Byzantine period.

The castle-state, during this period, was under the rule of the De la Roches, the De Briennes and the D'Enghiens. Following the seizure of the castle by the crusading knight, Villehardouin, Akronafplia was divided into two sections by a partition wall. The Frankish occupation came to an end in 1389, when—faced with the Ottoman threat and under pressure from Nerio Acciaiuoli, the Florentine lord of Corinth—Maria d'Enghien surrendered Nafplio to the Venetians.

Following the fall of Argos (1463) and Chalkis (1470) to the Ottomans, the Venetians sent Vittore Pasqualigo as governor, accompanied by Antonio Gambello, the architect. They carried out a series of fortification and infrastructure projects, which changed the appearance of Akronafplia. The city extended towards the north, at the expense of the sea, as, with the creation of artificial banks and the use of wooden posts as foundations, the lower city was created.

This was reinforced from the seaward side with walls and, on the landward side, the Porta di Terraferma [the land gate] was built. The administrative centre was moved to the lower city. The entrance to the harbor was also made more secure, with the fortification of the small island, the Bourtzi. 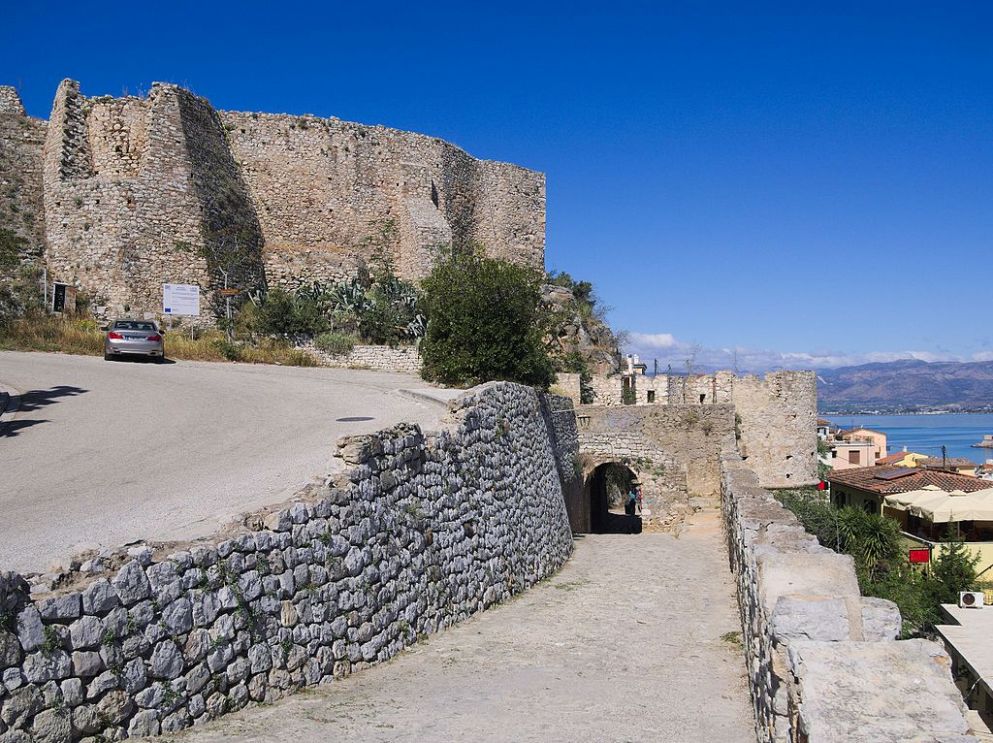 Nafplio was the base of the Ottoman administration of the Peloponnese. A monument of the time is the mosque, which today houses the 'Trianon' Theatre. A Turkish traveler, who visited the city in 1668, wrote that there were many houses within the Castle of Akronafplia, and a large mosque on the top of the hill, the Fethiye, which was originally a Christian church dedicated to Saint Andreas.

This period, although rather brief, was of lasting importance for the city. Nafplio became the capital of the Kingdom of Morea (Regno di Morea) and the Venetians hastily proceeded with the fortification of the rock of the Palamidi, building the defensive complex that we can see today. The fortification of the Palamidi resulted in the downgrading of the Castle of Akronafplia, which, in 1686, by order of the Venetians, was designated for the exclusive use of the military. The eastern section of the Castle of Akronafplia, along with the Land Gate in the lower city were reinforced with the creation of a new bastion, which was given the name of the governor general of the Peloponnese, Grimani (1706).

The fall of Palamidi to Kolokotronis' army in 1822 freed the city from the Ottomans. It was declared the first capital of the newly formed Greek Sate in 1827. In 1828, Ioannis Kapodistrias disembarked in Nafplio, as the first governor of Greece. The Grimani Barracks in the Castle of Akronafplia, which were in a state of ruin, were rebuilt and became known as the Kapodistrias Barracks, and later became a prison. At the same time, the fortifications of Akronafplia were cleared of the piles of rubble. The scattered hovels were renovated to house the guard and, at the same time, the first military hospital was built next to the east wall, as was the chapel to the Agioi Anargyroi. During the post war years, 1950-1975, the Castle of Acronafplia became a centre of intensive touristic development. 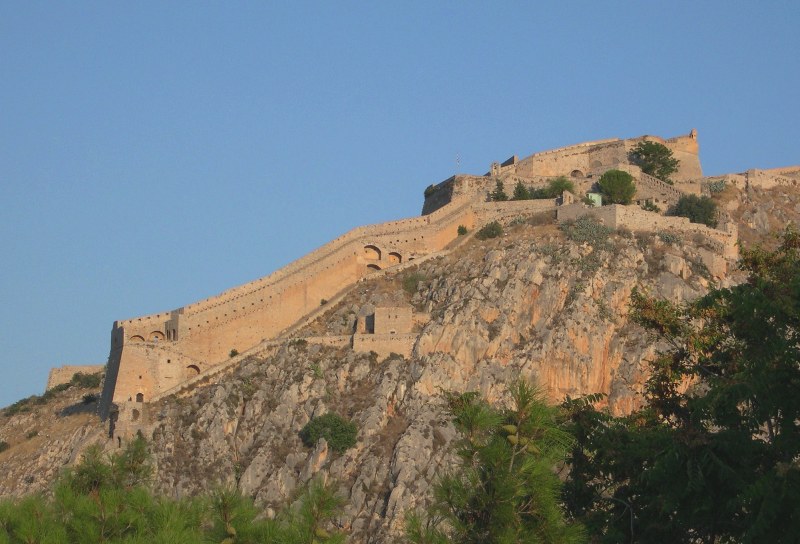 As mentioned above, the Palamidi hill was fortified for the first time by the Venetians during the 2nd Venetian occupation (1686-1715). It is a perfect system of synchronized fortifications. The Palamidi is a classic Baroque fort, built to plans by Giaxich and Lasalle. In 1715 it was conquered by the Ottomans who held it until 1822, when it was transferred to the newly formed independent Greek State.

One of the most important architectural examples of defensive architecture in the country, the castle, with its eight bastions, is a Venetian fortification constructed by the rulers of the 18th century. A long series of steps, fortified with small battlements, leads up to the northwest side of the fort. 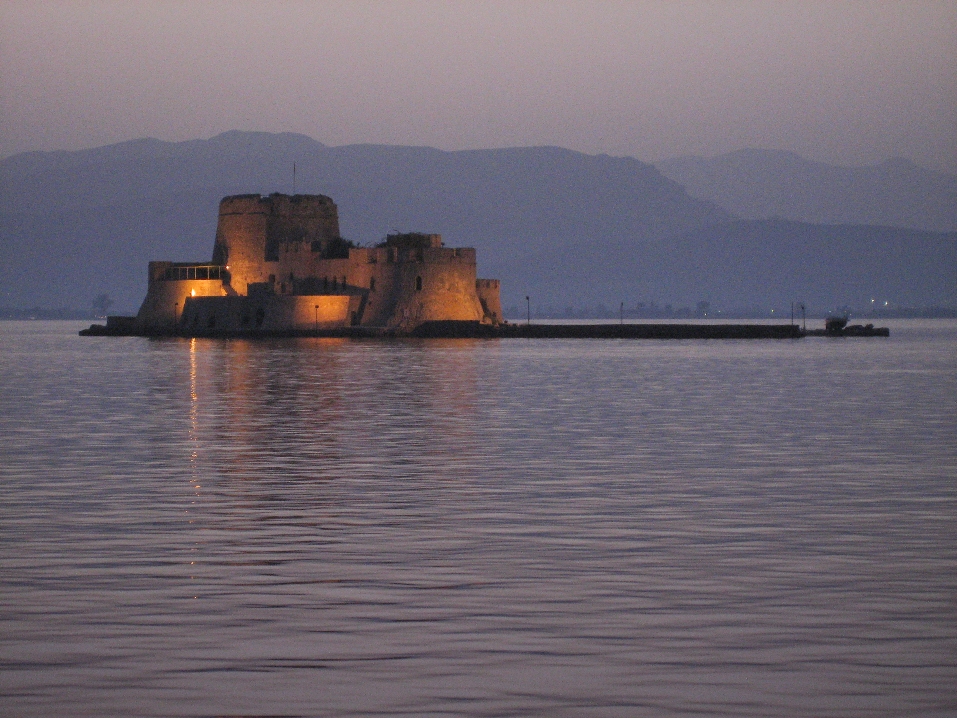 The Venetian castle of Bourtzi standing on the rocky islet of Agioi Theodoroi is probably the most photographed spot of Nafplion. During the First Venetian Occupation it was connected to Acronafplia through a huge metal chain that secured the port against enemy ship attacks. The Greeks regained it from the Ottomans on June 18, 1822, and until 1865 it served as a fortress. It was then transformed into residence of the executioners of convicts from the castle of Palamidi. Nowadays it is a tourist site, occasionally hosting Summer Music Festivals.

Towering over the modern town of Argos is the medieval Castle of Larissa, at an elevation of 289 m (948 ft). The history of the fortifications on Larissa Hill begins in prehistoric times and continues to the Greek Revolution of 1821. According to the author of the book “Encyclopedia of Ancient Greek” Gay Wilson, the name Larissa is pre- Greek and means “citadel”.

Traces of the Mycenaean fortifications (13th century BC) have survived in the castle's citadel, and some of the bulky, monolithic architectural elements were reused in later medieval defenses. It was from the start a fortified observation post and the last line of defense for the town of Argos.

Although the site was in continuous use from prehistoric times until WWII, it took its current form in the Middle Ages. The ancient walls were the main guide used when laying out the medieval fortifications. The fort is made up of the citadel at the top and a curtain wall. The walls are re-enforced by towers, which, as a rule, are triangular or quadrilateral. Later, from the 15th century, with the arrival of guns, the castle underwent extensive construction work and was reinforced with cylindrical towers.

The headquarters and military installations were most likely inside the citadel. A first millennium church has been found there. In 1174, a smaller church, dedicated to the Virgin Mary, was built on the same site. There were large cisterns in both the castle's enclosures. It kept this form until the end of the 14th century and with a few Byzantine and Frankish reinforcements and alterations, Larissa was one of the four most powerful castles in the Peloponnese, according to the Chronicle of Morea. During the 15th century, there was extensive reinforcement of the fortifications as a consequence of the castle constantly changing hands between the Venetians and the Ottomans, as well as the developments in defensive architecture brought about by the arrival of guns.

The monument's adventures would continue during the time of the Greek revolution, and battles were fought there. At the beginning of the 20th century, Wilhelm Vollgraff began his excavations, which mostly focused on uncovering the interior.