Archaeology in Crete: Lectures at the Museum of Cycladic Art

The Museum of Cycladic Art has announced a new series of lectures on archaeology, focusing on the island of Crete; the cycle will feature announcements of recent discoveries and new archaeological finds, as well as research projects, and will take place from December 2019 until December 2020. Admission is free for everyone.

The lecture cycle forms part of a programme of archaeological lectures hosted by the Museum over in recent years, open to both the scientific community and the general public, with no entrance fee. Since 2013, archaeologists from the Ephorates of Antiquities of Attica, Boeotia, Euboea and Phocis, have had the opportunity to present the work and finds of the regional services of the Hellenic Ministry of Culture and Sports in their respective areas of competence, including excavations, conservation, restoration, protection and exhibition of antiquities.

The new cycle focuses on the extensive excavations and other research activities conducted on the island of Crete by the Ephorates (regional services) of the Greek Ministry of Culture, by foreign archeological schools or by the University of Crete. The theme of the lectures was influenced by the successful completion of the archaeological exhibition "Crete. Emerging cities: Aptera-Eleutherna-Knossos", hosted by the Museum in the 2018-2019 season, featuring about 500 exhibits from both old and recent excavations in Crete, most of which had never been presented to the public before.

All papers presented at the lectures are later published by the Museum of Cycladic Art, in the print series "Archaeological Contributions". The papers of the 2019-2020 lecture cycle will be published in this series under the general title "CRETE". 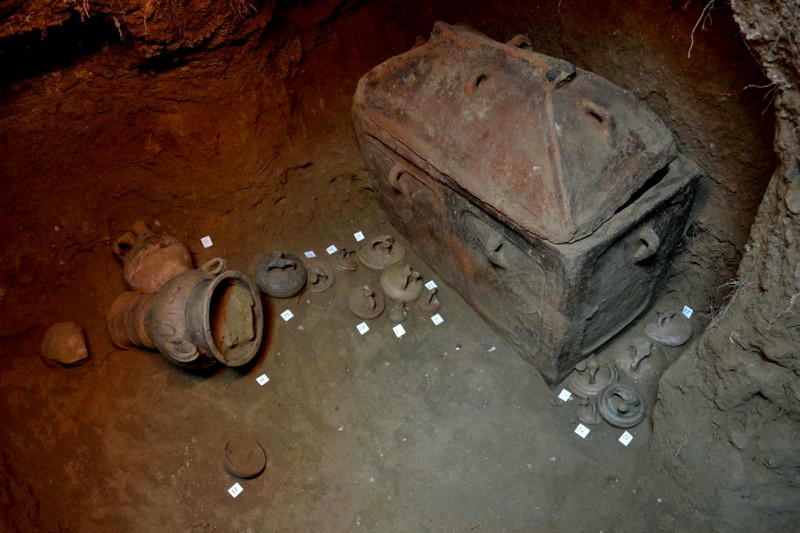 2 December 2019: "An unplundered Late Minoan IIIA-B chamber tomb at Kentri village near Ierapetra", by Chryssa Sofianou. In August 2018, a carved chamber tomb with three niches was excavated in an olive grove near the village of Kentri in Ierapetra. The tomb was unplundered and all the grave gifts were found in the place where the relatives of the dead had placed them. A chest-shaped larnax with lid as well as thirteen stirrup jars were discovered in the southwestern niche, while a bathtub-shaped larnax, six stirrup jars, two miniature vases and one jar were unearthed in the north niche. The second larnax bears decorations depicting human figures and a horse with a chariot. Chrysa Sofianou, director of the Archaeological Service of East Crete (Lassithi), will present the nature and significance of the finds in detail.

9 December 2019: "In the Shadow of the Minotaur – Recent Excavations at Sissi (Lasithi, Crete)", by Professor Jan Driessen. Driessen is director of the Belgian School at Athens, professor of Greek archaeology at the UCL and head of the Sissi Archaeological Project. His presentation will focus on the project which comprised two consecutive five-year programmes of excavations, research and study carried out since 2007 in the location of Sissi in Crete, conducted by the Université Catholique de Louvain, under the auspices of the Belgian School of Athens. The principal aim of the project is a detailed exploration of the settlement and cemetery in Sissi, in order to compare it with that of nearby Malia, providing an interesting test case to compare intra-regional material culture and explore various forms of dependency through time and the implementation of emerging social and economic links.

16 December 2019: "Rock Art and Round Buildings in Eastern Crete: the Case of Final Neolithic Sopata and Early Minoan Mesorachi " by Professor Jan Driessen, Chryssa Sofianou, Thomas Brogan, Melissa Eaby, Yiannis Papadatos. The talk is an overview of recent fieldwork at Sopata and Mesorachi between 2013 and 2016. Geographically this region forms a natural boundary between the Mirabello and Siteia Bays. In 2012 a survey of the plateau identified 11 sites. Of these, eight belonged to the Late Final Neolithic and Early Minoan I periods, including two Late Final Neolithic settlements on the western plateau of Sopata. At the beginning of the Bronze Age these sites were abandoned, and several new sites were built on the more protected Mesorachi ridge to the east. Excavations at four of these sites have revealed a valuable dataset for this poorly understood period of Cretan history, highlighted by use of rock art and round architecture.