Long before the days of television, radio, or even cinema, there was a different form of entertainment in Greece derived from folkloric traditions. Known as Shadow Theatre, or the so-called "Karagiozis" art (named after the main character of Modern Greek shadow theatre - thus becoming a synonym of the theatre it belongs to), it includes paper-made puppets handled by a puppeteer who stands behind a white screen that is illuminated by some source of light and devises his own original tales. One of the most prominent artists that kept the Greek shadow puppet tradition alive was Eugenios Spatharis (1924-2009), whose 11th death anniversary is marked tomorrow, May 9, 2020. 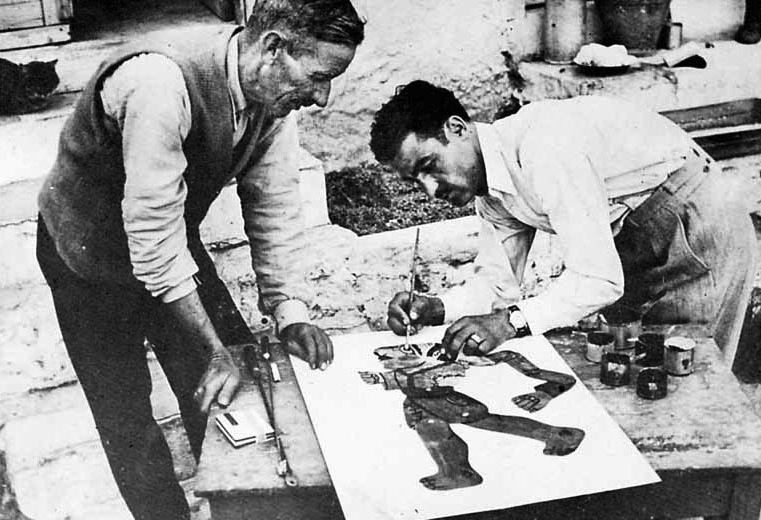 The son of Sotiris Spatharis, himself a pioneer in this field and a founding member of the Pan-Hellenic Association of Shadow Players, Eugenios Spatharis was progressively introduced to his father's art, despite his father's early wishes that he become an architect. However, due to the hardships brought on by the German occupation in Greece, Eugenios devoted himself to his father’s art. In fact, the Spatharis family case confirms the saying about “the student becoming the master”: in 2007, the Greek Ministry of Culture awarded Eugenios Spatharis the title of "Grand Master" in recognition of his contribution to the art.

“I want you to promise me that you will never abandon the art I taught you!
You must always remember that Karagiozis and the other heroes, whatever they do, they will always be your true and best friends "

A man of many talents, Eugenios Spatharis began his career painting the posters and sign-boards advertising his father's shows. Later on, he used this talent for decorating stage costumes and settings. His long experience gave him the opportunity to be recognized as a professional painter and to become a member of the Chamber of Fine Arts in Greece; more specifically, as a "naive" painter, he adhered to clear figure lines and simplicity of design.

As a shadow player, Eugenios Spatharis began staging his one-man shows in Maroussi and several other neighborhoods of Athens in 1942. A few years later, he started traveling all over the Greek countryside, performing many shows featuring Karagiozis, either in shadow puppet shows or with real actors at the National Theatre of Northern Greece, the Hellenic Chorodrama, the Hatzokos Theatre in Thessaloniki, the Syntehnia Theatre and many more with his plays, such as “The journey” by G. Themelis (1965), “Karagiozis the Dictator” by G. Giannakopoulos (1969), “Our Great Circus” by I. Kabanellis (1972), and many more.

He also traveled abroad (New York, Brussels, Paris, Geneva, and London among other cities) to take part in international festivals and conferences on the art of Shadow Theatre. Among other distinctions, Eugenios Spatharis – who was a member of the UNESCO International Theatre Institute – was awarded the prestigious Rome Prize in 1962 and the Toscanini medal in 1978. In 1980, a World Festival of the Shadow Theatre was organized in his honor in Paris, while he also set up a school of shadow theatre in Denmark, which his pupils are still operating today.

In 1966, the first Greek TV Channel (ERT1) began its broadcasts with a Karagiozis show by Eugenios Spatharis and these programs continued until 1992. He also appeared in many feature films as well as TV commercials and collaborated with prominent Greek composers such as Xarchakos and Fotiadis by providing the voice for Karagiozis in the recordings. Last but not least, in 1991, Spartharis founded the Spathario Shadow Theatre Museum in Athens, showcasing the history and evolution of this traditional popular art form from 1860 to the present; however, to quote Eugenios Spatharis, the aim of the museum "is not to show a lifeless exhibition of shadows... on the contrary, the intention is to keep them alive in a permanent hospitable home in which both young and old visitors will be accepted to amuse themselves and leave satisfied”.

The Greek shadow theatre in the 21st century

The history of Shadow Theatre goes back centuries and is still active today even though there are only a handful of puppet masters left worldwide. Greece adopted the shadow puppet theatre with gusto and created a form all its own; thus, it became an inextricable part of Greek culture and a vital way for Greeks to see, hear and maintain their cultural and artistic traditions, with the character of Karagiozis representing the virtues and vices of the average Greek.

The “Karagiozis” shows were very popular throughout Greece right up to the early 1980s. The shadow theatre was improvisational and the people’s reactions to each performance were decisive for the development of the play. Nowadays, shadow theatre does not fill the public spaces of Athenian neighborhoods like it used to. In fact, contemporary puppet players of Karagiozis shadow theatre may have a smaller share of the audience (children mainly) compared to a few decades ago, but they remain loyal to the art. They still make their puppets themselves, as their predecessors always did, they perform in the traditional way but they also enhance their theatre with contemporary themes (such the “Astronaut Karagiozis”) or means (like the combination of shadow puppetry and video art).

Perhaps shadow theatre is so embedded in Greek culture as a form of expression that even if it is outmoded as a spectacle it shall not become extinct but will find a way to be preserved through a child’s ability to laugh along with the genuinely simplest things in life.

In one Karagiozis story, where the hero was on trial for some reason, the judge asked him which was the mother tongue he better understood, for Karagiozis to reply:

While Karagiozis’ language is old, it isn’t obsolete. And what he does best nowadays is to provide an alternative source of societal commentary and joy.