The exhibition Treasures of Philhellenic Painting, featuring works from the philhellenic art collection of the Anthony E. Comninos Foundation, is hosted at the Benaki Museum of Greek Culture. It showcases paintings by a number of acclaimed 19th-century painters from Europe, including Greece, which draw their subjects from Hellenic themes – historical events, landscapes and scenes of everyday life.

The exhibition concludes Benaki Museum’s series of thematic events for the bicentenary of the Greek War of Independence; curated by art historian Dr. Fani-Maria Tsigkakou, it will run until 9 January 2022, presenting many significant works that have never before been accessible to the public.

It features around 30 works by painters from Italy, such as Filippo Agricola and Cesare Dell Acqua, Germany, such as Peter H.L. von Hess, Johann G.C. Perlberg and Carl A.J. Rottmann, France, such as Antoine-Alphonse Montfort and Pierre Bonirote, Great Britain, such as Charles Eastlake, Henry Nelson O'Neil and George Philip Reinagle, Denmark, such as Martinus Rørbye, and many others; Greek painters are however also featured, including Theodoros Vryzakis, one of the most important representatives of the so-called Greek "Munich School" of art.

The curator has divided the exhibition into three thematic sections; the first one is dedicated to landscape painting, with the depicted scenes often being partially embellished according to classicist and romantic ideals. It includes works by artists such as the Scottish landscape painter Hugh W. Williams, known as "Grecian Williams", and the English artist and author Edward Lear. 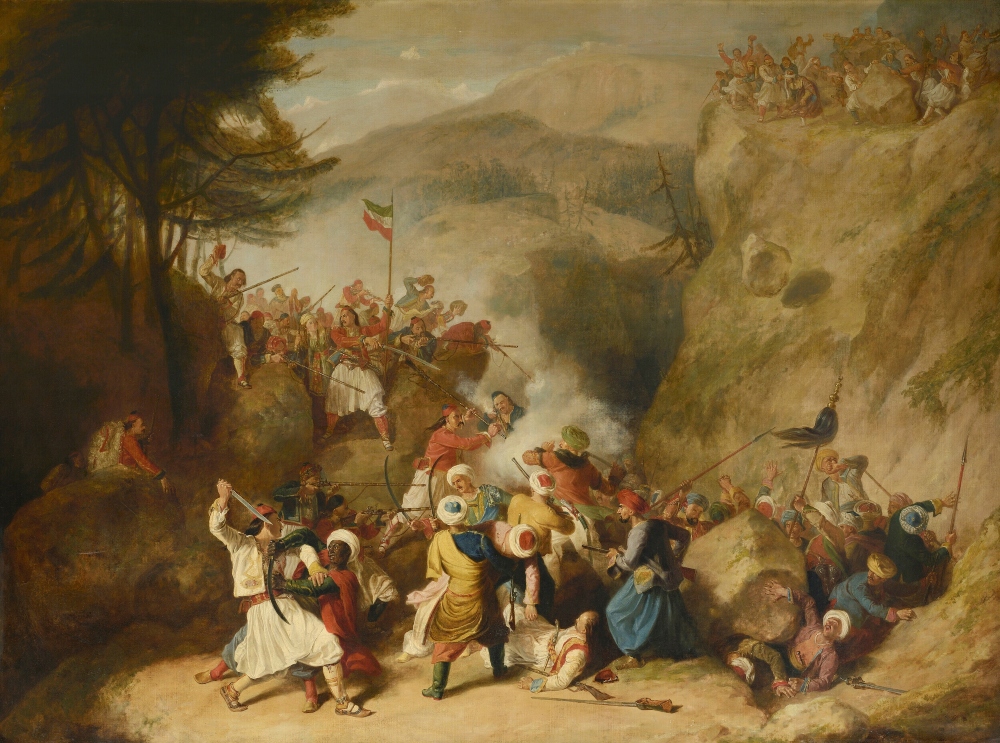 In the second section you will find paintings inspired by the Greek armed struggle against the Ottoman Empire, such as The Death of Lambros Tzavelas by Ludovico Lipparini, Greeks And Turks - The Battle Of Klissura, Epirius, 1792 by Denis Dighton, and the painting which is also used on the cover of the exhibition’s illustrated catalogue: a work by Francesco Podesti, representing The Death of the Freedom Fighter Spyros Dagliostros from Zakynthos – one of the first Greek revolutionaries, who was killed at the Battle of Sculeni (June 1821), part of the Greek revolt at the Danubian Principalities.

The third section includes scenes from everyday life and portraits of Greeks of that era, such as The Maiden of Athens by Theodoros Vryzakis, the depiction of a family of Greek refugees at rest, by Konstantin Cretius and a scene from Lord Byron’s Don Juan by Alexandre Marie Colin.

The curator thus aspires to give a representative display of the various genres and forms of painting that works of art that fall under the category of philhellenic art, as well as provide the visitors with an image of Greece and its inhabitants in the 19th century, during the struggle for independence and the first years of the newly-founded Greek state.

Read also via Greek News Agenda: Arts in Greece | Theodoros Vryzakis, the "painter of the Greek Revolution"; The visual representation of the 1821 Greek War of Independence through the eyes of Greek and foreign artists; Nikolaos Gyzis, the Greek master of genre painting