The flag of Greece and its history

The Greek national flag has a 200-year history; it was initially conceived during the Greek War of Independence declared against the Ottoman Empire on 1821. Although it has had some variations over the years, it has consistently featured a white cross against a blue background. Its current form was established in 1978.

Today, the Greek national flag features five equal horizontal stripes of blue (top and bottom) alternating with white, while the upper hoist-side corner bears a white cross in a blue canton. It is used both as a land and a sea flag, and also as the war and civil ensign. It is often referred to as i galanolefki "the (light) blue-and-white", similarly to other flags dubbed, i.e., "the tricolour". Although the current design of the national flag is 200 years old, it has been in continuous use as the sole national flag since 1978; it was originally used only as the sea flag, while the official flag a Greece had a simpler arrangement.

The Law 851/1978 "Regarding the National Flag, the War Flags and the Emblem of the President of the Republic" determines the flag’s colours, design and ratio (2:3), and also the places and times where a flag or ensign must (or can) be flown, the type of pole used, when it should be flown half-mast, the contexts in which the use of the flag is forbidden etc. 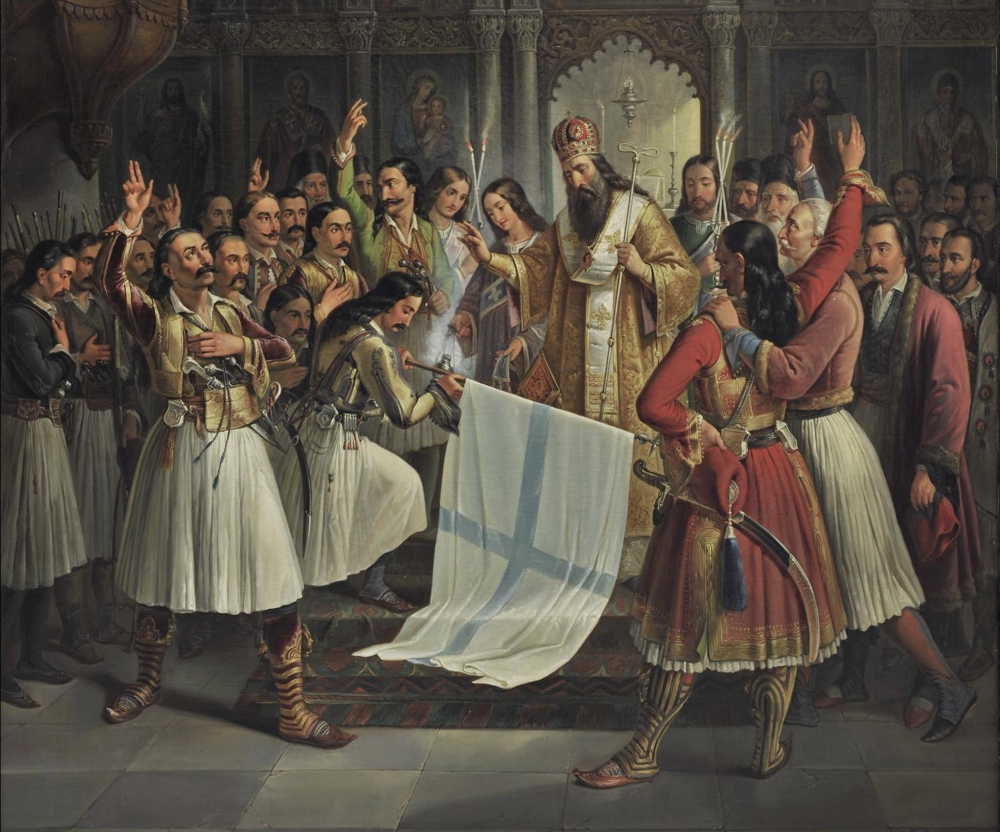 The Bishop of Old Patras Germanos Blesses the Flag of Revolution (detail), Theodoros Vryzakis, 1865 (National Gallery–ASM); in his portrayal of the "legend of Agia Lavra", the artist depicts the flag widely used by insurgents in pre-revolutionary Greece, as he does in most of his paintings

One of the first flags to be widely used by Greek revolutionaries since the failed Orlov Revolt of 1770-71 (a major precursor to the Revolution of 1821) featured a light blue cross on a white field, similar to what would later be the Greek national flag, but with the colours reversed (reminiscent of what is now the flag of Finland, but with a Greek cross instead of a Nordic one).

On the outbreak of the Greek War of Independence against the Ottoman Empire, different units of the Greek army carried their own flags, which were of various colours, often using a tricolour design and featuring a series of symbols, such as the phoenix, the laurel, the anchor, images of saints or the fasces-like emblems of the Filiki Eteria, the secret society that orchestrated the revolt. The cross was, however, already prominently featured on many of these flags, as a symbol of orthodox Christianity, one of the core unifying factors among the revolutionary fighters. 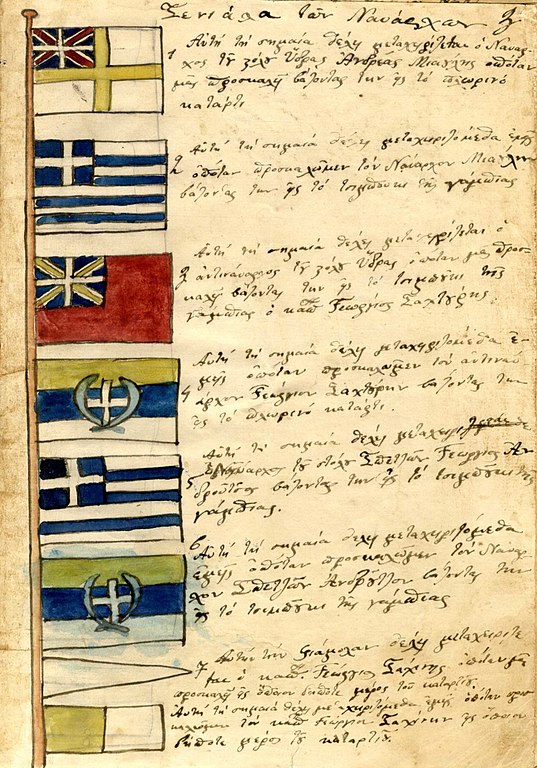 A manuscript from 1823, depicting the various flags of the Greek revolutionary navy and its various admirals (Wikimedia Commons)

In early 1822, the First National Assembly of Epidaurus –the first national representative political gathering in revolutionary Greece– passed a number of decisions, among which was the establishment of a Temporary Constitution of Greece. This constitution included a decision to adopt a universal national flag, decreeing that its colours would be blue and white, and that its particular arrangement would be determined by the Executive body.

On 15 March 1822, nearly one year after the declaration of the war, the Provisional Government issued the decree No.540, signed by the President of the Executive, Alexandros Mavrokordatos, which described the designated patterns: a simple white cross on a blue field for the land flag, nine stripes, alternate blue and white, with a white cross against blue in an upper left canton for the sea flag, and a blue flag with a white canton bearing a blue cross on the upper left-side corner as the civil naval ensign.

There has never been an official explanation regarding the choice of either the colours or the design; according to Greek lore, the blue and white are a reference to the colour of the sea and the spume of the waves, while the horizontal lines are nine echoing the number of syllables in the phrase "Eleftheria I Thanatos" ("Freedom or Death"), the motto of Greece, adopted by the Filiki Eteria (possibly inspired by the quotation "Give me liberty, or give me death!" attributed to American politician and orator Patrick Henry) or the number of letters in Eleftheria. However, this widespread theory has never been confirmed by an official source. 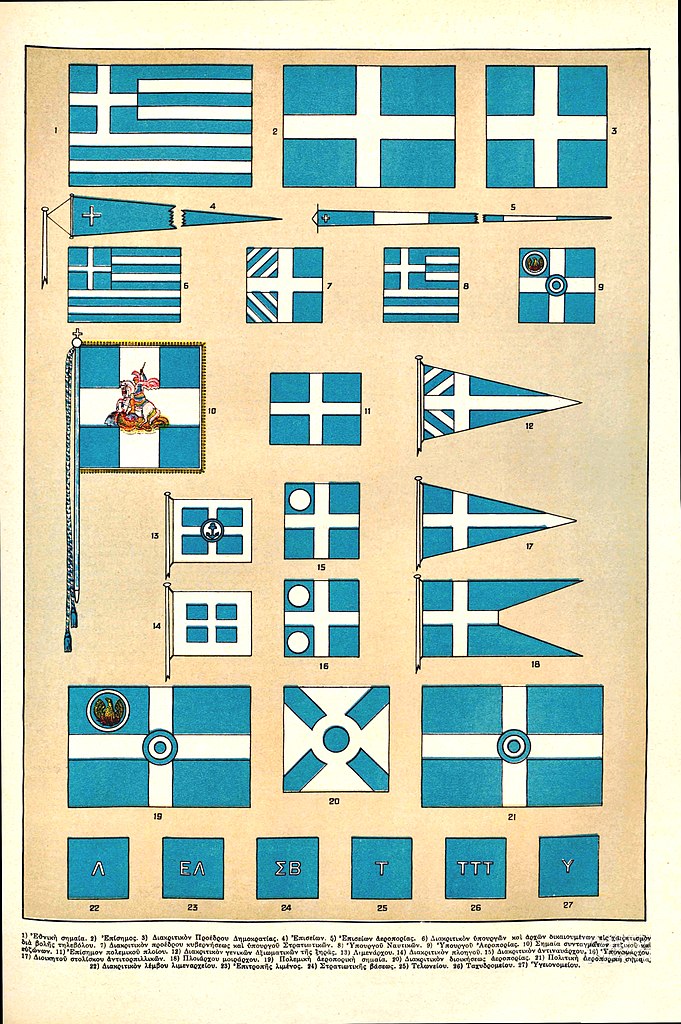 Throughout its history, the flag has been subject to alterations, mostly reflecting the political and constitutional developments of the Greek state. This concerned its proportions (which switched between 2:3, 7:12 and 7:10), the hue of blue used (alternating between lighter and darker shades), the addition of emblems, and even the use of a particular design over the other.

In 1828, the right to fly the sea flag (initially reserved for warships) was extended to merchant ships (instead of the civil naval ensign) in recognition of their contribution to the Greek struggle.

In 1833, after prince Otto, son of the Bavarian king, had been placed on the throne of the newly-established Kingdom of Greece, the minor coat of arms of Bavaria –an escutcheon bearing white and blue lozenges and topped by a crown– was added in the centre of the cross for military flags (both for the army and navy). In 1863, after Otto had been deposed and George I, prince of Denmark, ascended to the Greek throne, a crown was introduced at the centre of the cross for all flags. 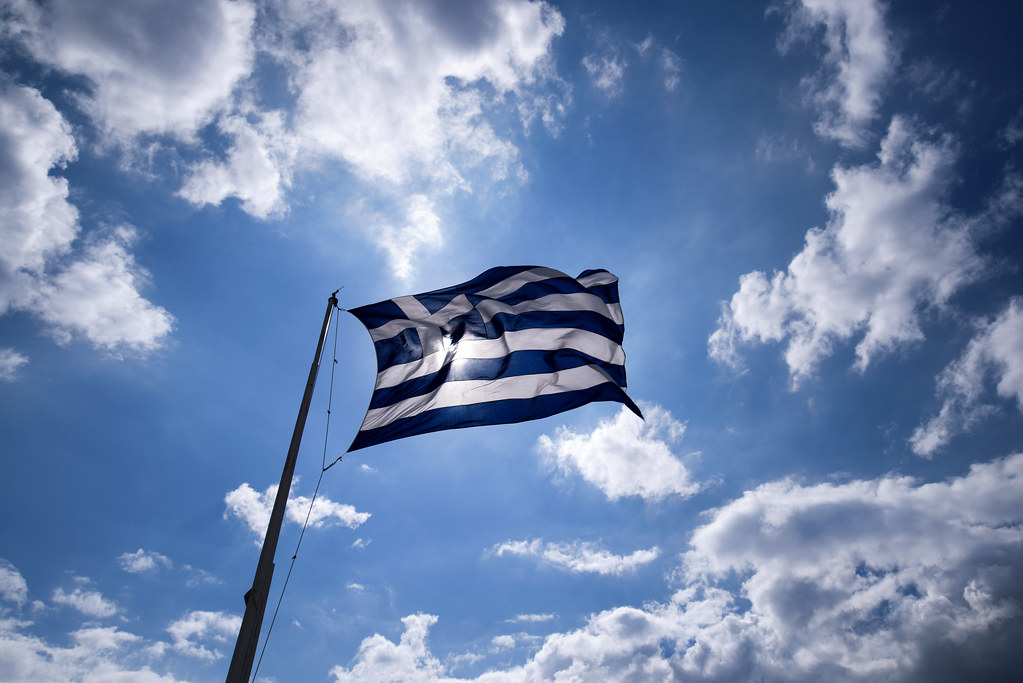 In 1969, during the dictatorship, the sea flag became for the first time the official flag of Greece. Following the restoration of democracy, the "land flag" –a white cross on a blue field– was designated as the sole national flag in 1975; however, this changed one final time in 1978 (Law 851/1978), which definitely established the use of the former "sea flag" with the nine stripes as the sole official national flag of Greece.

Greek flag day is celebrated on 27 October, on the eve of Ohi Day ("No" Day) – one of the two Greek national holidays, which commemorates the rejection of Italian fascist leader Benito Mussolini’s ultimatum by Greek prime minister Ioannis Metaxas on 28 October 1940, and the subsequent counterattack against the invading Italian forces on the Greek northwestern front.