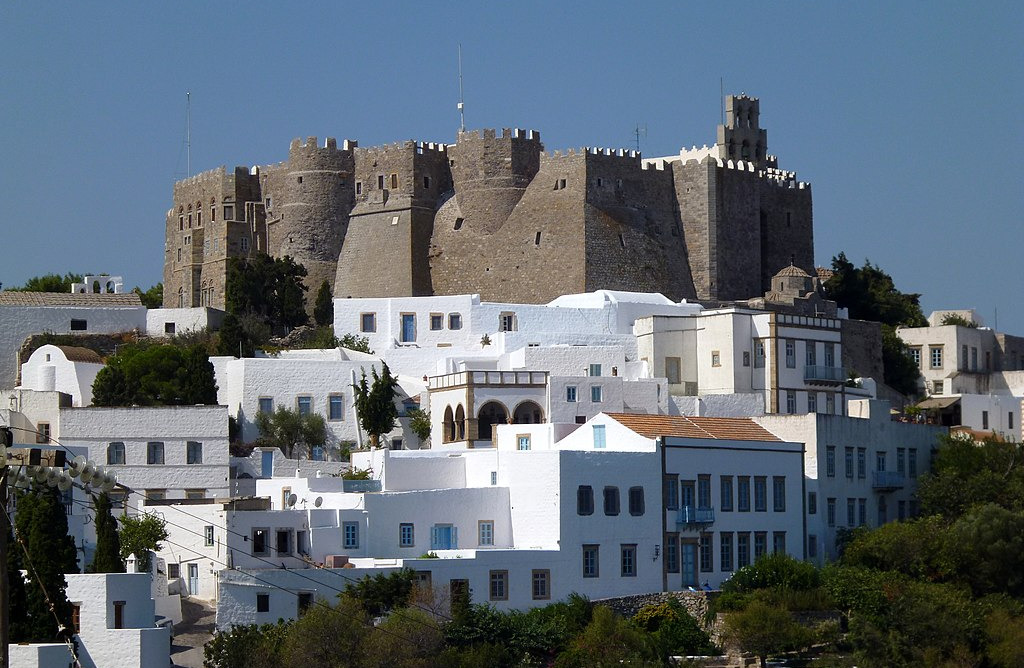 The small island of Patmos, part of the Dodecanese complex in the central Aegean, is known, above all, as the location where John the Apostle received his visions and recorded them in the Book of Revelation, the final book of the New Testament. An impressive monastic complex, dedicated to him, was founded there in the early 11th century.

The monastery stands on the site where Saint John is believed to have written his Gospel, including the Book of Revelation (also known as the Apocalypse); it is also located near the grotto where the apostle is said to have received his Revelation, hence called the Cave of the Apocalypse. Both the Monastery and the Cave, along with the rest of the historic centre of the island’s Chora (main town) have been declared a joint World Heritage Site by UNESCO in 1999 as an "exceptional example of a traditional Greek Orthodox pilgrimage centre of outstanding architectural interest".

The Cave of the Apocalypse

The island of Patmos was first settled by Dorians and then by Ionians. When it became part of the Roman Empire, it served as a place of exile, along with other small islands of the Aegean.

John the Apostle, traditionally identified by the Eastern Orthodox Church with John the Evangelist, and referred to as "John the Theologian", is considered to have been exiled to Patmos during a time of persecution under the Roman rule of Domitian in the late 1st century. According to tradition, while residing in a cave on the island, he received a series of prophetic visions which he recounted in the Apocalypse, the last book of the New Testament (a word coming from the Greek apokálupsis, "unveiling, revelation"); he is hence also known as John of Patmos and John the Revelator.

The site of the revelatory visions, known as the Cave of the Apocalypse, is situated halfway along the road linking the port with the Chora (main town), which sits on top of the island’s mountain. The Holy Cave of the Apocalypse has been transformed into a place of worship, where visitors can see the dent on the wall of the cave, where the Evangelist was said to lay his head; according to tradition, the Voice of God could be heard coming from a cleft of the rock, which is also still visible today. The southern part of the cave has been turned into a church dedicated to Saint John the Theologian, while later a Chapel of Saint Anne (mother of Mary) was added, incorporating the cave, which is now entered through the chapel.

The Monasteryof Saint John the Theologian

In the 7th century, Patmos was ravaged by raids of Saracen pirates and remained virtually uninhabited for the next two centuries. In 1088, Abbot Christodoulos Latrinos (now known as Saint Christodoulos the Blessed of Patmos), who had already founded monasteries on Leros and Kos, presented himself at the court of emperor Alexius I Comnenos in Constantinople, proposing a plan to repopulate Patmos by creating a monastic community; Alexius indeed granted sovereignty over the deserted island. In 1091, Christodoulos began the construction of the monastery Saint John the Theologian, over the ruins of a fourth-century basilica also dedicated to Saint John. 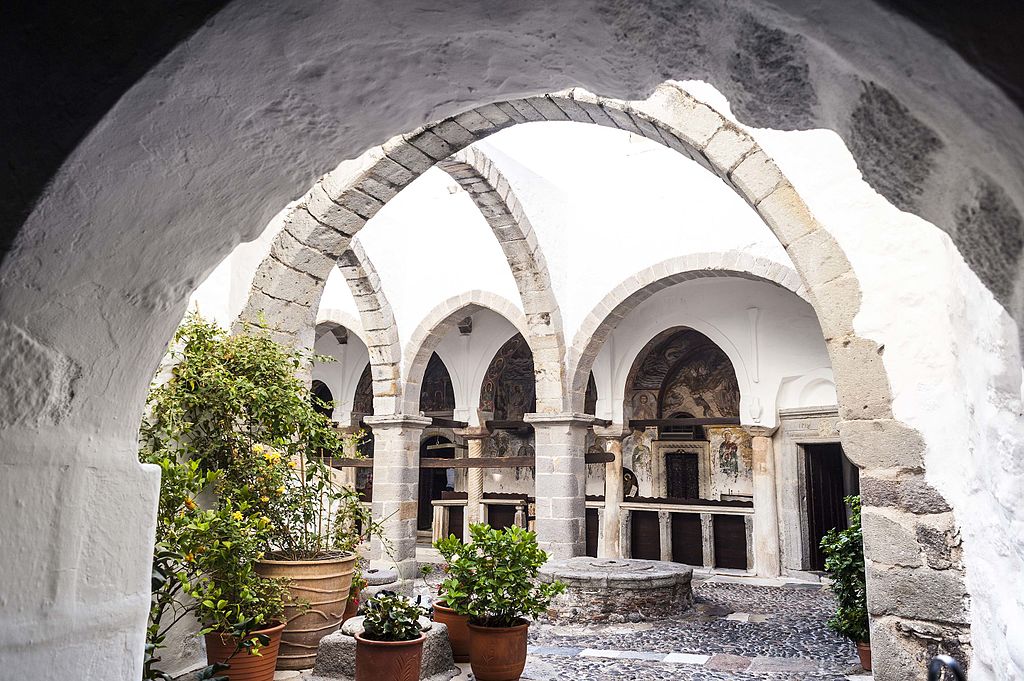 The monks were chased off by pirates in 1093 but returned a few years later to resume the works, bringing with them the relics of Christodoulos, who had died on the island of Euboea. The monastery was heavily fortified for fear of pirate attacks; through the years, it received various contributions from the emperors Alexius and Manuel Komnenos. Following its establishment, the repopulation of the area was encouraged, with a settlement evolving around the monastery’s walls. In 1204-1261 the monastery was affiliated with the Empire of Nicaea and acquired many territories in Asia Minor.

Inside the monastery, the main church features impressive icons and frescoes, while the Chapel of the Virgin, outside the main courtyard, has the oldest frescoes. The monastery houses an extensive library of 330 manuscripts (267 on parchment), including 82 manuscripts of the New Testament; it also houses important relics, including the skull of Saint Thomas the Apostle. Asteep flight of forty-three steps leads from the monastery to the Cave of the Apocalypse.

According to UNESCO, "there are few other places in the world where religious ceremonies that date back to the early Christian times are still being practised unchanged"; this includes the Byzantine ritual of Niptir ("Maundy"), a reenactment of the symbolic event of Christ washing his disciples’ feetahead of the Last Supper, which takes place on the Thursday of the Holy Week (also called Maundy Thursday). In accordance with this 4th-century ritual, after the Divine Liturgy takes place at the monastery, a solemn procession leads to the town hall square, where the monastery’s abbot (hegumenos) washes the feet of 12 priests. 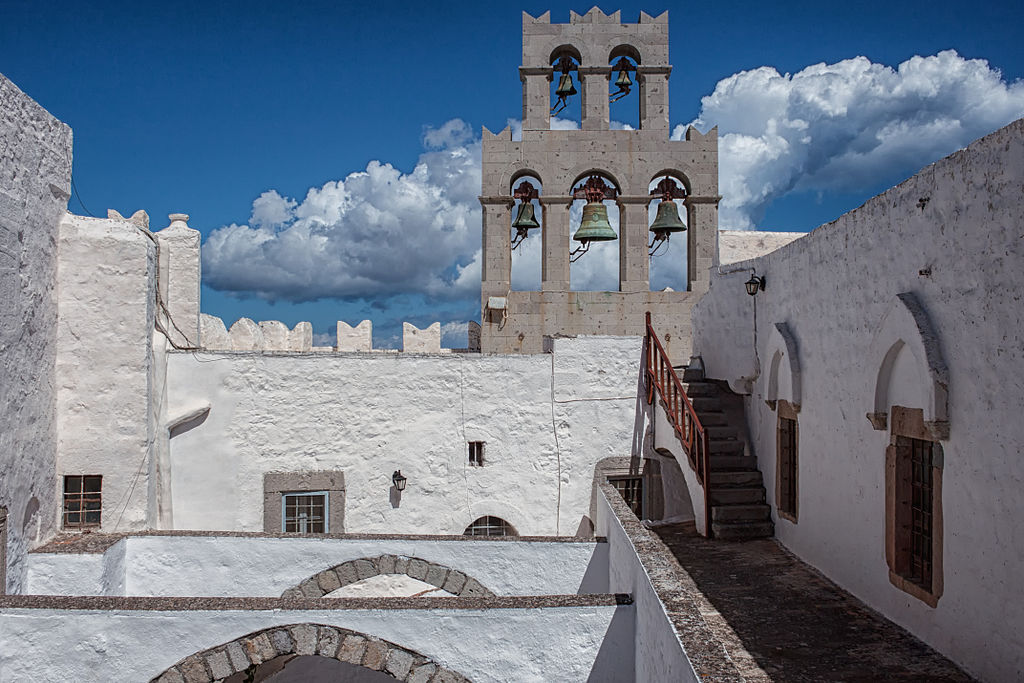 The Chora (main town) of Patmos, located 4 km from the small port of Skala, has continuously evolved since the 11th century, when the founding of the monastery transformed it into an important place of pilgrimage. In its centre, on the mountaintop, the imposing monastery of Saint John the Theologian with its grey fortified walls dominates the area. According to UNESCO, it is among the oldest and best preserved main townsof the Aegean islands, and is also the only example in Greece of an organised settlement which has developed as a supporting community around a fortified monastic complex. Still today, the Chora is a quaint town with white-washed houses, narrow arched streets and some picturesque small plazas.

UNESCO also cites as an important criterion for the inscription of the site the fact that Patmos’s Chora "is one of the few settlements in Greece that have evolved uninterruptedly since the 12th century", adding that "the authenticity of the settlement is also ensured by the retention of its morphological features and its building techniques with the use of similar or even the same, as far as this is possible, traditional methods and materials in building new constructions".

The property is protected by the provisions of the Archaeological Law 3028/2002 "On the Protection of Antiquities and Cultural heritage in general", and by separate ministerial decrees published in the Official Government Gazette. Protection and management are carried out by the Ministry of Culture, Education and Religious Affairs through the responsible regional service (Ephorate of Antiquities of the Dodecanese). Effective site management is also achieved through cooperation between secular and ecclesiastical authorities in all areas of common concern, to ensure that the character of the settlement will not be tainted by tourism.

Read also via Greek News Agenda: The Monastery of Daphni: retracing the city's Byzantine past; The historic Sumela Monastery in Trabzon; The medieval ghost town of Mystras; Early Christian and Byzantine Monuments of Thessaloniki

N.M. (Based on an article published on Punto Grecia; intro photo: Chora of Patmos and Monastery of Saint John the Theologian [by Valeria Casali via Wikimedia Commons])