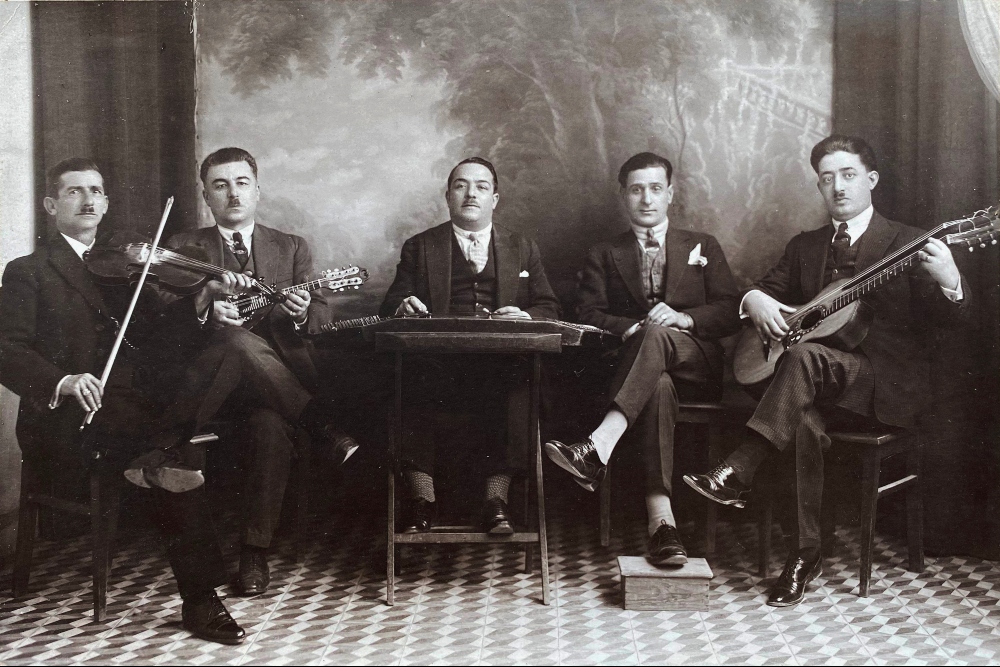 Rebetiko is the urban popular Greek music of the poorest classes of the first half of the 20th century. As of December 2017, it is inscribed on the Representative List of the Intangible Cultural Heritage of Humanity, created by UNESCO to help demonstrate the diversity and importance of this heritage.

The art exhibition Rebetiko, organised by the Culture, Sports & Youth Organisation of the City of Athens (OPANDA), aims at visualising the essence and iconography of rebetiko music, through 125 works by 50 modern and contemporary Greek artists, including Yannis Tsarouchis, Tassos and Alekos Fassianos. The exhibition will be hosted in three venues from 10 February to 3 April 2022. 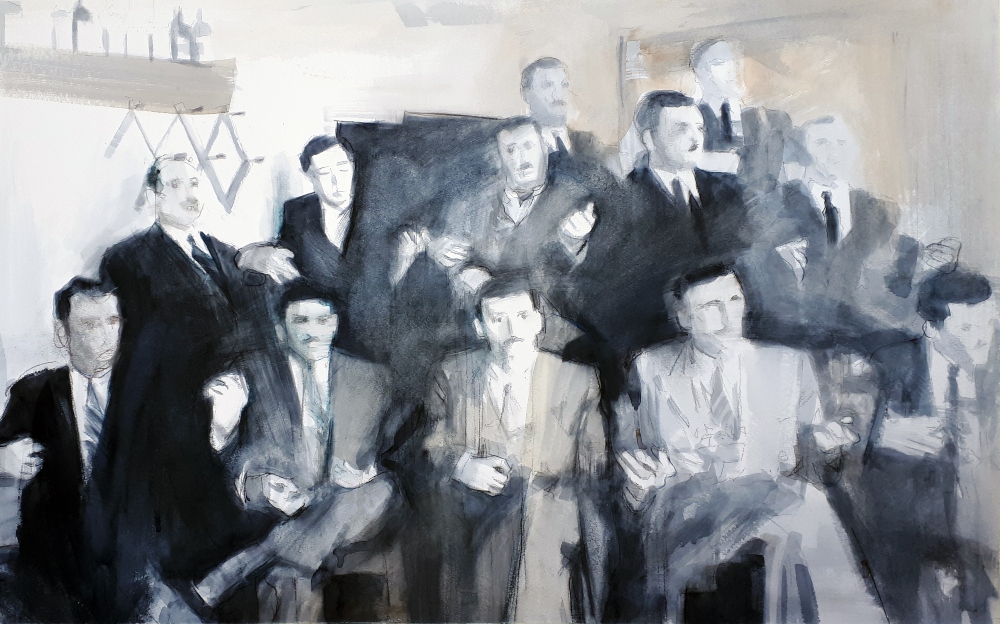 Rebetiko is basically an umbrella term, comprising several forms of music that evolved in Greece and Greek speaking parts of the Ottoman Empire during the mid and late 19th century, until they unified in the early 20th century to form the distinctive sound that is associated with the rebetiko today. It is largely based on oral tradition has been accurately described as "Greek urban blues".

As an intricate cultural concept, it is linked with music, song, dance and -especially in the past- with a particular attitude and way of life: the life of the outcast, the vagabonds and the displaced, but also of the labouring classes in large cities of newly industrialised Greece of the early 20th century. 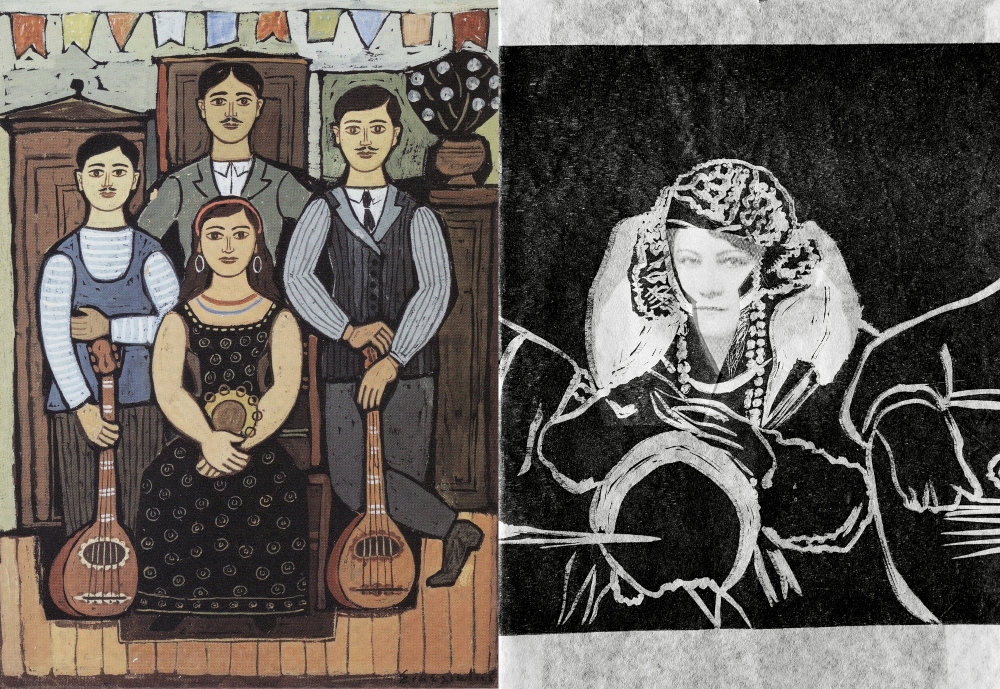 The term was coined relatively late in the evolution of the genre, and was basically popularised by scholarly studies in later decades. It derives from rebétis (pl. rebétes), a word of uncertain etymology, denoting a person (usually a man) of the prewar era, with a certain aspect and attitude, often involving a disregard for the law and a life in the margins of society. This type of character was usually dubbed mángas, koutsavákis, aláni, vlámis or mortis at the time – also depending on the region. Their music was more often referred to as laïká (urban folk), from the word laós (the common people).

The early origins of this music are closely linked with outcast life and subculture, since they can be traced back to the Athenian prisons of the 1830’s. The famous bouzouki – a modern variation of the byzantine string instrument tambouras – gradually gained popularity among the poorer, lower social classes of the big (chiefly port) cities, like Piraeus. 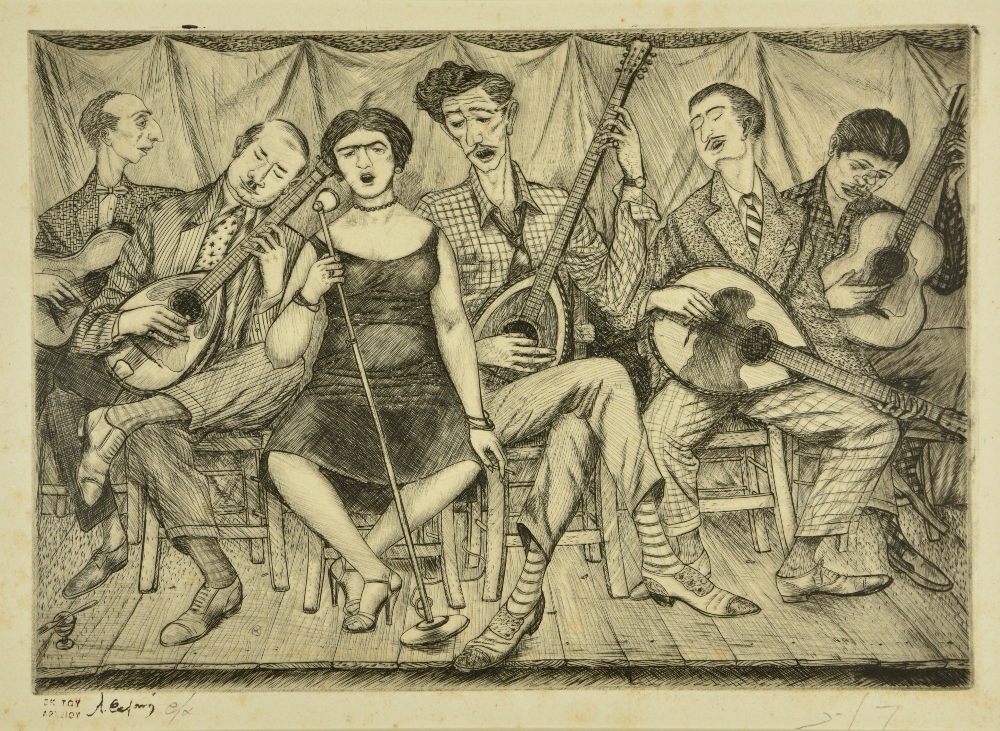 At the same time, the Greek populations of Constantinople, Smyrna and other major cities of Anatolia had created their own popular music, based on traditional Greek and oriental rhythms, often performed in music parlours called Café Aman. The population exchanges carried out following the Greco-Turkish War of 1919-1922 caused a great influx of Greek-speaking refugees in major Greek cities, especially Athens, Piraeus and Thessaloniki.

Thus, the 1920’s mark the time when various musical traditions and styles merged together, creating the typical sound of what became known as rebetiko. By that time, this was basically the music of the common folk in large cities, not having yet completely shed its ties to underground culture. Gradually, more and more music labels began recording rebetika songs. The genre met with increasing popularity, and was gradually assimilated by the mainstream. 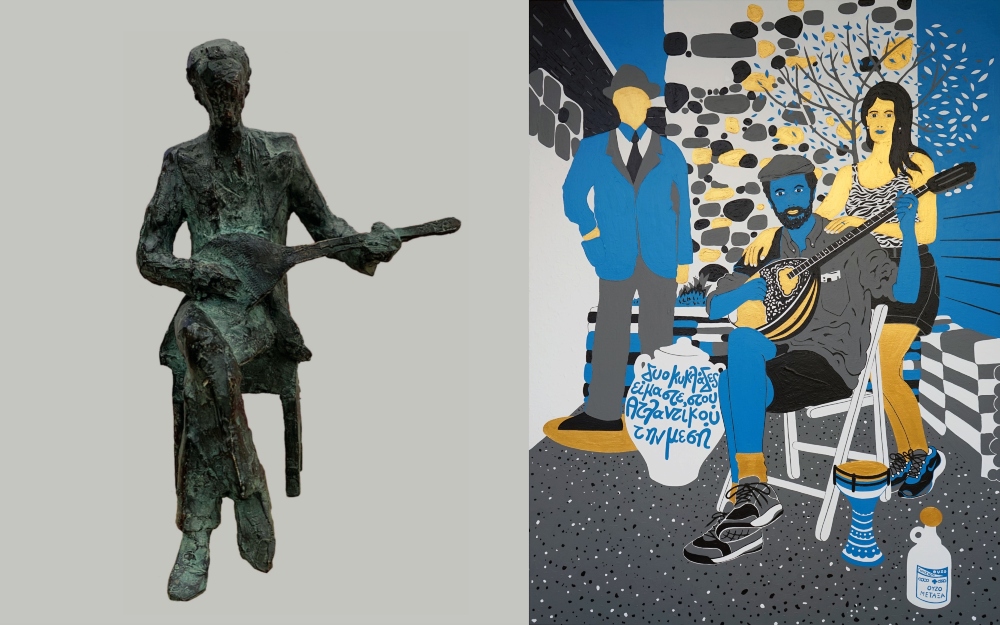 The thematic exhibition Rebetiko "is all about love, escape, ‘joyful mourning,’ and all the thoughts, memories, and symbols associated with this ‘major occurrence in modern Greek culture’", according to its curator, Christoforos Marinos (OPANDA Curator of Exhibitions and Events). As he points out in the exhibition's catalogue, its aim is to represent rebetiko music and its "mythology" through a contemporary visual outlook, and explore how contemporary visual artists can engage emotionally with rebetiko and "translate it into image".

"To this day, when the words rebetiko and visual arts are mentioned in the same breath, the first things that come to mind may be Alekos Fassianos’s illustrations for books by Elias Petropoulos, Tassos’s engravings for [Sotiria] Bellou’s album covers, or the zeibekiko dancers that were such a frequently represented subject in Tsarouchis’s paintings", writes Marinos, adding that "Rebetiko intends to expand the visual representation of the world of rebetiko, fundamentally changing the way it is perceived in the visual arts". 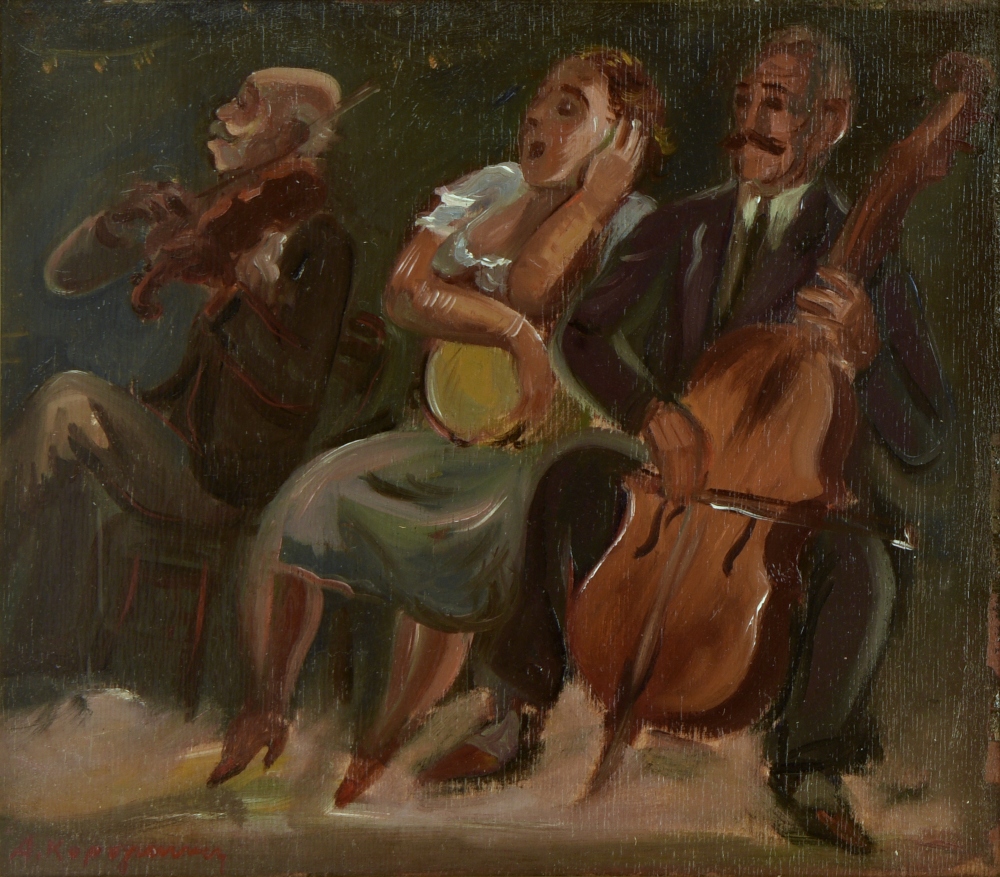 The mayor of Athens, Kostas Bakoyannis, pointed out in his statement that the majority of the works showcased have been commissioned by the Municipality of Athens specially for this exhibition, so that contemporary artists can converse with the artistic heritage left by the great moderns, on the theme of rebetiko and its interpretation by people of our times. The exhibits include paintings but also engravings, photographs, video and sound installations and performances. 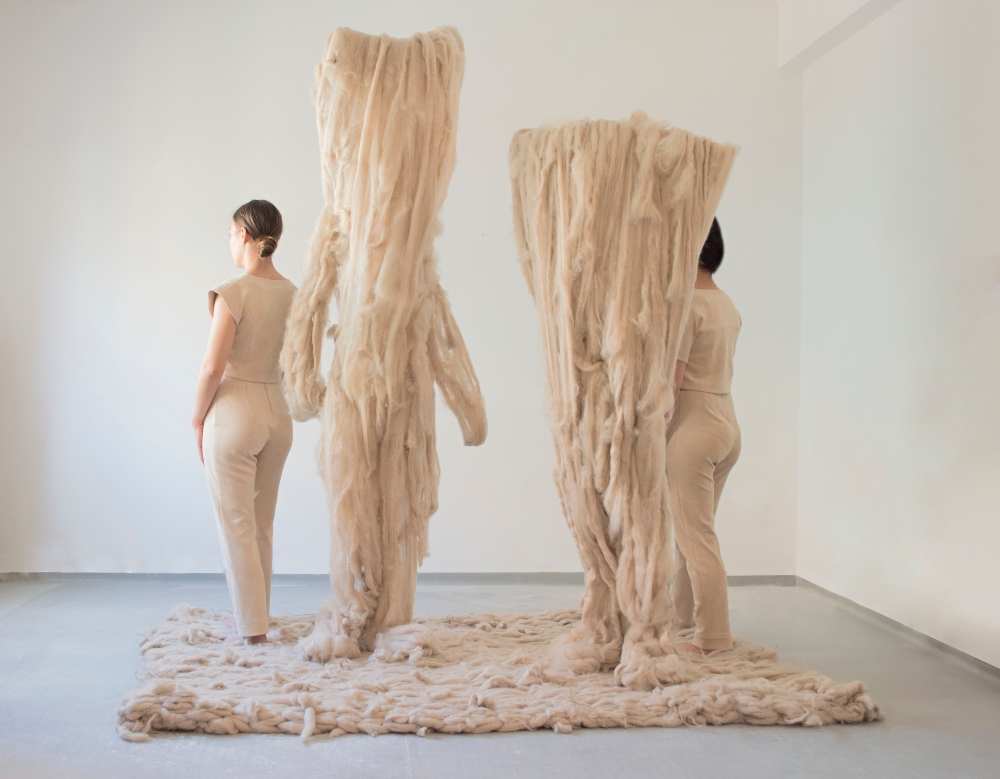 The exhibition (10 February – 3 April 2022) is hosted in three venues –the Municipal Gallery of Athens in Metaxourgeio, the Arts Centre of the City of Athens at Eleftherias Park and the foyer of the Olympia Municipal Music Theatre "Maria Callas"– and admission is free. It is accompanied by a bilingual catalogue, with texts by the participating artists, guest writers and rebetiko scholars.

Read also via Greek News Agenda: Rebetiko music: From the margins to the mainstream; Alexandros Psychoulis on the idea of symbiotic bliss & the reality of working as a visual artist in Greece; Panos Charalambous on the 180 year history of Athens School of Fine Arts; The glory of Greek light through Tsarouchis’ eyes

N.M. (Photographs of the works taken from the official site of OPANDA; Intro image: The man on the left, Maria Tsagkari, 2021)