The worldwide study of Price Waterhouse Coopers “Cities of Opportunity 6”, analyzes the trajectory of 30 cities, all capitals of finance, commerce, and culture—and, through their current performance, seeks to open a window on what makes cities function best. In its 2015 report, Athens was added to the 30 cities studied, ranking at number 23.

The study examines and identifies the factors that contribute to “a successful city” and “a resilient urban community”, evaluating the selected cities on the basis of 10 indicators, organized into 3 families: 1.Tools for a changing world: Education, technology, and global access, 2.Quality of life: Attaining the good life is anything but a walk in the park, and 3.Economics: Paying the way for progress. In total, the study uses 10 indicators to map a city’s performance: Intellectual capital and innovation, Technology readiness, City Gateway, Health, safety, and security, Sustainability and the natural environment, Demographics and livability, Transportation and infrastructure, Economic clout, Ease of doing business and Cost. 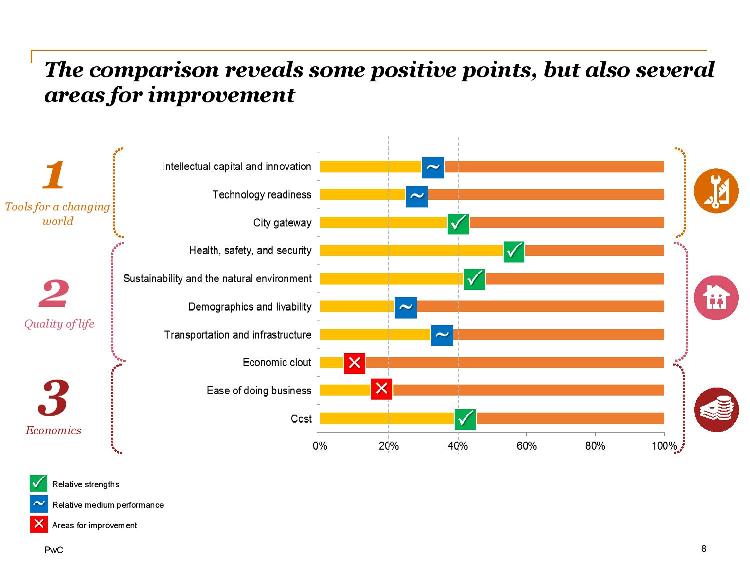 The indicators that were strong points for Athens were: Health, safety, and security, Sustainability and the natural environment, Cost and City Getaway. Areas that were identified as needing improvement were: Economic clout and Ease of doing business. In total, Athens is left behind when compared to the “classic” European/ western cities (London, Paris, Stockholm, Toronto) but also to the rising stars of the East (Singapore, Hong Kong, Tokyo),  while there is intense competition coming from the cities of Southern Europe (Madrid, Istanbul), which requires monitoring. Athens needs to “find her direction”, meaning where she fits in the three types of cities identified by the report: “western all time classics”, “eastern rising stars” and “the south”. The report concludes Athens can change her performance level with targeted interventions that will focus on further improving her strong points and by setting out a long-term strategic goal for her development.

Mayor of Athens, Yorgos Kaminis commented:  "This study is a very useful tool in the hands of the Municipal Authority and we will use it to implement both immediate and long-term priorities for the city. The city of Athens proposes a new model of development and social cohesion, with emphasis on openness, innovation and the creation of new jobs to stimulate the Greek capital city as an exclusive tourist destination.” The Mayor added that the report makes clear that a metropolitan type of local governance is needed in Athens, since many of the problem areas identified in the report lie outside the authority of the municipality of Athens.