Greece and the EU: Learning from a Crisis

The Hellenic Foundation for European and Foreign Policy (ELIAMEP) and the Barcelona Centre for International Affairs (CIDOB) recently published a joint monograph “ Greece and the EU: Lessons from a long-standing crisis”, edited by CIDOB Research Fellow in European Affairs Pol Morillas and ELIAMEP Director General Thanos Dokos, with the aim to provide a comprehensive view “on the changing landscape of both Greek and European politics as a consequence of the eurozone crisis. This collection of articles is the result of a joint workshop that was organized in December 2015 debating on the hypothesis of how Greece and the EU should have handled the transformation of the Greek political scene and the eurozone’s response to a systemic crisis respectively.

Upon introducing the topics of discussion, Thanos Dokos and Pol Morillas explain that the objectives of both the seminar and the monograph were to analyze, first, how the government of SYRIZA transitioned from an opposition force to a mainstream political party, second, what were the geopolitical dimensions of the Greek crisis and the historical trends that determined SYRIZA’s response, and third, which were the effects of the Greek crisis on Eurozone governance and the European policies to tackle the economic crisis. 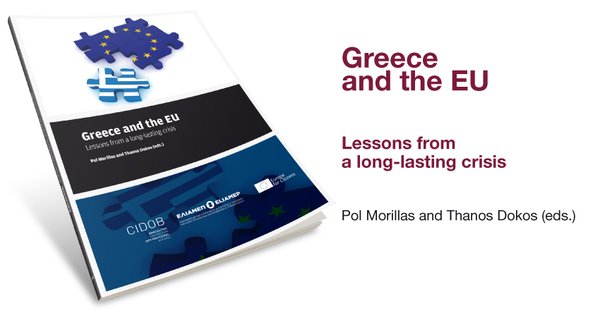 George Pagoulatos and Panagiotis Vlachos first discuss Syriza’s European Policy Choices on the Way to Greece’s 3rd Bailout Program, arguing that Syriza has been unable to cultivate effective coalitions and secure better results during the negotiations of the first 6-month governance after the elections of January 2015, which resulted in the ignition of a Grexit scenario during the summer of 2015 and further deteriorated the country’s enfeebled economy. In An Old Crisis, a New Government and the Creditors: “Plus ça change plus c’est la même chose”?, Dimitris Katsikas assesses the contents of the negotiations of the third bailout agreement between Greece and its creditors and unveils the mistakes made by the Greek government that resulted in a loss of credibility in the eyes of the creditors and peer European governments. In analyzing SYRIZA’s efforts to become a more mainstream political force and to Europeanize the Greek crisis, Filippa Chatzistavrou discovers “a post-left managerialism attitude in the Syriza government, tacitly accepting the premises of the third bailout programme and adjusting to its pro-austerity prerogatives”.

As far as the geopolitical dimension of the Greek Crisis is concerned, Dr. Thanos Dokos warns, in the fifth chapter of the monograph, about the risks entailed in assessing the Greek crisis merely from an economic perspective, underestimating the “severe repercussions for regional stability in southeastern Europe and the eastern Mediterranean, as well as the ability of the EU and NATO to play meaningful roles in those regions” had Greece being forced to leave the Eurozone. In this respect, Dr. Dokos analyses Greece’s geopolitical importance for the EU by explaining how the country is still playing an important stabilizing role in the western Balkan region, its contribution to the European energy security and its impact on the Eastern Mediterranean, but more importantly, the results of its relations with Russia and its fundamental role in tackling the refugee/migrant crisis amidst growing discontent with European processes and institutions.  Within the geopolitical context, Effie G.H. Pedaliu explores the historical perspective of the Greek crisis and analyzes “how the DNA of the country has influenced the Greek government’s position on the debt crisis and the formation of a new political system in Greece dominated by Syriza”.

The two last chapters of the monograph assess the lessons learnt, both for the Eurozone and EMU Governance, paying particular attention to the fact that “Europe’s rather unsuccessful management of the Greek crisis may be partly attributed to its understandably limited experience in saving a member-state of the Eurozone”.