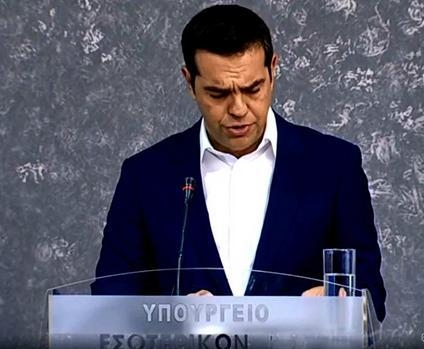 Opening his speech in which he presented a new plan on civil protection, Prime Minister Alexis Tsipras called the wildfires in eastern Attica "an unspeakable tragedy". "This tragedy has left a deep trauma in the country and in all of us", he said.

The General Secretariat of Civil Protection will be abolished and replaced by the National Emergency Management Agency (NEMA), which will be an autonomous state agency subject to the Interior Ministry, Prime Minister Alexis Tsipras said during the presentation of the new civil protection plan at the Interior Ministry on Thursday. He said that head of the new national agency will be a person with recognised experience and operational skills as well as well as scientific expertise. The head of the agency will be selected on the basis of all the rules of transparency and meritocracy, and the process will be under the supervision of the independent committee of experts and will be ratified by the parliament presidents. The agency shall include a permanent and standing scientific council, with representatives from all the Greek science research institutes involved in natural disasters. Additionally, in the agency structure and will be headed by a standing and permanent management directorate comprising the Fire Brigade, the Greek Police, the Greek Red Cross, the Coast Guard, the National Ambulance Service (EKAB), volunteer groups, the Armed Forces General Staff, the Forestry Service, the Infrastructures Ministry's technical services and the main research institutes of Greece, and educational institutes.

Moreover, the government has already ensured the total funding of the programme for the radical reorganisation and upgrading of the country's capability to be shielded from future natural disasters, said the prime minister. The earmarked funds, totalling 500 million euros, come from the European Investments Bank, the NSRF and the National Programme of State Investments will reach 500 million euros.

The PM also invited professor of "Ecology of Fires" at the renowned Max Planck Institute of the University of Freiburg, a unique professor in Europe in this field and head of the "Global Fire Monitoring Center” (GFMC) of the UN, Johann Georg Goldammer to set up a committee under the auspices of the UN-affiliated Global Fire Monitoring Center (GFMC) to investigate the factor that led to the Mati wildfire tragedy and propose measures to prevent such events from recurring, in a phone conversation on Thursday.

Tsipras said that he wanted the future committee to investigate facts and produce a report with necessary changes and policies Greece should adopt to prevent such deadly catastrophes in the future. He added that the move aimed at excluding any possibility of political influence and biased findings.

Goldammer, the world's leading professor of fires and climate change, who has been coming to Greece since 1985, had been interviewed by the Athens-Macedonian News Agency (ANA). The main cause of the deadly and devastating fire in Mati was "the alteration of the natural landscape and land-use change", said Goldammer, adding that the change of habits have led to the abandonment of the countryside, adding that everyone, not just the Greeks, should adjust to the changes that climate change brings.

Finally, he highlighted the role played by the unregulated construction and the narrow, deadlocked roads, while in the question of the agency on whether it was possible to evacuate Mati, Professor Goldammer answered, citing the international experience again: "No, in these circumstances any evacuation plan could not have worked', given that 'the fire expanded too quickly and with great severity'.

The postgraduate program “Strategies for Management of the Environment, Disasters and Crises” of the Athens University have published a report with scientific data and preliminary conclusions regarding the fires that affected Attica on July 23rd 2018, published in the Newsletter of Environmental, Disaster, and Crisis Management Strategies. According to the report, it was a typical case of wildland urban interface fire, that spread as an active crown fire. These zones are among the most probable to suffer human casualties globally. There are many such zones throughout Greece.

During the fire, strong west winds, with velocity exceeding 90 km/h locally and in certain time spans (between 17:00 – 21:00 on 23/7/2018), as well as their interaction with topography, played a crucial role to the rapid downslope spread of the fire front. The rapid spread of the fire contributed to the minimization of the available time for reaction, leading, in combination with other factors, to a great number of fatalities and casualties.