Greece - State of the Environment Report 2018 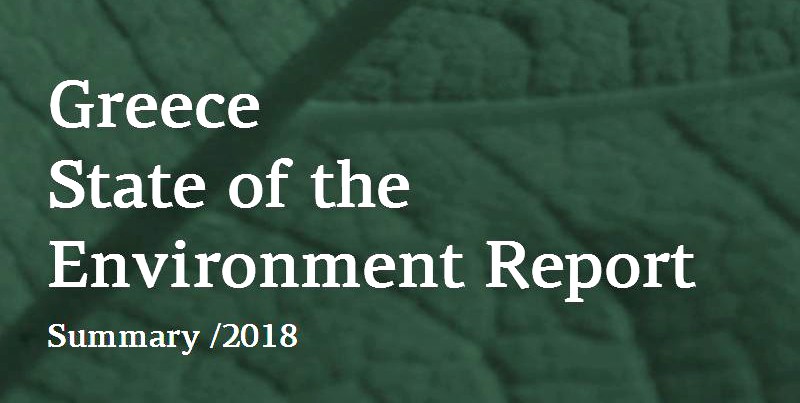 The State of the Environment Report (SoER) for Greece for 2018 was published by the National Centre for the Environment and Sustainable Development (NCSD - EKPAA). The report’s aim is to offer an integrated assessment of the overall quality of Greece’s environment, evaluating the effectiveness of state actions, policies and initiatives in terms of progress towards sustainability, and raising awareness regarding the most pressing ecological issues.

The SoER 2018 presents the latest, detailed information on the state of the environment in Greece in the fields of climate change, air quality, noise, nature, water, waste and horizontal environmental issues, thus providing a useful database to all stakeholders. This is the first report since 2013, when the latest State of the Environment Report for the period 2008-2011 was published.

According to the report, the state of nature and biodiversity in Greece is rather satisfactory compared to the rest of the EU, and the country has made significant progress. In recent years, there has been a considerable reduction (35%) of the ecological footprint (Greece has been placed on one of the best positions in Europe) and a respective downward trend in the carbon footprint of agriculture, livestock, forestry and fishing. Terrestrial eco-systems appear to be in better status than marine ecosystems, mainly because of overfishing. The recent significant increase of the marine protected areas included in the NATURA 2000 network is a positive advancement.

The report states that the elimination of threats to forest ecosystems, which receive the majority of pressures from various activities (mining, industry, agriculture and tourism), should be among Greece’s priorities. In this regard, particular progress has been made through the establishing of forest maps, which will contribute decisively to the ability to monitor and protect the Greek forests.

It is furthermore noted that in the transport sector, the expansion of the road network should be reduced in order to curb the landscape and natural ecosystems fragmentation.Undertaking an IP LIFE programme in 2018 ensures that this problem will be resolved within the next five years. The new Law No 4519/2018 that has recently been adopted aims to ensure that all protected areas have a responsible management body.

As far as air quality is concerned, a steady improvement has been documented over the last decades. The reduction of national emissions of the main pollutants (NOx, SO2, PM2,5, NH3) is significant, mainly due to cleaner electricity production (decrease of lignite power plants in the overall energy mix, decrease of their emissions due to secondary abatement measures, energy efficiency, RES, cleaner motors for vehicles etc.). The national reduction targets of the NEC Directive for 2020, compared to 2005, have been exceeded for the majority of pollutants as early as in 2016. With regard to urban air pollution, specifically, the evolution of measured concentrations of air pollutants over time indicates either a downward trend or stabilisation tendency, depending on the pollutant.

In terms of climate change mitigation, in 2016 (most recent data), the decrease of total greenhouse gas emissions (GHG) in Greece has continued both due to the gradual transition of the energy system to a lower-emission system and due to the reduced activity because of the economic crisis. For the post-2020 period, an immediate and ambitious targeting by the state will help to achieve more pronounced reductions through appropriate investments to transform the energy system. To this end, the national plan for energy and climate is currently under development for 2030 and beyond, until 2050.

With regard to climate adaptation, and especially climate change that cannot be avoided despite the mitigation measures, for the first time there is an officially adopted national plan, a National Commission has been set up involving the co-responsible Ministries, NGOs, economic stakeholders and the academia, and an institutional framework for the drawing-up of regional strategies has been completed. All regional plans are expected to be completed by 2019.

Regarding the management of water resources, the quality of water is generally good. Coastal water systems are achieving predominantly high to good ecological status, rivers good to moderate status, while lakes and transitional waters are predominantly in moderate and / or unknown condition, due to insufficient data and lack of observation station. In terms of chemical status, all categories of surface waters are predominantly in good condition. Finally, ground waters are in good condition in their vast majority, both in qualitative and quantitative terms.

As far as sewage treatment plants are concerned, despite inherent difficulties due to the country’s geomorphology (mountains, many small islands) and the seasonal population fluctuation in many tourist areas, there is steady progress, with an increase proportionate to the population served. However, it should be noted that there are no sewage treatment plants in settlements where there should be. Waste management remains the most problematic sector in Greece.

At the same time, the recycling of household waste remains constant at about 14%, one of the lowest rates in the EU. The adoption of the new National Waste Management Plan (NWMP) was a radical breakthrough, however the expected positive results have yet to manifest. It is nevertheless noted that such radical reforms require time to mature and produce tangible results. On the other hand, the extended producers’ responsibility schemes have shown some very good results in some cases.The new Recycling Law 4496/2017 was a very important positive intervention which explicitly establishes the obligationto separately collect the four waste streams (paper, glass, metals, plastics) and introduces control mechanisms.

The National Centre for the Environment and Sustainable Development (NCSD - EKPAA) was founded in 1999 to play a role equivalent to that of the European Environment Agency, on a national level. This regulation came into force in 2001, and the centre has been fully active since 2004. The NCESD is based in Athens and functions as an independent, non-profit organisation, supervised by the Ministry of Environment and Energy. Its areas of responsibility include climate change, biodiversity, water and waste management, and health.

The purpose of NCESD is to collect data from environmental databases, networks and institutions and to organise it in the form of reports and assessments; it also provides technical and scientific support to the Ministry of Environment and Energy, as well as other government agencies, regarding the establishment and implementation of policies and measures concerning the environment and sustainable development. The NCESD disseminates objective and reliable environmental information to end users (policy makers and general public) and raises awareness on environmental issues.

Read also via Greek news Agenda: Greece among EU's “big five” in blue economy; German Green Party MP Lisa Badum on climate change and the need to act at the EU and local level; Professor Viriato Soromenho-Marques: “Fear alone will not provide a sustainable future for the EU”; ENALEIA, the first school for professional fishing in Greece