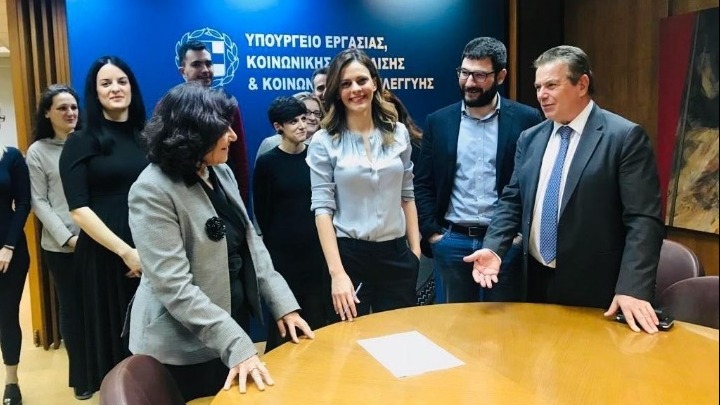 An 11% increase in the minimum wage and the abolition of the sub-minimum wage was signed by Labour Minister Effie Achtsioglou today (29.01). The new minimum wage, set at 650 euros, will be effective as of February 1, and will be applied to workers of all ages, abolishing thus the "sub-minimum" wage- which was currently in place for young people under 25 years old. This is the first such hike since the financial crisis erupted almost a decade ago.

"The increase in the minimum wage is a critical step in the process of reviving the labour market, a goal that we have been aiming at since our very first day in government, Achtsioglou added. The minister talked about the institutional interventions to protect and strengthen labour rights, such as: reducing unemployment (for the first time under 20% since 2011), combating employers' offences (measures and fines against underdeclared, undeclared and unpaid work), and re-establishing collective agreements in the country.

The increase was approved during the Greek government’s cabinet meeting, concluded late Monday afternoon (28.01). Addressing the cabinet, Prime Minister Alexis Tsipras said that 600,000 members of the Greek workforce will benefit from the two measures, while another 280,000 workers will be indirectly affected since the hike will result in the simultaneous increase of more than 20 different types of benefits linked with the minimum income. Tsipras noted that this increase, along with the restoration of the principle of the collective bargaining and extension of collective agreements –adopted last September- will have a positive impact on approximately 1 million workers.