Hagia Sophia: The violation of a symbol 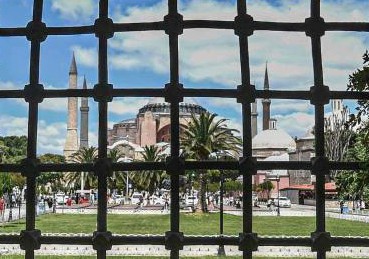 No logical or plausible excuse justifies the conversion of the Hagia Sophia into a mosque, all it does is add fuel to the fire of nationalism and religious fundamentalism, writes* Constantinos Alexandris, Secretary-General for Public Diplomacy, Religious and Consular Affairs at the Ministry of Foreign Affairs.

Flipping through an album of travel photos the other day, I recalled lighting a candle at the Taj Mahal a few years after the first Christian Indian Prime Minister decided to grant the temple to the local Church.

I admired once again the handmade rugs adorning the floor of the Notre Dame de Paris mosque, which the French government had handed over to the Muslim community in order to save it from decay, as the declining number of Christians attending the service could not cover its maintenance costs.

And there was that photo with the stunning minarets of St. Peter’s Mosque at the Vatican that the Muslim local governor of the former city-state decided to add to the building to structurally reinforce it as it was in danger of collapsing!

Oh, and that one there, with the Buddhist monks who in recent years have settled at the Buddhist monastery of Masjid Al-Haram, the former Grand Mosque in Mecca, which following that terrible pandemic no longer accepted Muslim pilgrims…

And if all this sounds unrealistic or taken straight out from a science-fiction script, then think again, because something along those lines happened a few days ago when the Erdogan government decided to turn Hagia Sophia into a mosque, claiming that as such it will not only be preserved, but will also be better protected.

After all, as some Turkish officials have pointed out, this was precisely what their Ottoman ancestors had also done, "saving" the magnificent Church from "withering away" (according to the same officials).

When, you may ask, did this happen? Well, a mere 6 centuries ago – quite recently in other words! As if the Renaissance, the Enlightenment, the industrial revolution and an unprecedented scientific and technological revolution have not taken place in between.

But what am I saying? Aren’t they all fraudulent Judeo-Christian conspiracies from which modern Muslim Turkey must "cleanse" itself? The questions are purely rhetorical…

It is quite clear that no logical or plausible excuse could justify the violation of a symbol – because this is exactly what the decision for the conversion of Hagia Sophia amounts to. This is not just contempt for history or UNESCO or an international treaty: it is a violation. Hagia Sophia is not just any church, it is a symbol.

It is an emblem of a long historical period, of an entire civilization, just like the Taj Mahal, St. Peter’s, the Parthenon, the Masjid Al-Haram, the Rumi Mausoleum; and turning it into a mosque is an attack on this civilization.

But more importantly, it is also an attack against what the modern world now considers its achievements, such as respect for diversity.

What is the purpose of all this? That the Erdogan government confirms, after 6 long centuries, the fall of Constantinople? Does it really feel it needs to? Or to demonstrate perhaps the Islamic domination of the thousand-year-old Christian Eastern Roman Empire? Both incentives lead to a dangerous slippery slope.

They add fuel to the fire of nationalism and religious fundamentalism. Is this what the Turkish Government needs right now?

Does it need to play to the gallery of those who fantasize about new conquests and throwing enemies into the sea? Or of those who envision the flag of Islam flying in Rome, Cordoba, Vienna and elsewhere? Is this the Turkey it visualises, or the Islam it aspires to lead?

In any case, to every man according to his deeds. Let us bear in mind, however, that symbols, even if damaged, always find ways to retain their shine and magic. If a Greek government in the future decided to turn the Parthenon into a Christian Church, one can be sure that it would not be the Parthenon that would be ridiculed…

In a nutshell, it is obviously a sovereign decision by the Turkish leadership to decide which direction it wants the country to take. But it is also a basic obligation of all others to protect ourselves from policies and actions that threaten to take us back to the distant past.

*The article was originally published on EURACTIV on 16 July 2020