Reading Greece: ‘enasynena’ – an Online Platform on the Combination of Poetry and Short Films

‘enasynena’ is a website which was created in spring 2018 as “a collection of poems and short films”, aiming at experimentation and the visualization of poetry. It is the joint effort of Giannis Sgouroudis, Katerina Mardiakioupi and Aggelos Koropoulis, who believe that “humans in their entirety are condemned to live poetically”. Giannis Sgouroudis was born in Athens in 1990. He has published two poetry collections Deja Vu (Αndy’s Publishers, 2014) and Stair Near the Sea (Thraca Books, 2015). His third book will soon by published by Koukoutsi Editions. Katerina Mardakioupi was born in 1988. She works as a lawyer and follows a post-graduate degree in Psychiatric Forensics at the Medical School of Athens. Aggelos Koropoulis is the man behind the website’s design. 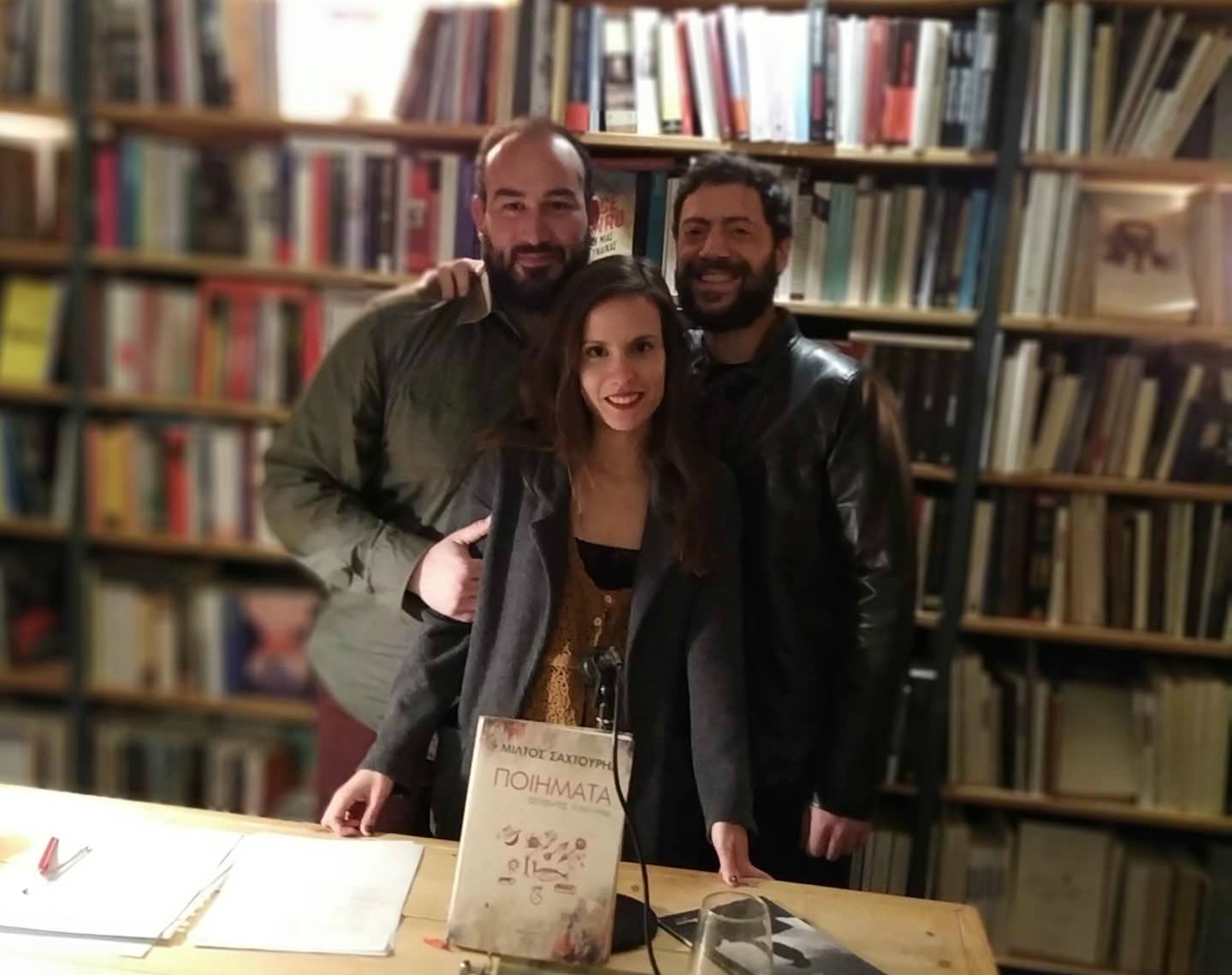 Τhe “enasynena” team spoke to Reading Greece* about their website, which started as “a collection of poems and short films”, noting that their primary goal was for “enasynena“ to “serve as a platform for new poetic voices to be heard, while trying to match the image with words through video poetry”. They comment on the difficulties a new poet is faced with to have his/her work published, as well as on the role the social media play in this respect and conclude that “poetry will continue to be deeply personal in its social character, which is what makes poetry unique and universal at the same time”.

“enasynena” has been online for over a year now. What’s the story behind this venture of yours?

There is a story behind every venture. Some of them are quite long, worth being told and read; yet, ours is rather commonplace. The two of us (Katerina and John) met through the internet a few years ago. John liked a Pessoa quote in my facebook profile and sent me a friend request. I saw that he writes poetry and I accepted his invitation. Soon afterwards, we decided to meet in person and what followed came out of our common love for poetry. The idea to create a website that would serve as a platform for new poetic voices to be heard, while trying to match the image with words through video poetry, was actually John’s idea. We act as two persons in the same body, whose distinct reading preferences triggered the implementation of a venture that aims to give new poets the opportunity to be heard, while it will enable us not only to learn about them but also to enrich our knowledge about the poetry of previous decades.

At first both John and I were quite reluctant since were are more attracted to the magic of paper rather than to an online presence. But then we said – why not?. That’s how we met Aggelos, who undertook the website’s design, with an outstanding aesthetic result. We played long with the idea before deciding to go ahead with it, not so much because we came up with insurmountable difficulties, but rather because we wanted to create something worth reading and be sure that we can act as a team. FunFact! We now also have Angelos’ daughter, Sofia, as a binding thread, since we are going to be her godparents. One love can easily lead to another!

“enasynena” started as a collection of poems and short films since what we primarily wanted was to offer poetry lovers something different and experimental, that is its visualization. Of course visual poetry is not something new; it has been tried by various new poets, sometimes more and sometimes less successfully. Herein lies the venture’s major difficulty. When words are powerful enough on their own, it’s quite risky trying to combine them with images. And, vice versa, images can have a tremendous power without words. So we focused on visualizing the works of new poets with respect primarily to the words. Our main focus of attention were words, to give them form based on how we felt when reading them. To attain our goal, we would of course have to recourse to other people, experienced in filmmaking and willing to help us with no financial gain since we have no economic resources to support our ideas. Taking all these into consideration, we have ‘frozen’ for now the idea of filming, without however abandoning it altogether.

During the tribute to Miltos Sachtouris, we tried for the first time as a team to implement our second goal, which was met with success. Takis Podaropoulos, the director of our first video poetry, loved the idea and offered both his personal time and energy to the goal, with no financial gain whatsoever. The same with Stavrina Poulou, who created the website’s introductory video. They both helped us move a step further with the demanding part of our project, and encouraged us for the rest. So, we do not abandon the idea of video poetry, but we are rather open to new co-operations and acquaintances with people willing to see their poems unfold in slow motion, behind the screen. We keep in touch with the cinema and the images we use to accompany the poems, not to mention the column by Dimitris Glyfos, titled zero-copy, with a snapshop of a movie of his choice along with his text.

You have recently organized two quite successful tributes to Miltos Sachtouris and Nikos Karouzos. What was the appeal especially among young people? What makes the poetry of these major post-war poets a recurrent point of reference for future generations?

The idea of tributes came up as a result of our decision to meet and come close to the people who support us, offering our own feeling for these post-war poets. The tribute to Nikos Karouzos came first, and Miltos Sachtouris followed. Both tributes, which were quite distinct as to their content, took place at the foothills of Acropolis, at the welcoming Little Tree Books n Coffee. Regarding Nikos Karouzos, the idea revolved around poems written by new poets on the occasion of the words of the poet himself ‘I enjoy craze, it ridicules the existence’. The response of young people to this call, to write inspired by the writings of another poet, was quite warm; maybe not so warm, since writing by order is not the easiest thing in the world. Yet the appeal of the tribute to mostly young people was something that we couldn’t have imagined. The bookstore was packed, both inside and out, and the smiles of the people there warmed not only our hearts, but the Poet’s as well, who may have been watching us from somewhere. The most moving part of the night was the presence of Karouzos’ last partner, the painter Eva Bey, who learned about the tribute by chance and decided to come, which made us quite nervous. Her warm hug in the end and her words were the best award we could have expected.

The tribute to Miltos Sachtouris followed almost six months later. The starting point was different, yet our energy remained the same. This time, we attempted to experiment more actively with video poetry and thus we decided to read Sachtouris’ own poems in a place in Metaxourgeio and let Takis Podaropoulos, an experienced director, film them. He liked the idea and helped us with the video, which was officially presented during the night of the tribute. (The video is available on our site and can be freely accessed).  Poets we love and admire read Miltos Sachtouris’ poems each in his/her own tone, and brought us closer to the vibrations of words. The second tribute took place in the same bookstore, and the presence of people of all ages was quite promising as well.

Let’s not forget that it’s not always easy to approach somebody and read them poetry, but this was our goal. Poetry carries such beauty, you simply have to touch it (and let it touch you) in the right places. We don’t know if there are recurrent points of reference. There may be but when you deal with poets who lived because they wrote, it’s not at all necessary. To use the words of Eva Bey at the tribute, art doesn’t wait. You cannot put your creativity on hold to have children, earn money, gather degrees. Art happens the moment you feel it, and this may be its point of reference.

Your website offers a chance to young poets to have their voice heard. Which are the main challenges new writers face nowadays in order to have their work published? What role do the social media play in the promotion of new literary voices?

Our website indeed offers a chance to young poets to have their voice heard, as so many other webpages, some of which we really admire for their exceptional work. As for the difficulties a new poet is faced with to have his/her work published, we reckon that money constitutes the main obstacle.  Publishing houses in Greece are one too many. Some among them have no publication standards as long as money is paid, and thus a writer is at a loss whether he/she was published because he/she has something worth read or was just published because he/she paid the money. Of course you don’t need somebody to tell you that you write well since writing goes hand in hand with subjectivity and you have to believe in what you write, but we reckon that this is not always the case. In addition, a writer’s anguish to be accepted by readers is most frequently there and we should bear in mind that poetry needs time to make good. We are optimistic that beautiful words are never lost. The social media can certainly help a young poet, but they can quite easily tear him/her down. That’s what the internet does. It depends on how one uses it.

In recent years, there has been an extraordinary burgeoning of poetry in every form: graffiti, blogs, literary magazines, readings in public squares to mention just a few. How is this strong civic awareness to be explained? Could poetry offer new ways to imagine what can be radically different realities?

Many people support that poetry’s strong social presence is directly linked to the crisis our country is faced with in all fields. In turbulent eras, history itself have shown that arts blossom since people are looking for ways to escape from reality into something more tender and intangible that only imagination can offer. It may be the crisis, or maybe our need for a more substantial contact with our inner self and the others, that have put poetry in the forefront: on walls and public squares. Yet, poetry will continue to be deeply personal in its social character, and that’s what makes poetry unique and universal at the same time. After all poetry has always been present in our everyday life. We simply were not so alert and it escaped our attention. Nikos Alexis Aslanoglou quite eloquently responded to the question as to whether poetry can offer new ways to imagine radically different realities. To use his words: Poetry doesn’t change our life/ the same constriction, the knot of rain / the mist above the city as it gets dark. / It cannot stop a decay that has gone deep / it doesn’t cure our old mistakes./ Poetry delays the transformation/ it makes our everyday act more difficult. And we tend to agree with him.