Rethinking Greece | Peter Frankopan: "We are living in an age of imperial revivals" 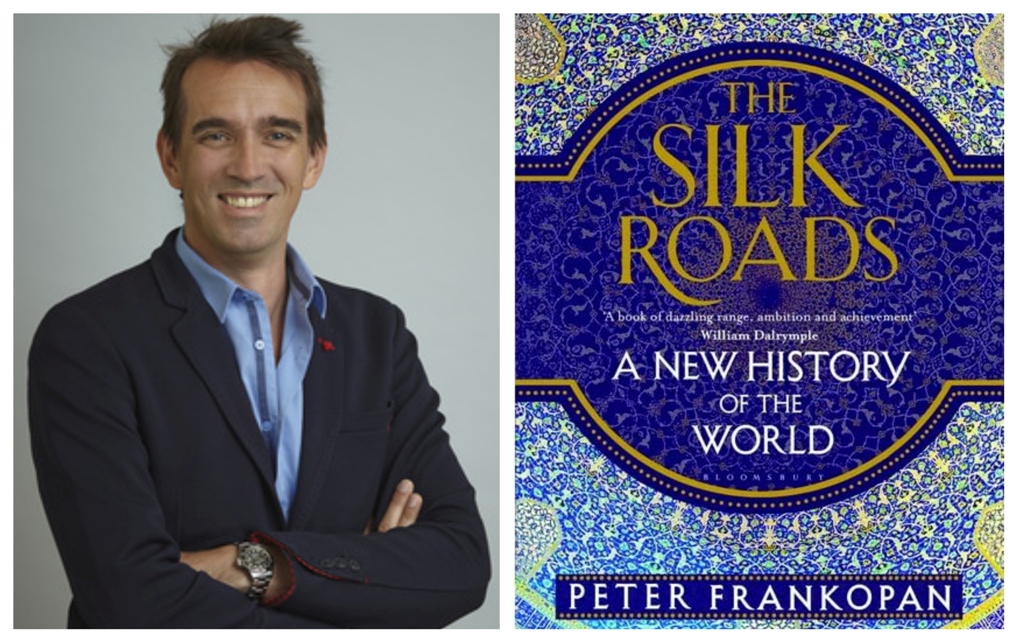 Peter Frankopan is Professor of Global History at Oxford University, where he is Stavros Niarchos Foundation Director of the Oxford Centre for Byzantine Research and Senior Research Fellow at Worcester College, Oxford. He is also UNESCO Chair of Silk Roads Studies at King's College, Cambridge. He works on the history and politics of the Mediterranean, Russia, the Middle East, Persia/Iran, Central Asia, China and beyond.  He often writes for the international press, including The New York Times, Financial Times Guardian, and has published various books, among which the besteller "The Silk Roads: A New History of the World", as well as "The New Silk Roads: The Present and Future of the World", and "The First Crusade: The Call from the East".  This past year, dr. Frankopan was the inaugural speaker of the newly established "Thalia Potamianos Annual Lecture Series on the Impact of Greek Culture", his three-part series of lectures being on "Global Greece: A History".

Peter Frankopan spoke to Rethinking Greece* on how Byzantine history can help us make sense of the modern world; on Greek language's reach beyond the classical world; how an exclusive focus on western Europe distorts our sense of history; the Silk Roads and his belief that the new world being born is centered in Asia; the significance of global cooperation, and finally, on the importance of robust institutions that hold leaders and governments to account.

You are SNF Director of the Oxford Centre for Byzantine Research. How can the study of Byzantine history help us understand the modern world? What aspects of the Byzantine legacy do you believe are still relevant to contemporary Greek identity?

But Byzantine history is particularly important because of the length of this period (usually interpreted as running from the foundation of Constantinople in 330 to its fall in 1453), but also because of the breadth of Byzantium’s relations with worlds outside. I do not think one can make sense of south-eastern Europe, the Mediterranean, the Middle East or North Africa without understanding connections within these regions as well as the connections between them. And then of course there are the ways in which the past is used in the contemporary world: to give one good example. It is the Byzantine sources that help explain the rise of Kyiv, its satellite states and its peoples. So when Vladimir Putin talks about Russians and Ukrainians, their histories and cultures we really need to know what he is talking about – and to know if and why what he says is wrong.

We are living in an age of imperial revivals, one where Putin talks of the ‘Russki mir’, Erdogan of a new Ottoman era, China of new Silk Roads. Few do so; but I am tempted to ask whether Europe is a revival of old Byzantine ideas too – both good ones and otherwise.

That is perhaps problematic for Greeks, who see themselves as the heirs of Byzantium; but having said that, there is very little actual interest in the Byzantine Empire, its system of government or its success over more than a millennium. It would seem to me that the Greeks hide their Byzantine connections. All can name the achievements of the ancients; what are those of the Byzantine Empire? It’s a very, very long list – but it usually gets ignored.

In your second ‘Thalia Potamianos’ lecture, “Greece: Legacies,” you traced the influence of Greek language and culture from into the Middle Ages on to the contemporary world. Could you give us some highlights of this lecture?

Well it seems to me interesting that the overwhelming focus of Greece, of Greek culture and language is anchored on the classical world. But the reach was much wider geographically and culturally. Stories of Alexander the Great spread deep into South East Asia, for example, and were still being told of his exploits two thousand years after his death. That strikes me as unusual – for despite what we might think, there were other important and successful leaders in history too; so why did his name and actions resonate so far and so wide?

Likewise, while the Greek of Plato, Aristotle and others clearly had a profound impact on philosophy, scholarship and culture (not only in Europe, but far beyond), I also wanted to explain how the Greek language was at least as important – perhaps even more so – in the spread of Christianity, especially in Africa and Asia, and also in Europe. Jesus Christ does not seem to have spoken Greek; his first language was Aramaic. And yet the Gospels were spread not in Aramaic or a related language from the Midde East, nor even in Latin, the language of the rulers of Judaea – the Romans. The Christian message was spread, in fact, in Greek.

And of course, even the Roman Empire switched into Greek too, which started to replace Latin around the 6th century to the point that Greek became the language of law and the language of empire. Again, this is unusual – and I wanted to explain how and why it had happened.

In 2018, three years after the publication of your best-selling book “The Silk Roads: A New History of the World”, you published a new book titled “The New Silk Roads - The Present and Future of the World”. Why is this region of the world and these networks so important today?

The easy answer is that is this region and these networks have always been important – it’s just that the way we think about history has distorted the past by pushing its focus exclusively onto Europe, and onto western Europe: everyone can name a French painter, Italian opera composer or German philosopher of the last 200 years; but what about the leading Romanian from this period? Who is the most important cultural figure from Serbia since 1750? Or from Poland? Or Hungary?

This constant self-admiration for the wonders of the west is dangerous for many obvious reasons. First, it makes relationships with others very one-sided; but it also makes them imbalanced – policy- makers, business people, teachers in China, India, Saudi Arabia, Russia and elsewhere know a great deal more about us than we know about them.

There are other answers too. The countries to the east of Greece are home to around 70% of the world’s population. In a mechanized, digital world, that means business opportunities, but also technological energy needs and demands. Europe’s rise in the last 300 years (or so) took place because Europeans gained access to resources either by taking them or by paying cheap prices. As that now changes, Asia is rising fast. And that new world being born seems to me to be centered in Asia. We all think decisions made in Brussels, Berlin and Birmingham matter; but it is not clear to me that they do. Just look at the responses to the attack on Ukraine; look at Biden going to Saudi Arabia despite promising he would not do so; look at the rising ambitions of China; look at the aggression of Russia towards the west.

So the world running east from Greece to the Pacific contains people, oil (around 70% of global supplies) and food – the majority of global wheat production of course, but also rice. We have misunderstood the challenges; we have underestimated the people we are dealing with; we have got their intentions wrong, and not thought about our options or the consequences of our choices. We are now paying the price for that.

You have talked about how the 21st century will be an “Asian century”. What would that mean for Greece and the Mediterranean region, which stand at the crossroads between “East” and “West”, as well as on the edge of the “Silk Roads” region?

At the moment, there are many variables partly because of the invasion of Ukraine, but also what lessons that teaches others – in China, but from Greece’s point of view, above all Turkey. These last months have been very turbulent and a sharp escalation in words and actions from Ankara, including from nationalist parties that are gaining considerable support. So in the short term, the first difficulty is to strategise potential consequences for the coming months and years ahead. Often, ministries (like businesses) are not very good at doing this sort of thing – as they are much more familiar with what seems to be ‘normal’, and so the starting point is how to get back to this ‘normal’ world. That too tells me something important about the failures to teach history properly.

It is one reason why companies go bust or disappear: Motorola was the world’s biggest phone company just over ten years ago; then it basically collapsed. If you get big decisions wrong, you are in trouble – and it no different for states. I was in 10 Downing Street in December 2019 and told them the biggest two threats of the next decade was pandemic; and lack of co-ordinated global response. I warned that this would of course cost lives, but also ravage economies to the point that opportunism from rivals would present magnified threats – mentioning Russia and energy in particular. I even wrote about this for a magazine that published it on the day that Wuhan informed Beijing there was a problem with a new infectious disease. So: you need to think ahead – and also know who to listen to, and what to do about it.

There is a wider academic debate about different paths to modernity. Can this discussion be applied to modern Greece’s historical path from its independence to the present day?

That is something that you should ask a political scientist rather than a historian. I am not really sure about what historical paths are – nor even what one means by modernity, other than the present day. Ultimately, I think, history starts with some very basic questions – about demographics, geographies, natural resources, climate, disease environments and so on. And then it is up to our various leaders to play their cards as well as they can. Some are better at this than others; some have to deal with domestic issues exclusively, and others with complex international relations; and some have to contend with warfare or pandemic disease. I think all these ingredients often blend together.

But the lowest common denominator is the creation and preservation of robust institutions that hold leaders and governments to account; to transparency and efficiency of bureaucracies that run the state; and to the ability of those who offer themselves for election to be able to explain to voters what the problems are, what the solutions are – and then to deliver these outcomes. It all sounds simple enough; because that is what good history really is: breaking down complex issues and helping create clarity of thought and clarity of causation. Having said that, it only took me most of my life to work that out; who knows what I’ll learn next… 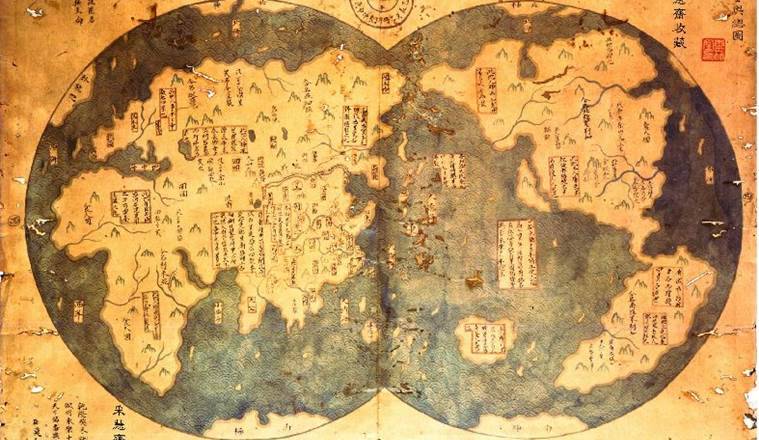 Illustrated on a piece of bamboo paper, this 18th century chinese map is entitled “general chart of the integrated world”. While some have claimed that it proves explorer Zheng arrived in the Americas before Christopher Columbus, scholars have questioned the map’s authenticity