Emergency Architecture in Times of Crisis

The economic crisis plaguing Greece, along with the influx of refugees inundating the country, have raised challenges not only for politicians and economists but for architects as well, who are called to design and implement emergency architectural projects in order to help manage not only the increasing number of homeless people within the country but also the housing needs of refugees and migrants. Within this framework, there follow some of the ideas developed by Greek architects in order address current infrastructural challenges:

Odyssea: A Journey to Unity 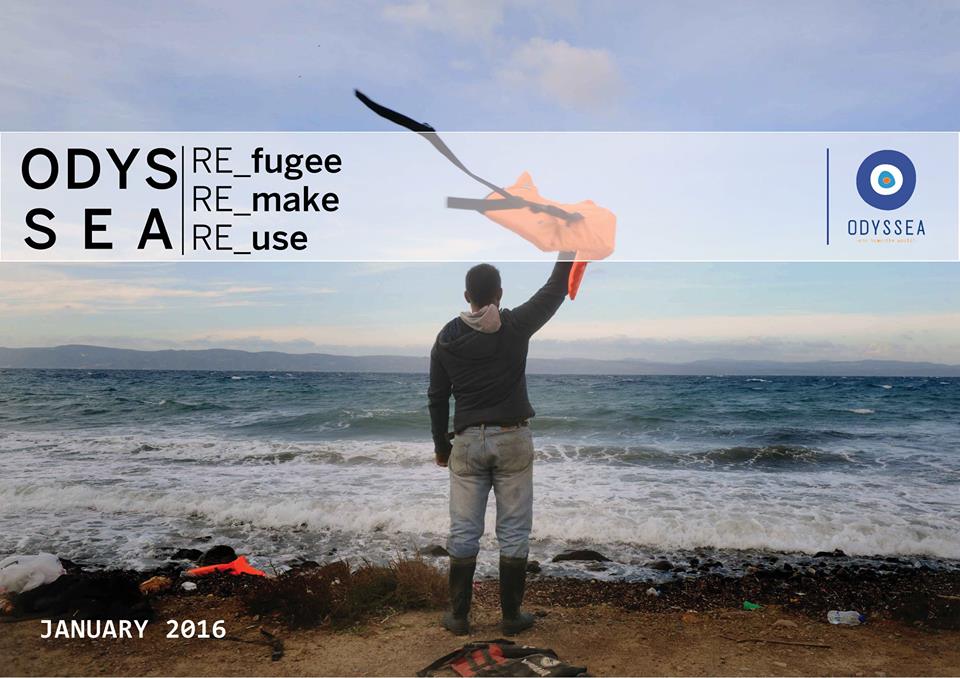 Once the refugees reach the Greek beaches they leave on the shores all their sea-safety equipment, including boats, ropes and life-vests. It’s indicative that just on the coast of Lesvos, there is more than 400 tons of such equipment left. Coordinated by Humanitarian Architect Jai Mexis and with the help of a vast network of volunteers, the Odyssea project aims to transform refugee waste into something of value for the people affected by the humanitarian crisis. The team uses the boats and equipment the refugees left behind and convert them into shelter space and other products such as bags and raincoats. In PIKPA Lesvos, the team managed in the span of 5 days to close 6 shelters with material gathered from the beaches just by using the existing steel structure of the little tents.

Homelessness and refugee hardships leave individuals and their families without shelter for an indefinite of time. By utilizing 3D printing technology for construction combined with eco-friendly materials Project IKOS aims to provide sustainable and cost-efficient shelter, wherever and whenever it is needed in the world. At present, the Project IKOS team is trying to raise money to “print” a 3D home, as proof of concept and donate it to the refugee camp “Moria” in Lesvos. 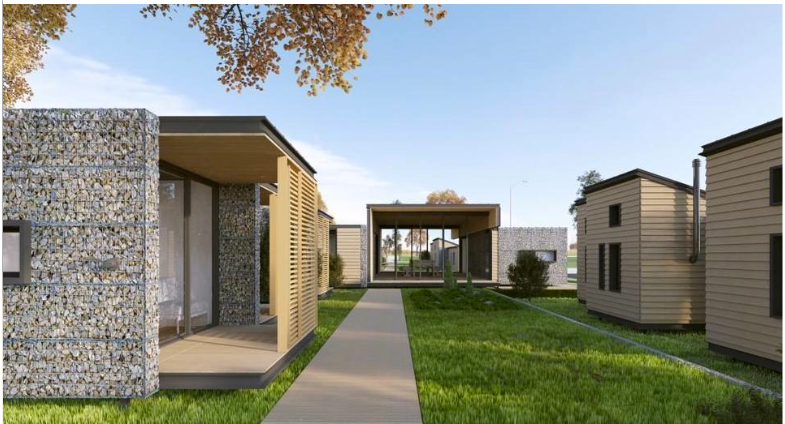 Co-founders of Riza3Architects, Maria Christoulia, Alexandros Valsmaidis and Stratis Skopelitis were motivated by the rise of homelessness in Greece to create innovative designs aiming to alleviate the problem. Their project won the Tiny Home Community Ideas Competition, topping out submissions from 160 teams around the world. The idea behind it was to create a small community of 12 residences on a city-owned, downtown site that could be integrated into the urban community. The three architects designed a community open to nearby areas and supportive of urban networks. All the buildings in the community have been designed according to bioclimatic architecture, are low cost and can be stored, moved or enlarged in order to greatly minimise their energy footprint. In the words of the jury, “this is a project that would make a difference”. 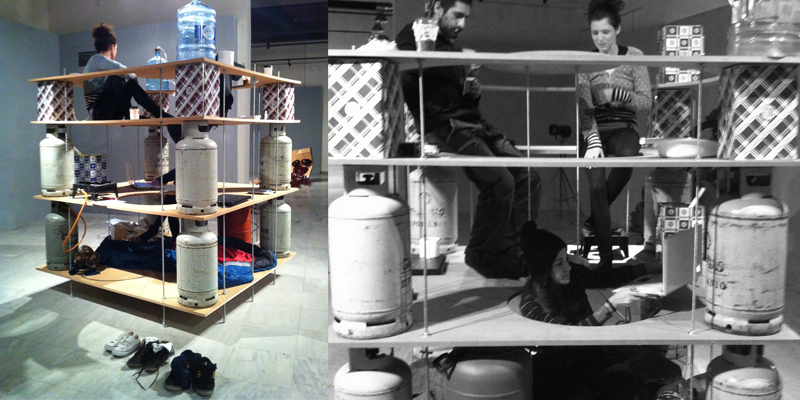 A recent symptom of the crisis in Greece is the impossibility of the urban dwellers to keep on being connected with expensive networks of the commons (energy, water, food). Developed by architect Zissis Kotionis, the «Triari» module is a paradigmatic device, both symbolic and pragmatic, to deal with empty or unplugged urban spaces. The "Flat- Triari" is an elementary living unit for 3 inhabitants. Its construction activates self sufficient and autonomous infrastructure elements as parts of a living space structure. It can be integrated inside empty apartments, in abandoned industrial areas and shaded public domains that have lost their old functional destinations. 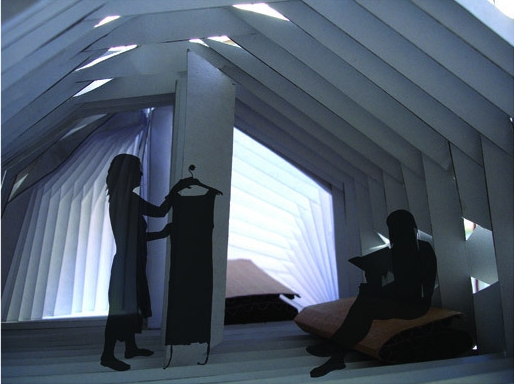 Sofia Vyzoviti’s proposal for an emergency shelter refers to the construction of an emergency eco-park strategically designed with the potential to transform within a few days into a settlement to shelter people affected by natural disasters and particularly earthquakes which are common in the region of Thessaloniki, Greece. In terms of urban design the proposal highlights opportunities for the re-appropriation of the redundant terrains of former military camps in the city. The proposed shelter unit is energy-efficient, recyclable, polymorphic and extendable, easy to transfer and install and capable of engaging the dwellers in its construction process. 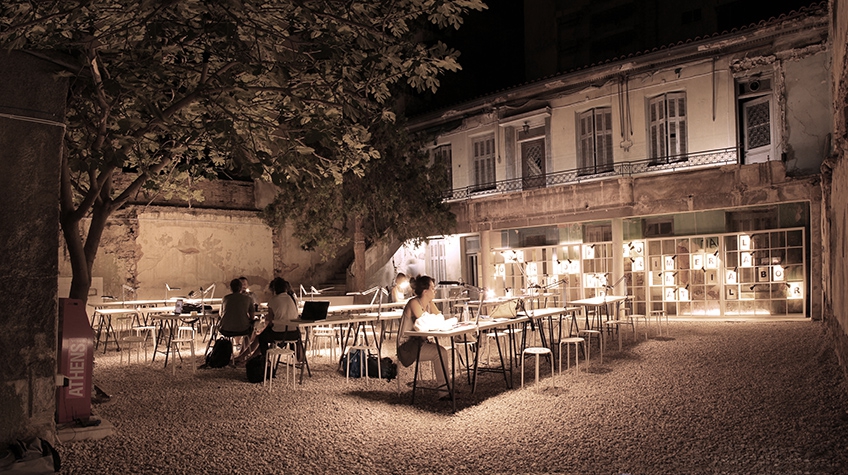 The Open Air Office, constructed in central Athens by Aristides Antonas in 2011, consists of a systematic transformation of small-scale objects into an urban condition. A system of tables, bookshelves and reading lights creates a public space for online works in an abandoned space of Athens. The office area can be used by those who do not use permanent working spaces or by people interested in unplanned or organized meetings for cooperation. Bernard Tschumi characterized the Open Air Office as “the most programmatically inventive” project of the last years in Greece. 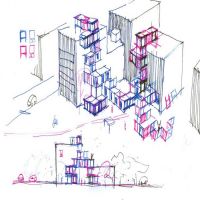 Inspired by Spyridon Kakavas, movable shells can create autonomous neighborhoods- ecosystems within the city that can self - manage natural resources, such as water, ground soil, renewable energy sources and waste. Apart from the direct demand for mass accommodation, the portable shells can cover individual needs of the city. The cubic structures of the system can create a variety of clusters which are to be absorbed by the city, while they can accommodate various uses and functions, and benefit the receiver - the city, contributing to sustainability.