Greek shipowners control more than one-fifth of the world’s entire fleet, and continue expanding: according to the data in the annual report of the Union of Greek Shipowners (UGS) for 2021-2022, Greek shipowners control 5.514 vessels, or 21% of the global fleet in deadweight ton (dwt) terms. The total capacity of the Greek-owned fleet has actually grown 45,8% from 2014, and since the outbreak of the COVID-19 pandemic its capacity has grown by 7,4%. Greek-owned merchant fleet transports cargoes between third countries with more than 98% of its fleet capacity, making it being the world’s largest cross trader.

“In the fluid global environment, shipping has functioned and is functioning as a beacon of stability,” said in her message the president of the Union of Greek Shipowners, Melina Travlos, adding that “Greek shipping, which ranks first in the world with almost 21% of the world’s tonnage and accounts for 59% of the European Union fleet, has a responsibility to undertake and support initiatives in order to inform the wider public about the strategic importance of the industry and the need for its prioritization by the political leaders worldwide”.

Greek shipping is predominantly engaged in bulk/tramp shipping, an entrepreneurial sector that maintains characteristics of perfect competition: a very large number of private, mainly small and medium-sized Enterprises (SMEs), compete globally for business on a daily basis, with flexible and lean administration, transparent access to information, and low entry and exit costs. 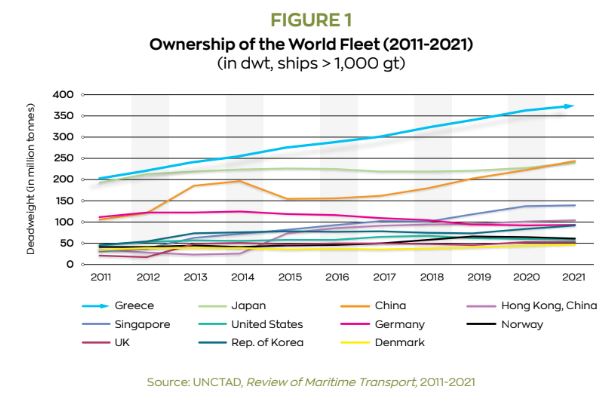 On a national level, Greek shipping remains a strategic advantage, which is particularly important to the country’s economy: Maritime transport contributes more than 3% of gross added value and comes up to almost 7% of gross domestic product (directly and indirectly), offering some 200,000 jobs, per the UGS report. Shipping also offers significant net inflows to the Greek economy: In 2021 inflows in the Greek payments balance from maritime transport not only exceeded the 2019 levels, following the 2020 recession from the pandemic, but were also the highest recorded since 2008, topping 17 billion euros.

Greek shipowners are constantly investing in new, energy efficient ships and in environmentally friendly equipment, with the average age of the Greek-owned fleet (9,99 years), being lower than the global average (10,28 years). Newbuilding orders from Greek shipowners amount to 173 ships (from 104 ships the year before); more than one third of the oil tankers and almost one out of six LNG carriers currently being built in the world will be delivered to Greek shipowners. Greek shipowners have steadily been investing in larger vessels, which also exhibit greater efficiency and environmental gains due to the economies of scale they provide.

At national level, we cooperate with the State to preserve the competitiveness of the Greek-owned fleet [..] The choice of the Greek flag, the modernization of the Greek Ship Register, as well as the choice of shipping companies to be based in Greece, all constitute a common goal of the State and the shipping industry. In addition, it remains our priority to communicate to the younger generation the prospects of choosing seafaring as a profession. To achieve this goal, we work with the responsible academies, organizations and the State, aiming at a reform of the maritime education system.[..] In a demanding environment, Greek-owned shipping stands ready and strong to meet national and international challenges with prudence, realism, vision and knowledge as a global leader in shipping”.

On the occasion of its 100 years anniversary, the UGS commissioned renowened filmmaker Athina Rachel Tsangari to create a film-tribute to the Greek maritime tradition and its legacy.

Big in Japan: 70 Yeas of Greek Shipbuilding Activity in the Land of the Rising Sun

Maritime historian and creator of online maritime museum Greek Shipping Miracle, George M. Foustanos, has written a new book, “Made in Japan,” which was published recently in English. Apart from a study of the vessels built for Greek shipowners in Japanese shipyards, the book showcases how the history of Greek shipping is connected to global history.

The book aims to explore the relatively unknown story of Greek shipowners’ role in the emergence of Japan as a leading shipbuilding power after the end of World War II. The 70 years of Greek shipbuilding activity in Japan begun in 1952, when the first mass shipbuilding order was given to the Hitachi Zosen K.K. of Osaka by the Giannis M. Karras group. Since and up till now, 1,900 ships of Greek interests have been built in the Japanese shipyards, which means one every 13 days on average.

According to Foustanos, the catalyst that led to the explosive post-war development of Japanese shipyards was the introduction of shipbuilding technology from the United States, with particular emphasis on new methods for welding and for the mass production of ships. This know-how has allowed the continuous improvement of construction time in the Japanese shipyards, giving impetus to an industry that, despite its low cost of labor, could not until then compete with European shipyards -mainly because of the high costs involved in transporting raw materials for shipbuilding to Japan. 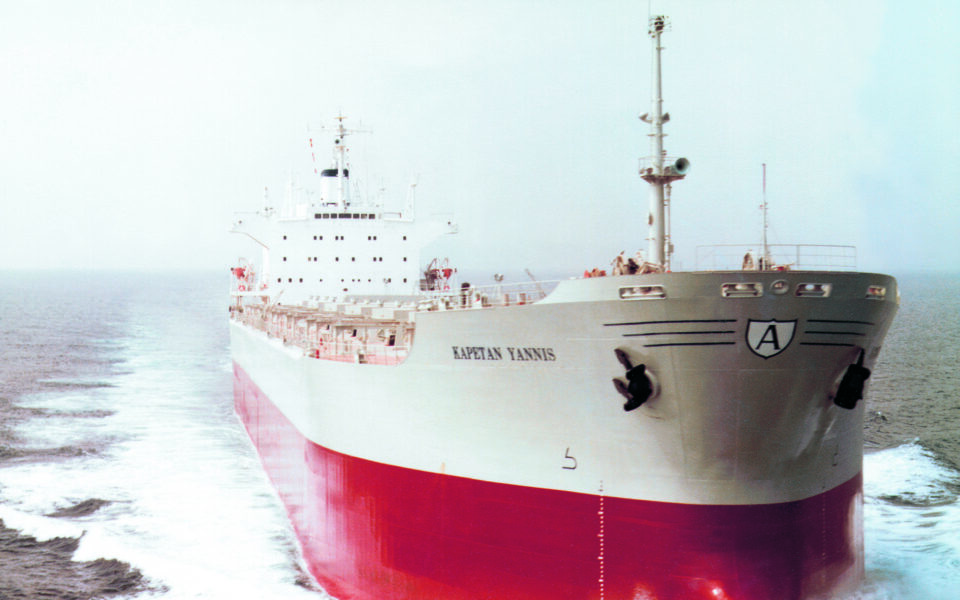 The bulk carrier KAPETAN YANNIS, bulit in 1981 by Nippon Kokan K.K. in Japan for a company under the management of Glafki Shipping Co.S.A. (image by Greek Shipping Miracle)

However, as Foustanos notes, there was still a critical factor to be resolved, which was finding customers to place orders of shipbuilding for export. At this juncture, the role of Greek shipowners proved crucial. With successive orders placed since the end of 1951, mainly by Greek shipowners based in the United States, large tankers war being built in Japan, under Liberian flags and chartered to major US oil companies. In less than five years, and specifically in 1956, thanks to the continuous mass orders of Greek shipowners, Japan surpassed the all-powerful British shipbuilding industry in ship production.

Speaking to ‘Kathimerini’ newspaper, Foustanos emphasized his belief that “shipping is the greatest accomplishment of modern-day Hellenism”, adding that “by becoming involved in maritime trade and transport, the Greeks have managed to peacefully unite with people across the length and breadth of the world. Our ships today are 5,000 sea bound factories competitively transporting international cargoes and sailing to the world’s ports, generating new jobs every day, at no cost to the local economies. Considering that 70% of Earth is sea and we control 20% of maritime transport, this means that we spend every day actively engaged – peacefully and creatively – across the world’s largest area.” 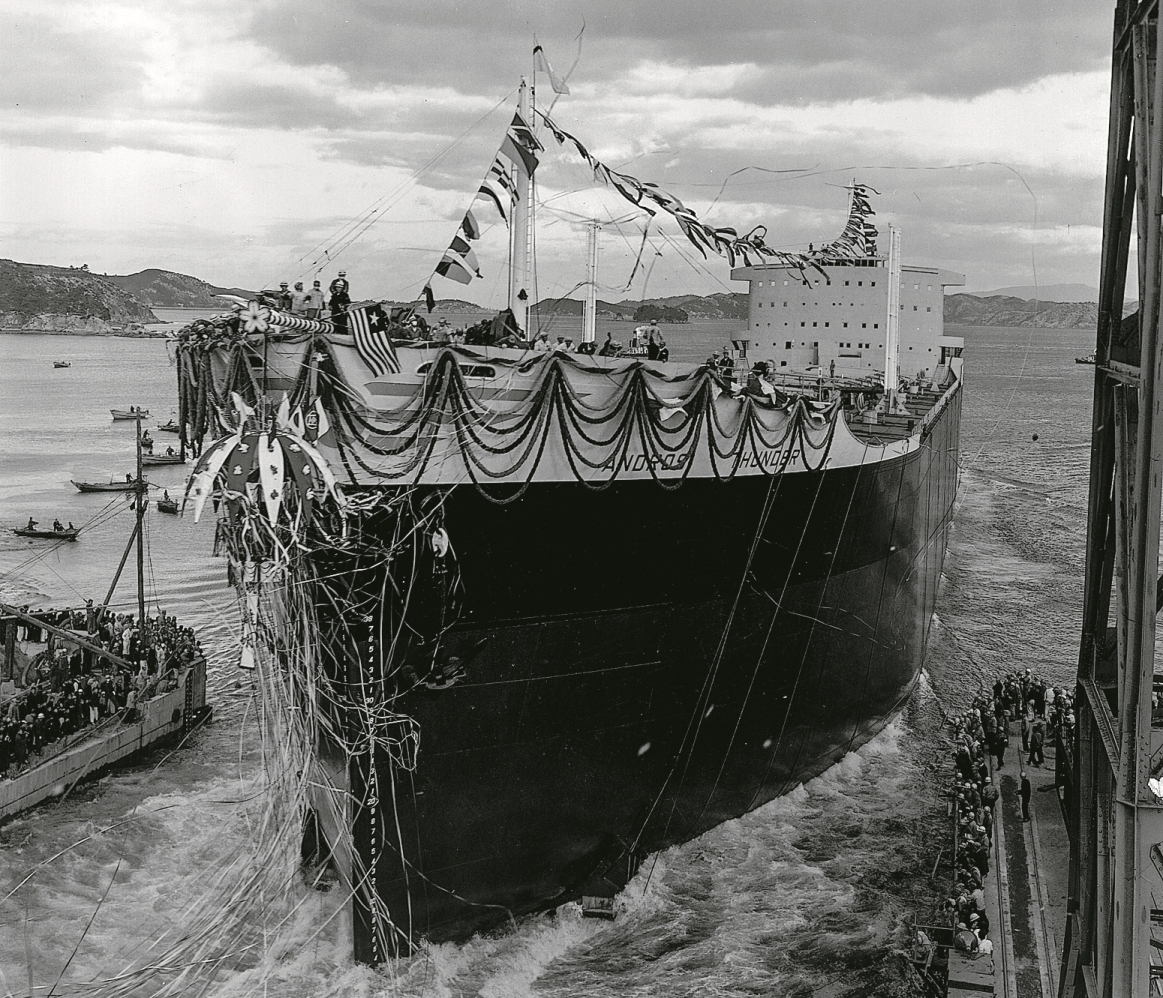 The Andros Thunder ore/oil carrier during its official launch in 1957. Its owners – the sons of Petros J. Goulandris – have had 78 ships built in Japan (image by Kathimerini)
I.L.
fShare
Tweet