Eighty years after the Olympic Flame was lit for the first time in the context of the modern Olympic Games, the Lighting Ceremony of the Olympic Flame for the RIO 2016 Olympic Games will take place in Ancient Olympia on April 21, 2016. Details on the Lighting and Handover Ceremonies were presented by the Hellenic Olympic Committee in a Press Conference held at the Atrium of the Panathenaic Stadium on April 5. “The Lighting of the Flame links the ancient and modern civilizations and presents to every generation the ideals and values that were born in Ancient Greece and then travelled across the whole world, giving physical substance to the meanings of culture and peace”, said HOC President, Spyros Kapralos during the presentation.

The lighting of the flame follows elaborate rituals that are part of an ancient tradition. According to the ritual, the High Priestess proceeds to the lighting at the Temple of Hera (Heraion) which is opposite to the Temple of Zeus, at the archaeological site of Olympia. There, the High Priestess, calls the God of Sun Apollo to light the torch, making a prayer. A procession will then move on to the ancient stadium, where, dressed in archaic costumes, priestesses and male dancers will perform a choreography inspired by Ancient Greece to the sounds of flutes, lyres, bagpipes and percussive instruments. 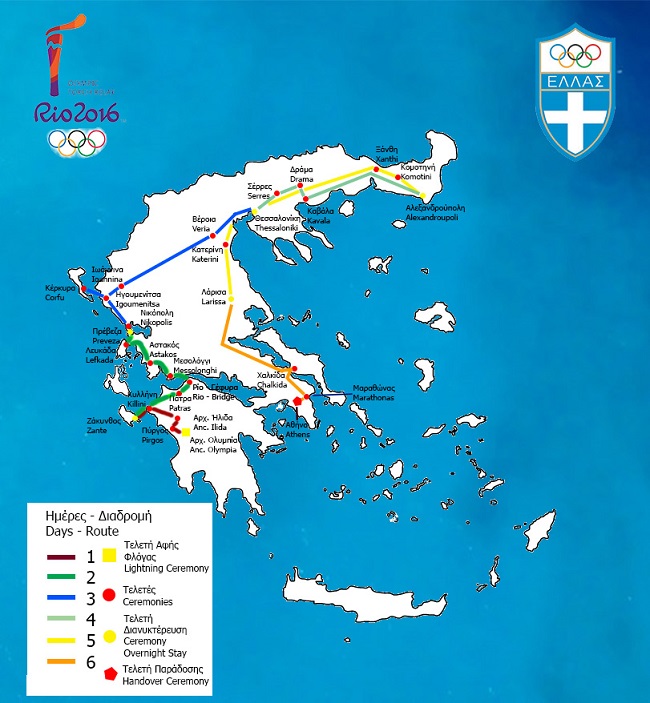 The High Priestess, played by Greek actress Katerina Lehou, will hand the Olympic Flame to the first torchbearer, world champion in artistic gymnastics Lefteris Petrounias, in order for the Flame to travel in Greece before arriving in Athens. The torch will embark on a six-day relay across the majority of Greek territory, including the islands of Zakynthos and Corfu, covering 2,235km and visiting seven archaeological sites. In total, 450 people will carry the torch in the Greek section of the Olympic Torch Relay. One of those will be a so-far unnamed Syrian refugee who has claimed asylum in Greece. At the camp for refugees and migrants in Eleonas, western Athens, the Syrian will bear the torch in the name of all refugees. 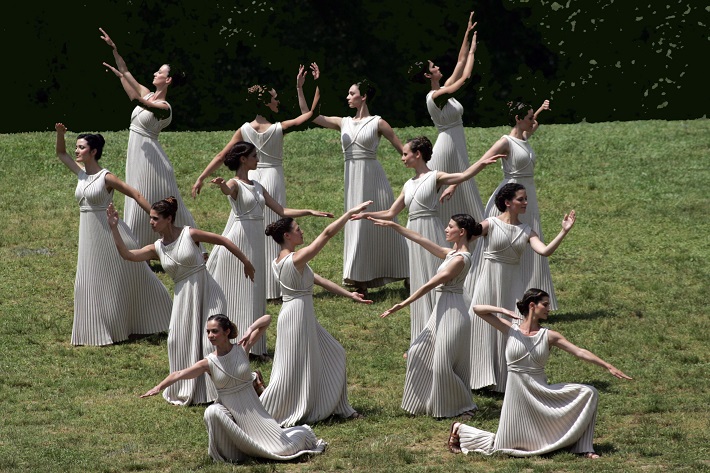 The relay will end on April 27, in a ceremony in the Panathinaiko Stadium, the venue for the historic Athens 1896 Olympic Games, where the Olympic torch will be formally handed over to Brazil. Greek pop star Sakis Rouvas will headline the Handover Ceremony, as he leads the Ellada Boris (i.e. “Greece You Can”) campaign to assist the Greek Olympic squad. After leaving Greece, the torch will go on display at the Olympic Museum in Lausanne, Switzerland, until 2 May when it sets off for Brazil. The Rio 2016 Olympic torch relay will begin its tour of Brazil on 3 May in the capital city, Brasília.

The two ceremonies will feature dancers wearing outfits featuring a novel but also classical design – introducing the colours of the Greek landscape in the internal pleats, light turquoise and light blue in combination with the olive green – courtesy of British-born Greek Cypriot Eleni Kyriacou. They will be choreographed by Artemis Ignatiou, while Fotis Kaymenakis will act as the coordinator and director of both ceremonies.