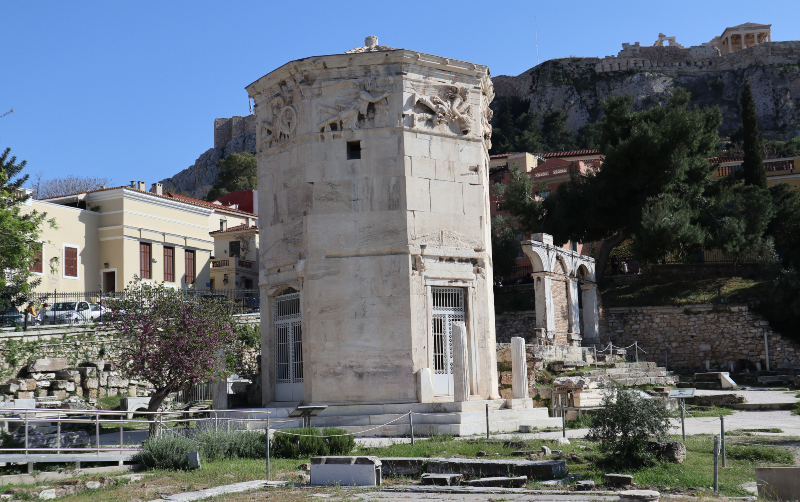 The Tower of the Winds (alternatively, Horologion of Andronikos Kyrrhestes) is located in the Roman Agora of Athens, between the areas of Plaka and Monastiraki, and it is considered the first meteorological station in the world. It is an octagonal structure made of Pentelic marble that used to function as a Horologium or "timepiece".

Unofficially, the monument is also called Aerides, a Greek word for "winds", and the neighbourhood immediately surrounding it is also known by the same name. It is believed to have been erected in 100–50 BC by Andronicus of Cyrrhus (also referred to as Andronicus Cyrrhestes, Greek: Andronikos Kyrrhestes), a Greek astronomer from the ancient town of Cyrrhus in Macedonia, who had already constructed a multifaced sundial in the sanctuary of Poseidon on the Greek island of Tinos.

The tower is about 12 metres tall and eight metres wide, and contains eight planar sundials facing various cardinal points of the compass: each of the building’s eight sides faces a point of the compass and is decorated with a frieze of figures in relief representing the winds that blow from that direction, while below the frieze, on each side facing the sun, are the lines of a sundial. The eight wind deities (Anemoi) represented are Boreas (N), Kaikias (NE), Apeliotes (E), Eurus (SE), Notus (S), Lips (SW), Zephyrus (W), and Skiron (NW). 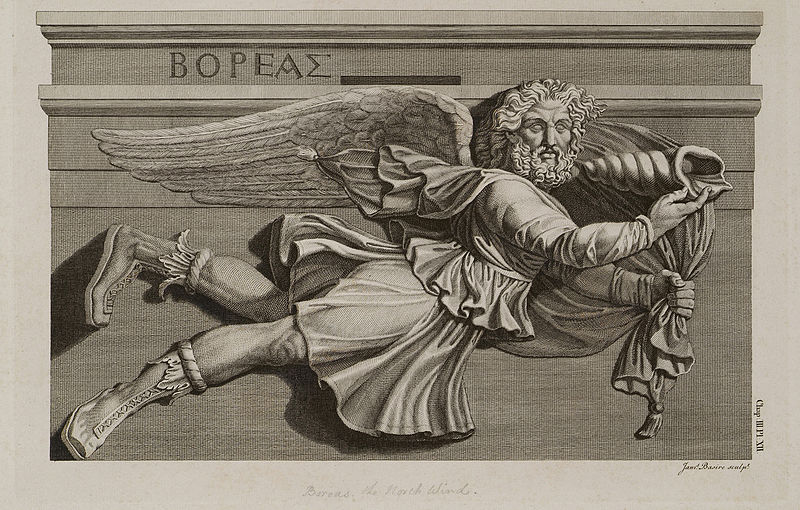 Boreas, the north wind, as depicted on the frieze of the Tower of the Winds (delineated by Stuart James & Revett Nicholas, 1762, via Wikimedia Commons)

The Horologion was surmounted by a weather vane in the form of a bronze Triton holding a rod in his outstretched hand, rotating as the wind changed direction. It is worth noting that the weather vane was independently invented in ancient China and Greece around the same time during the 2nd century BC; the one on top of the Horologion is the oldest weather vane known to have existed in the in the Western world. The tower also contained a water clock (clepsydra) in its interior, to record the time when the sun was not shining.

Recent research has demonstrated that the considerable height of the tower served the purpose of placing the sundials and the wind-vane at a height so that they were visible from the Agora, effectively making it an early example of a clock tower. The tower's columns bore capitals of a design that became known as "Tower of the Winds Corinthian", although they lack the volutes ordinarily found in Corinthian capitals. Its interior, however, is built according to the Doric order. 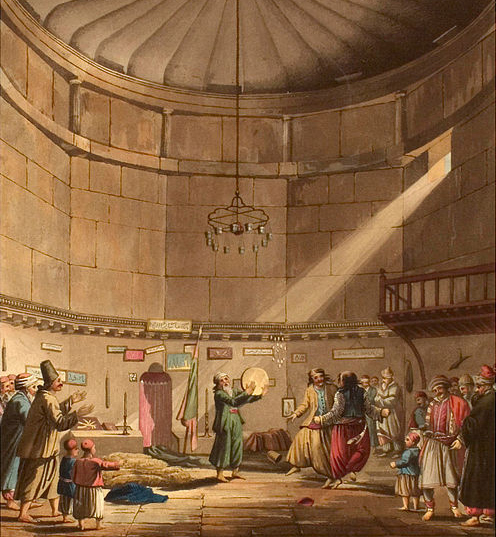 Dance of the Dervishes at the Tower of the Winds, Edward Dodwell, 1821 (via Wikimedia Commons)

In early Christian times, the building was used as the bell-tower of a Byzantine church. Under Ottoman rule it became a tekke and was used by whirling dervishes. At that time it was buried up to half its height, and traces of this can be observed in the interior, where Turkish inscriptions may be found on the walls. It was fully excavated in the 19th century by the Archaeological Society at Athens. Recently, conservation works were undertaken by the Ephorate of Antiquities of Athens, in order to restore the monument, and it has been open to the public since 2016.

Several buildings have been influenced by the design of the Towers of the Winds, especially during the Greek Revival, including the 15th-century Torre del Marzocco in Livorno, the 18th-century Tower of the Winds on top of the Radcliffe Observatory in Oxford, the Carnaby Temple near Carnaby, East Riding of Yorkshire, built in 1770 and the tower on St Luke's Church, West Norwood, in London.

Read also via Greek News Agenda: Unraveling the Mysteries of the “Oldest Computer” of Mankind ; Pavlopetri: The Oldest Submerged City in the World; The ancient city of Oeniadae; The unknown Mycenaean acropolis of Glas