Exhibition "1821 Before and After" 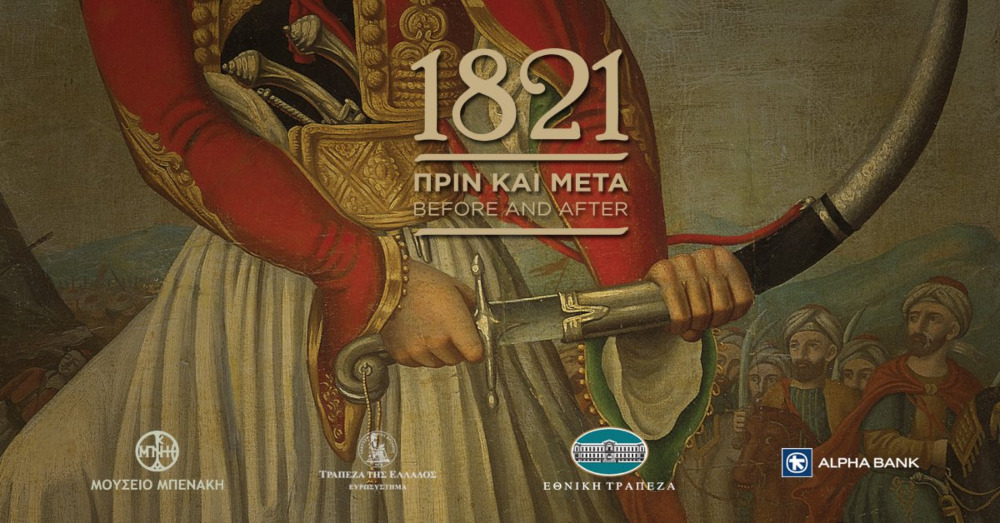 The Benaki Museum, in cooperation with the Bank of Greece, the National Bank of Greece and Alpha Bank, presents a major anniversary exhibition to celebrate the Bicentenary of the Greek War of Independence, under the tile "1821 Before and After".

As indicated by its title, the exhibition aims to provide an overview of not just the history of the Greek struggle of 1821-1828, but also the key events which led up to Greek Revolution, and the evolution of the newly established Modern Greek state.

The exhibition is part of the National Programme of Bicentennial Celebrations coordinated by the "Greece 2021" Committee, and it is organised Under the Patronage of H.E. the President of the Hellenic Republic Ms. Katerina Sakellaropoulou.

More than 100 years of history (1770-1870) will unfold through 1,200 objects, exhibited over 2,500 square metres. The exhibition would normally be officially launched in March, but has been delayed due to the restrictive measures put in place against the spread of Covid-19. However, a live streaming presentation has taken place, providing a preview of the exhibition; the broadcast has been recorded and uploaded online (in Greek with English subtitltes).

This fascinating process of national emancipation, beginning before the 1770 ‘Orlov Revolt’ and concluding in the 1880s, will be narrated in ‘1821 before and after’. The exhibition, arranged in three parts and featuring some 1,200 exhibits, will unfold more than 100 years of history across 3,500 square metres, until November 2021. This will be the first exhibition on modern Greek history of such scale and scope internationally.

The narrative will deploy exhibits held in the collections of the three banks and the Benaki Museum, itself a rich repository created on bonds of trust with the families of those who held centre-stage in the Greek Revolution. Loans have also been secured from important museums and private collections in Greece, France and the United Kingdom.

Paintings, sculpture, personal items belonging to prominent figures of the Greek struggle, historical documents and heirlooms will be arranged into three sections which will bring to life the progress towards a national revolution (Section I: 1770–1821), the events of the War of Independence and its conclusion (Section II: 1821–1831), as well as the creation of the modern Greek state and its development and operation during its first half-century (Section III: 1831–1870).

Through rare works of art and special testimonies from each era, the three parts of the exhibition offer a fascinating journey of history and art, a journey that in each step reveals why this adventurous century remains so deeply engaging, even in the 21st century.

The exhibition catalogue, titled 1821 Before and After: Greeks and Greece, a monumental publication of 1218, can be pro-ordered on the museum’s website.

Read also via Greek News Agenda: “Greece 2021” | The celebrations for the 200th anniversary of the country’s Independence War; Antiquarianism and Philhellenism | An emblematic exhibition to celebrate the Greek War of Independence bicentennial; 2021 Bicentennial Celebrations by Foreign Embassies and Institutions