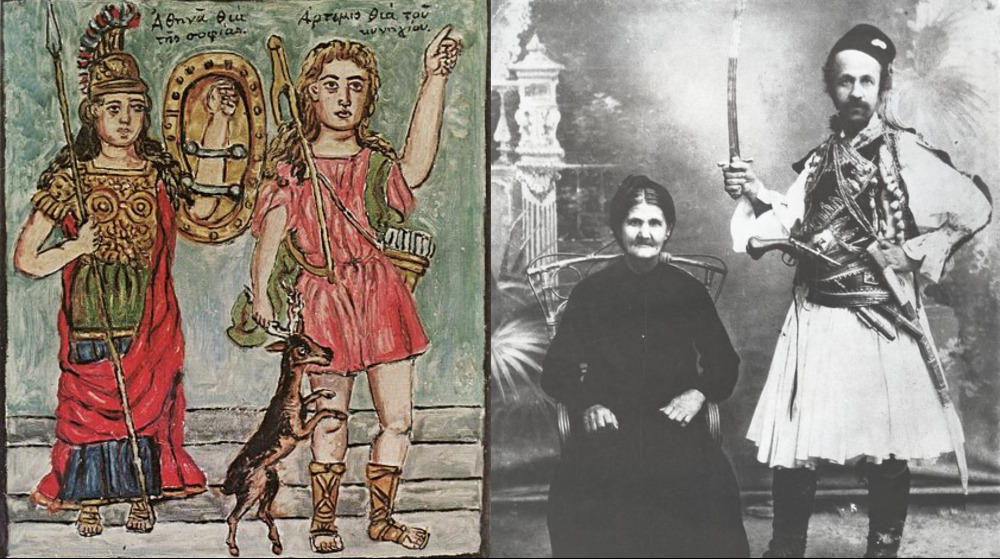 When the so-called Generation of the 1930s, the predominant modernist movements in Greece, established the term and notion of "Greekness", they associated it with various aspects of what they perceived as a genuine form of national identity. In this context, they rediscovered and reevaluated the art of Theophilos; the previously underrated folk artist has since been regarded as the quintessence of Greekness, although he received little recognition in his lifetime.

The artist was born Theophilos Kefalas around 1870 in Varia, a village close to Mytilene on the island of Lesbos. His father was a cobbler while his mother, Penelope Hatzimihail, was the daughter of an icon painter. Since an early age, he showed interest in painting, and acquired some basic skills thanks to his grandfather. As a young boy, he was often ridiculed for his stutter and his choice to wear the fustanella, the traditional Greek kilt that was however not used by locals in the region. 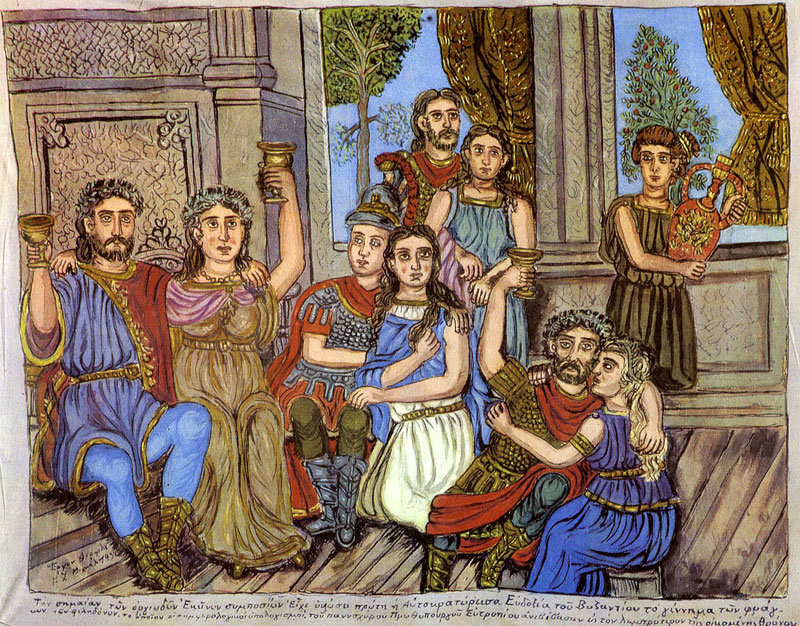 As a teenager, he left for Smyrna, a major city with a vibrant Greek community at the time, and worked as a guard at the Greek consulate. In 1897, he settled in the town of Volos in the Greek mainland, and worked as a freelance painter, creating murals in inns, houses and shops in various villages of the area; he signed almost all his works using his mother’s last name, and is hence always referred to as Theophilos Hatzimihail of just Theophilos. He would also sometimes stage and star in folk plays, using schoolchildren in supporting roles.

The landowner Giannis Kontos acted as his patron at the time, and commissioned him several works; today, Kontos’s house in Volos has been transformed into a museum for Theophilos. He was however often goaded and mocked for his unconventional ways. In 1927, disappointed by the attitude of the locals, he returned permanently to his native island, and continued his work as a freelance painter, often creating murals in exchange for a meal.

Around 1928, Theophilos met Stratis Eleftheriadis (better known by his nom de plume Tériade), a native of Mytilene who had distinguished himself as a publisher and art critic in Paris. Tériade bought some of his works and commissioned him to paint many more, with the aim of having them exhibited in Paris as representative of Greek folk art. During that period Theophilos created more than 120 paintings, which would eventually be exhibited in 1936, earning great acclaim. However, the artist himself never witnessed this, as he had died in early 1934 in Mytilene, probably from food poisoning.

In 1961, a large exposition of his works was hosted at the Louvre to universal acclaim. In 1964, the Theophilos Museum was established in Theophilos’s native village; the building, along with the 86 works exhibited in the four rooms of the museum, were donated by Tériade.

Theophilos' paintings fall into two categories: those inspired by life in nature and those that draw from themes of Greek mythology, history and religion. Besides numerous walls and textiles, the artist had worked on all kinds of surfaces, such as cardboard boxes, wooden planks, metal container etc.

His works are believed to perfectly capture the light and sense of typical Greek landscapes. Influences from Byzantine iconography are evident in his works, especially in the way the female figures are portrayed. His naïve-primitive technique displays obvious technical weaknesses, but this is made up for by his fresh approach, his genuine "Greekness", and the use of rich colour tones. He is now considered to be the foremost Greek folk painter.

Recently, as part of the celebrations for the bicentenary of the Greek War of Independence, the Committee "Greece 2021" launched a Numismatic Programme, in collaboration with the National Mint (IETA) of the Bank of Greece. The programme was inaugurated with the issuance of the "Forerunner", a commemorative medal depicting Greece reborn, a painting created by Theophilos in 1911; in it, the personification of wounded Greece is helped up from the ground by the 18th century scholars and writers Adamantios Korais and Rigas Ferraios.

N.M. (Based on the original article from Grèce Hebdo; Intro image: Athena and Artemis, c. 1927-34, National Gallery, Athens [via Wikimedia Commons] and photo portrait of Theophilos with his mother c. 1900)