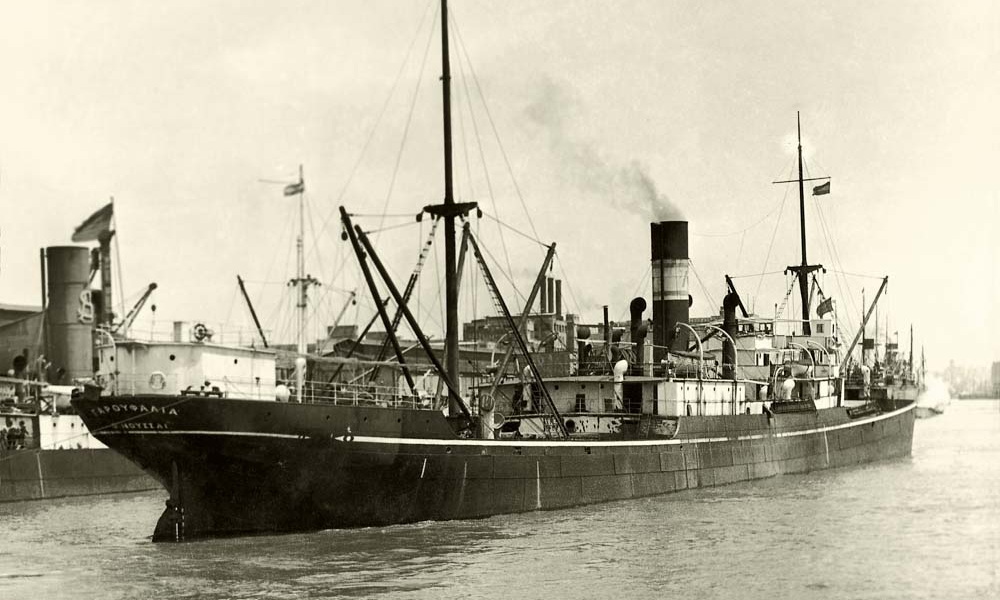 This volume, a part of Brill’s Studies in Maritime History, presents Greek Maritime History and unravels the historical trajectory of a maritime nation par excellence in the Eastern Mediterranean. At the core of the book lies the rise of the Greek merchant fleet and its transformation from a peripheral to an international carrier. Following the evolution of Greek shipping for more than three centuries (17th-20th century), the book traces a maritime nation in its making and provides proof of a different, yet successful pattern of maritime development compared to other European maritime nations.

Greek-owned shipping holds a leading position in global shipping in the world’s dry bulk fleet and the world’s tanker fleet. The extraordinary course of the Greek shipping industry worldwide has attracted a great deal of public attention, especially in contrast to the small size of the Greek national economy. The contradiction of a nation that is small in spatial terms, yet has a big impact in the maritime realm, as has also been the case for Norway, has led to the ‘miracle of Greek shipping’ narrative. Due to the lack of a concrete scientific approach, the analysis of this impressive growth of the Greek shipping industry has relied mostly on a variety of traditional, if not metaphysical, interpretations such as the charisma of individual entrepreneurs or a genetic predisposition of Greeks towards the sea and the maritime industry that is still resonant to the present day.

The introduction of Greek Maritime History to academia in the 1990s counterposed a coherent scientific approach for the study of the historical evolution of the shipping industry. Over the last decades, Greek Maritime History has carved an impressive course and is in its current state, mature and well equipped enough to encompass the multilevel human interaction with the sea and contribute to the international agenda, methodology and research. The chapters of this volume, edited by Katerina Galani and Alexandra Papadopoulou, reflect the multidimensional, comparative, interdisciplinary and intertemporal capacity of Greek maritime historiography. The scope spans from the 16nth to the 20th century, as well as from the Eastern Mediterranean and the Black Sea to the Atlantic and the Indian Ocean. Furthermore, it covers a wide range of topics, from business history, technology and innovation to colonial and diaspora studies, naval history, fishing, maritime communities, shipping and trade. 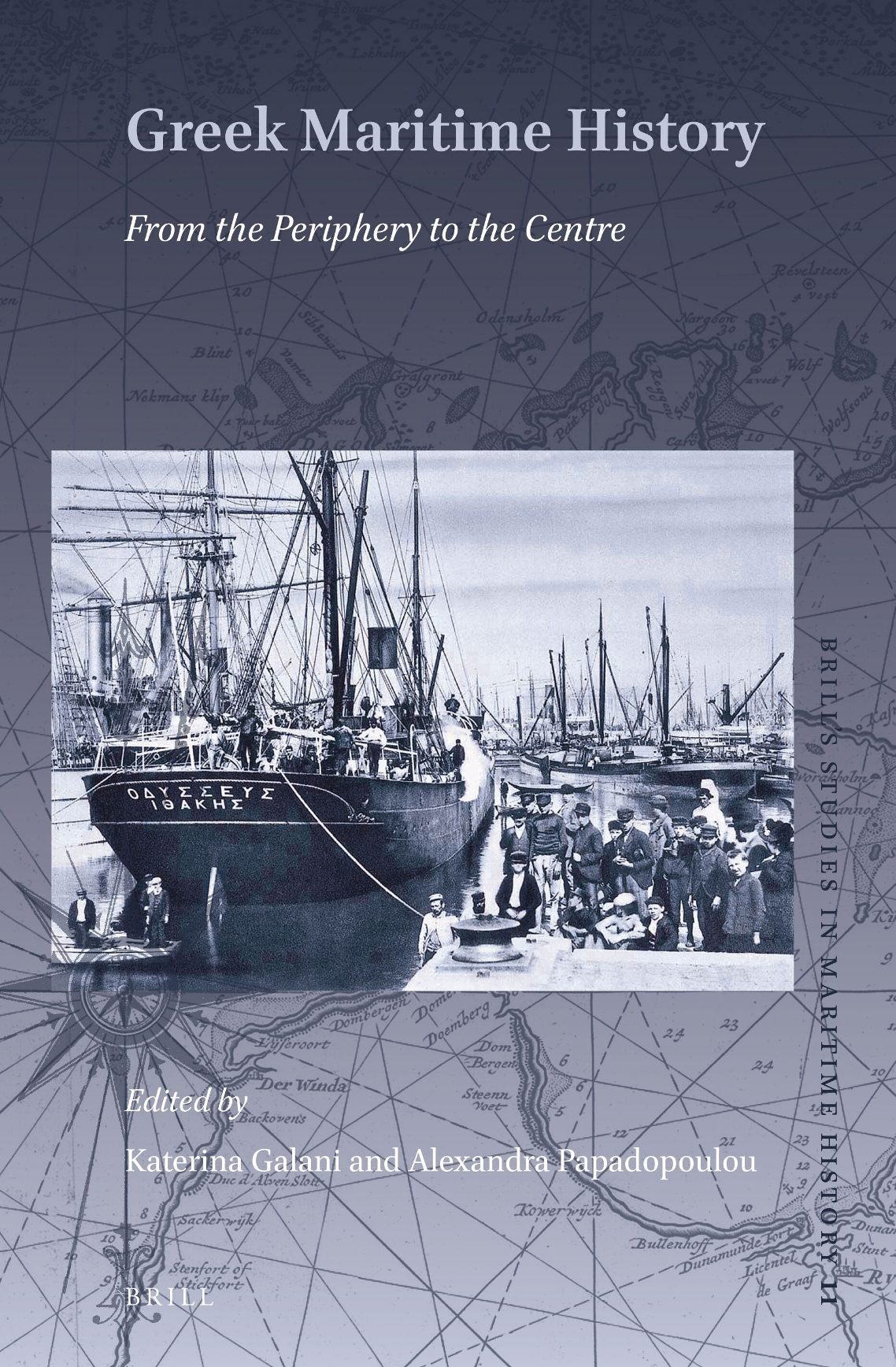 A central analytical tool used in the volume is the social and economic networks that organized and coordinated trade and shipping through the formation of local, peripheral and international transport systems. Networks lie at the foundations of the business organisation of shipping and trade. Furthermore, networks have revealed the role of the small maritime communities of the Aegean and the Ionian seas that emerged during the sailing-ship era, in the making of Greek shipping. Beyond the history of major ports, the study of seafaring communities has been critical in deepening our understanding of the ‘geography’ and roots of powerful European shipping. Furthermore, it opens up new potential for interregional and transnational comparisons and brings about new questions on the existence of a common pattern of maritime development among Europe’s seas (the Mediterranean, North Sea, Baltic, and so on).

The relation between modern shipping and globalization is another contributing factor to the growth of Greek shipping. The international expansion of commercial and shipping networks was a crucial factor in the emergence of shipping as a global business, and in the role of sea transport in global interconnectedness. The consolidation and connectivity of local, peripheral and international transport networks that extended beyond the maritime region of the Eastern Mediterranean and the Black and Azov seas towards Western Europe and the Atlantic Ocean has been crucial in the rise of modern Greek shipping. The interplay between shipping and globalisation is reflected in recent studies conducted on the level of the markets, by probing maritime regions and their share of the global maritime industry, as well as on the level of the firms, mostly of diaspora entrepreneurs who have acted as architects of transnational networks. 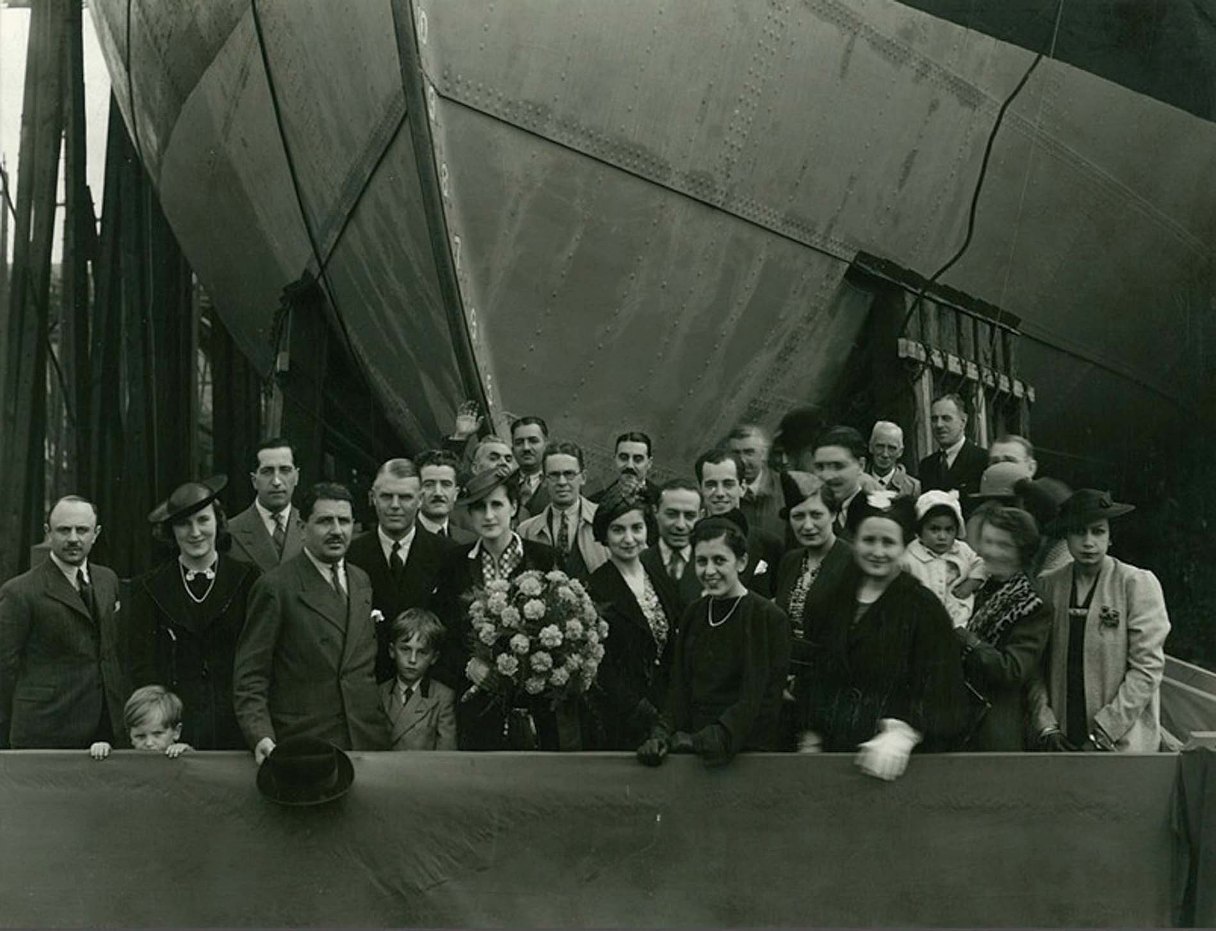 Naming ceremony for M/T Sibella in 1952

The chapters adopt a multidimensional and interdisciplinary approach – spanning from shipping and trade to piracy, technology, human resources and entrepreneurship – and reflect the main directions of Greek maritime historiography over the last thirty years.

Greek Maritime History: Navigating Greek Historiography in Domestic and International Waters: Gelina Harlaftis deservingly holds the first main chapter in this volume. In a dense description of the evolution of Maritime Studies in Greece and its current situation in research and teaching, she encapsulated the central methodological issues of the last decades of research and the consolidation of models applied to conceptualise the history of Greek shipping. She provides a synopsis of the main research findings, which have challenged long-standing impressions in the existing historiography, relating and justifying the growth of Greek shipping in the eighteenth century.

From Venetian to Ionian Protectionism|Research in the Early Modern Maritime History of the Greek Subjects of Venice: Gerassimos Pagratis, a medievalist and early modern historian of the Venetian Republic, presents recent findings on Greek shipping in the Ionian Sea, under the Venetian rule and the Septinsular Republic, while he offers a critical survey of the early modern historiography, pointing out the prevailing topics and approaches, as well as their strengths and limitations.

Caught Between Empires|Agency, Neutrality and a Middleman Minority: Katerina Galani addresses one of the key comparative advantages of the Greeks in the Mediterranean of the early modern period: their role as intermediaries in the empires. Finding their way through the cracks of the system, they became the principal sea carriers of the Ottoman Empire in the eighteenth century, and acted as economic brokers – that is, as agents and partners – for Western traders operating in the Levant.

Piracy in the Aegean|Aspects and Contradictions of Stereotypes: Dimitris Dimitropoulos raises the issue of the perils of the sea in the seventeenth and eighteenth centuries through the records of the Aegean Islands, with an eye to demographic, social and economic changes. Drawing upon contemporary sources and the existing literature, he challenges the long-standing negative assertions on piracy and corsairing and proposes a wider interpretation that encompasses the different nuances of the terms and practices across time and space. 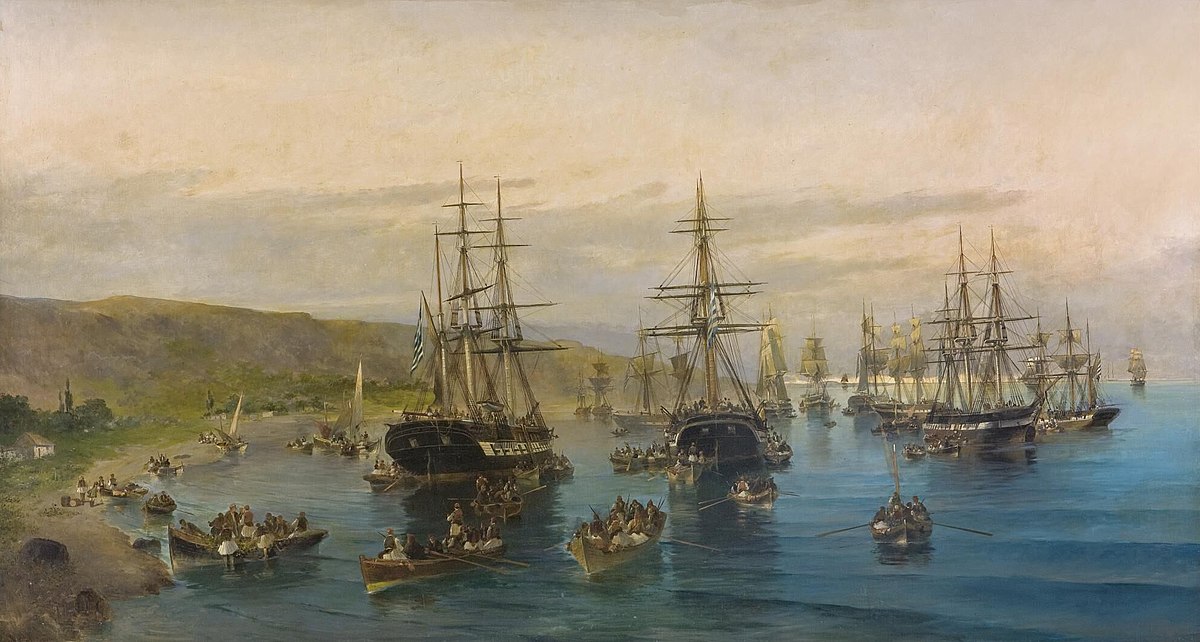 "The arrival of Karaiskakis in Phalero. Oil on canvas", Konstantinos Volanakis (1837-1907)

Three chapter in this volume form a distinct thematic unit and are dedicated to the study of the Black Sea and the Azov Sea, mirroring the growing interest of Greek historians in this maritime region over the last decades. The rise of modern Greek shipping since the late eighteenth century has been intertwined with the development of the Black Sea as an international market. Therefore, the Black Sea economy has been placed at the centre of historical research by examining its position and relations with international trade, the rise of diaspora merchant communities and their role as conduits of trade and shipping to the global economy, the economic development of port cities and the formation of transport networks.

The Black Sea in the Global Economy of the Nineteenth Century|Introducing the Black Sea Historical Statistics: The chapter by Alexandra Papadopoulou and Socrates Petmezas presents the series of the ‘Black Sea Historical Statistics’ (BSHS) that span from 1812 to 1914. BSHS was created as part of a larger interdisciplinary project and focuses mostly on providing hard evidence on the development of trade and shipping from and to the Black Sea for over a century.

The Creation of the Main Export Port of Crimea: Port Policy, Traffic, Infrastructure in the Port of Theodosia: Anna Sydorenko examines the development of port systems on the south coast and their connection with the hinterland and foreland during the integration of the Black Sea market in the global economy. Through the case study of Theodosia in the Crimea, the chapter follows the construction and operation of a port that served grain exports and probes the political, economic and geo-political factors that promoted its development.

Beyond the Mediterranean: Greek Family Business and the Familiarity of the Black and Azov Seas Maritime Space: The importance of the Black Sea in the development of Greek shipping is further analysed by Evrydiki Sifneos, an esteemed scholar who sadly passed away during the preparation of this book. Sifneos had worked extensively on the multifaceted history of the Black Sea, and here she examines the city of Taganrog in the Azov Sea, which hosted a sizeable maritime community of the Greek diaspora.

The Advent of Steam Navigation in Greece in the Nineteenth Century: Apostolos Delis focuses on the early stages of steam shipping in Greece through the records of the first Hellenic Steam Navigation Company. During thirty years of service, the chapter argues, the Company contributed to the diffusion of innovation in iron shipbuilding and marine engineering in Greece. At the same time, it introduced passenger shipping, the modernisation of maritime communications and the geographical cohesion of the Greek state and its connection to international markets.

The Introduction of Maritime Technology in Greek Fisheries: Diving Suites in Sponge Fishing in the Aegean: Evdokia Olympitou’s chapter describes the adoption of new techniques in sponge fishing in the islands of the Aegean. The author examines the introduction and the establishment of a mechanical diving method, the so-called ‘skafandro’ that intensified production while at the same time evoking a range of social and economic changes in the sponge-diving populations of the Aegean.

Business Groups’ Diversification Strategy: The Case of Ralli Bros Diversifying in Shipping: Focusing on a case study from the Greek diaspora, Katerina Vourkatioti investigates the evolution of family business into international business groups. Vourkatioti, through the rich and understudied business archive of the Ralli Bros, probes one of the most prominent families of the Greek diaspora, who flourished within the context of the British Empire in the twentieth century, analyzing thier strategy of diversification from trade to shipping as a means of expansion and survival of the business group.

Greek Shipping in the Twentieth Century: The Human Resources: The competitive advantage of Greek shipping in the twentieth century is investigated by Ioannis Theotokas through the factor of human resources. Entrepreneurs who engage in the shipping market, seafarers and crews and shipping officers ashore create a critical resource for Greek shipping, with a cost-effective operation and management of the fleet that overcomes disadvantages related to capital shortage. 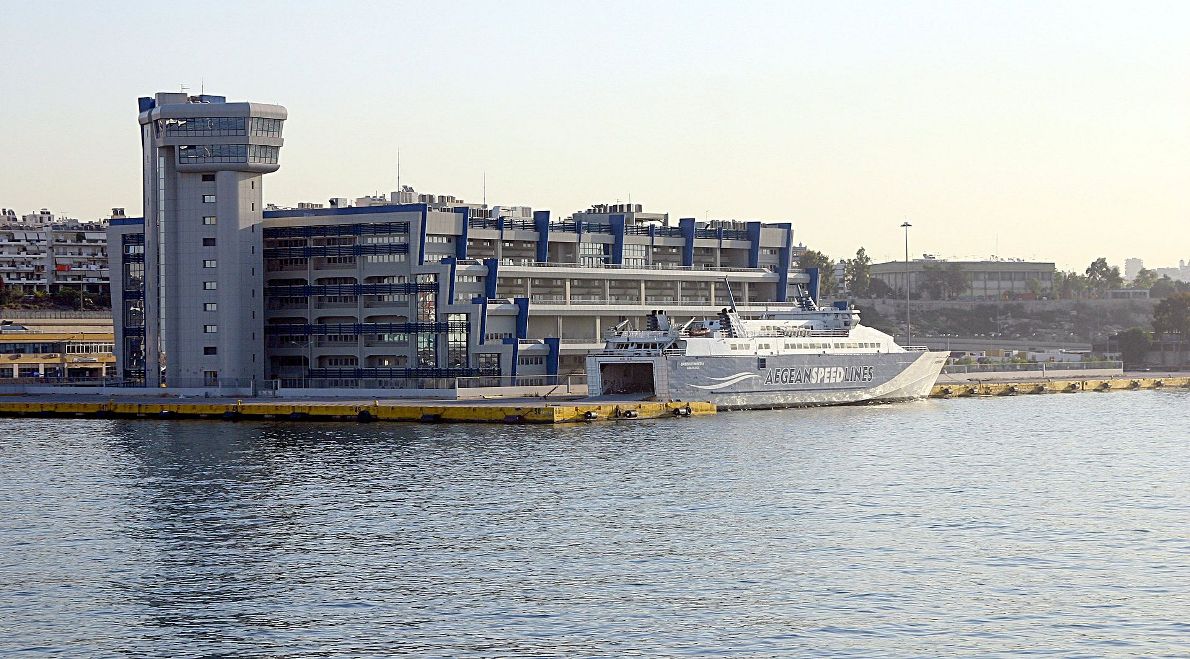 The Ministry of Shipping at the Port of Piraeus, photo by Leonid Mamchenkov Ⓒ Wikimedia Commons
I.L.
fShare
Tweet