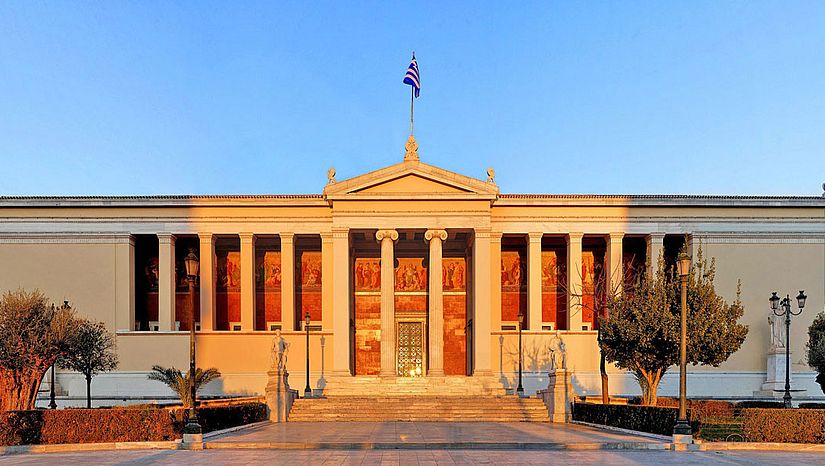 The experiment of English-taught Bachelor programs, which started three years ago in Greek Universities, is proving to be successful. Three programs have already been approved and are operating: a BA in the Archaeology, History, and Literature of Ancient Greece from the Philosophy School of National and Kapodistrian University of Athens, a Medical Degree from the Aristotle University of Thessaloniki and a Medical Degree from the National and Kapodistrian University of Athens, and according to Kathimerini, another 15 proposals for English-taught Bachelors’ degrees are in the pipeline for 2023.

"The growth of English-taught undergraduate degrees will only bring positive things to Greek Higher Education Institutions from an academic point of view," according to Dimitris Plantzos, professor at the Philosophy School of the University of Athens. Katerina Karvouni, professor at the same school, says that “already, working with the English language has shifted the perspective of the teachers on organizing and teaching the courses”, adding that “the program’s success has posed academic challenges, while it has also changed the way the administration operates.” The same is happening in the English-taught Medical Degree from the Aristotle University of Thessaloniki, which is entering its second year of operation. At Athens Medicine, the corresponding program starts this year with 40 students. Of course, the financial benefits are not to be neglected. The programs have tuition fees: 6.000 Euros per year for the Philosophical School and 13.000 for the Medicine School of the National and Kapodistiran University of Athens and 12,000 for the Medical School of the Aristotle University of Thessaloniki.

Amphitheatre at the Medical School of the Aristotle University of Thessaloniki

BA on Archaeology, History and Literature of ancient Greece from the University of Athens

"The foreign students who come to study in Greece make up a palimpsest. Young people from different cultures come into contact with Greek students, get to know each other, exchange experiences, share their student years, create bonds", observes Eleni Karamalegkou, professor Emeritus of the Philosophy School of the University of Athens, speaking to Kathimerini about the total of 64 students of the BA on Archaeology, History and Literature of ancient Greece, the first English-taught Bachelor’s degree established in Greece. The program begun in 2020-21 and this year will be in its third year of operation. In these three years, 64 students (another 25 from China are expected in the spring) from 21 countries –among them USA, Canada, China, Egypt, Iran, South Africa, Philippines, Portugal, Italy, El Salvador, the United Arab Emirates, Albania- have chosen the program.

"These young people’s choice to study Greek antiquity is very special; they did it because they love it and not because they are just looking for studies with good professional prospects. Their interest challenges us. Until now, when we think of classical studies, the mind goes to Greece as a base, but scientifically the mind goes to foreign universities, e.g. in Germany", says professor Karamalegkou. "Greece has ancient monuments as sources of study and knowledge. With the program, we seek to make our country also known as a destination for of international students".

In statements to Kathimerini, the rector of Aristotle University of Thessaloniki (AUTH), Nikos Papaioannou expressed his excitement when, in 2021, the institution's Medicine Faculty officially welcomed the first 60 foreign students to its English-taught Medical Degree program. "The English-taught program is based on the recently reformed Greek-taught undergraduate program of Medicine, on the tradition and experience of 78 years of uninterrupted operation of the Medical School, as well as on the high academic level of its professors in teaching, research and clinical work," professor Papaioannou said. Over 1200 applications had been submitted to for the first year of the English-taught Medical Degree of the Aristotle University of Thessaloniki, by students from more than 20 different countries: Egypt, Albania, Australia, Afghanistan, Vietnam, France, Germany, Denmark, Britain, USA, Jordan, China, Cyprus, Lebanon, New Zealand, South Africa, Netherlands, Sweden, Sri Lanka, Turkey.

The number of admitted students is set at sixty students per year, and the total number is expected to reach three hundred and sixty students, when all six years of study, which is the total duration of the program, are in operation. Entrants will be selected through online written exams and an individual interview. In order to obtain their degree in Medicine, students will have to attend and be successfully examined in 83 courses (76 courses up to in the 10th semester and 7 clinical exercises in the 11th and 12th semesters), accumulating a total of 360 European Credit Transfer System (ETSC) credits. "The establishment of the first foreign language undergraduate study program in the Department of Medicine is a milestone in the history of our university and a flagship initiative of our extroverted strategy," said in declarations at the Athens-Macedonian News Agency professor Papaioannou, expressing his certainty that the program that has been prepared will offer foreign students "education of high level and requirements" and will contribute "to the promotion of the city and the country as an education center of wider area of ​​South-Eastern Europe".

The latest undergraduate English-taught program to be added to the list is the Medical Degree from the National and Kapodistrian University of Athens, which begun this September. The medical program at the University of Athens, just like the one at Thessaloniki was certified as excellent by the National Authority for Higher Education (ETHAAE). "This is a very important moment for our institution, which first started foreign language programs in Greece with the bachelor of the School of Philosophy, which starts its third year of operation this year. Today, our School of Medicine is taking the next step", the rector of the University of Athens, director of the foreign language program and professor of Medicine, Thanos Dimopoulos, told Kathimerini, stressing that "our goal is for the University of Athens to always be a hub of excellence and extroversion".

Study in Greece Project and Portal

Apart from these three English-taught Bachelor’s degrees, there are more than 120 Master’s degrees taught in English in Greek Universities. At the forefront of Greek Academia’s renaissance effort is "Study in Greece" (SiG) the official project of the Greek state for the internationalization and extroversion of Greek Higher Education Institutions. The project’s portal [https://studyingreece.edu.gr/] hosts and maintains all of the pertinent information related to the Greek academic world. Presenting and promoting the wide variety of English (and other languages)-taught programs offered by the Greek Universities, SiG constitutes the official bridge between the Greek and the international academic community. Speaking to the Athenian-Macedonian News Agency, Christos Michalakelis, associate professor in informatics at Harokopio University and scientific manager of the "Study in Greece" project, spoke about how Greek universities a entering a new era.

"The existing legal and institutional framework enables us to develop undergraduate and postgraduate study programs for international students in a English; Greece can now attract foreign students and compete with the countries that were traditionally considered study destinations," said professor Michalakelis. “Henceforth Greek universities occupy an important place on the world academic map”, he added.  Through these English-taught undergraduate and postgraduate degrees, Greek universities are promoted internationally, while Greek academics and scientists network with their colleagues from abroad. "This means that Greek students also benefit because they socialize with their foreign colleagues, which opens up their intellectual horizons”, the professor emphasized.

"Study in Greece" has developed information systems and digital tools the visitors of the site can use to find information regarding study programs, summer schools, educational and cultural activities, events and international awards relating to Greek Universities. On such tool is MatSiG, a digital platform that purports to effectively map the academic activities offered by Greek Universities, Educational and Cultural Institutions, as well as the sharing of information between those and any other interested parties. Users may browse through a range of activities and programs, such as Bachelors, Masters, Summer and Winter Schools, Internships, Conferences etc, to find those that meet their needs. Another exiting tool is the Virtual Education Fair, basically an online event where prospective students can interact with universities to see what the right fit is for them, learn  more about Greek higher education and, chat with representatives of all Greek universities to get more information about the wide variety of international study programs, admission requirements, scholarship opportunities, as well as everyday life in Greece. The "Study in Greece" portal is available in Greek and six other languages ​​: English, French, Chinese, Arabic, Russian and Hindiand ιτ also provides practical information and advice for academic and daily life in Greece.

According to professor Michalakelis, the 'Study in Greece' project "begun in 2015, but since 2021 - with the support of the Ministry of Education and the funding we received, we have managed to represent all Greek universities in international exhibitions, with the latest participation recently in USA. Through this process we realized that our job is very easy after all: we are promoting an already a strong nation brand and what we are simply saying is that Greece, in addition other things it is known for, like tourism, also offers quality University education. At the same time we are showcasing the education possibilities available in Greece. Furthermore, we are in cooperation with the Greek and foreign diplomatic authorities, embassies and consulates of foreign countries in Greece, but also mainly with the Greek diplomats, ambassadors and consuls abroad, who offer us great help and support in what we do", professor Michalakelis concluded.

I.L. with infromation from Kathimerini and the Athenian-Macedonian News Agency, C.