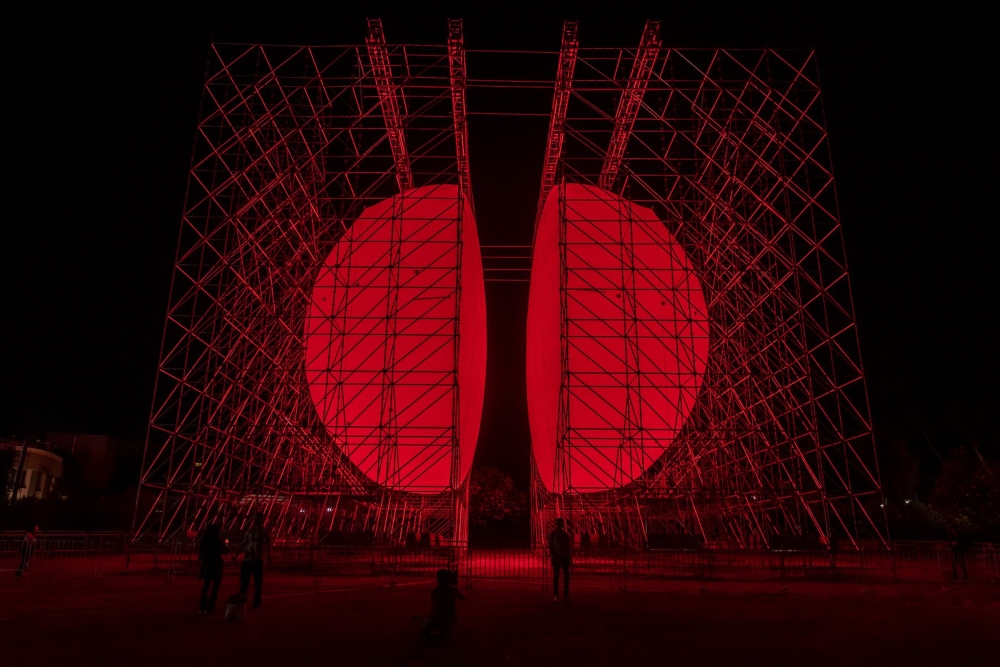 "Plásmata: Bodies, Dreams, and Data", the largest open-air digital art exhibition in Europe, is hosted at the Pedion tou Areos public park, in the heart of Athens, until 10 July 2022.

The exhibition is commissioned and produced by the Οnassis Cultural Centre Athens (Stegi, the Athens chapter of the Onassis Foundation) and curated by Irini Mirena Papadimitriou, Creative Director of Future Everything, a Manchester-based award-winning innovation lab and cultural organisation, with the support of Region of Attica. Admission is free.

The exhibition unfolds as a curated journey through the park, featuring 25 new large-scale works by a range of international artists, "exploring the body - individual, collective, human, non-human and planetary - and how technology and technologically constructed worlds are shaping, affecting and impacting our bodies, identities and place".

Carrying the tagline "Listen to your body. Believe in your dreams. Watch your data.", the exhibitions poses questions regarding themes such as the perception of gender within a digital setting, self-image in the reflections we ourselves create, the concept of disability and the way "we use our digital ‘hands’ to create different types of creatures and identities, to fabricate and refabricate ourselves". 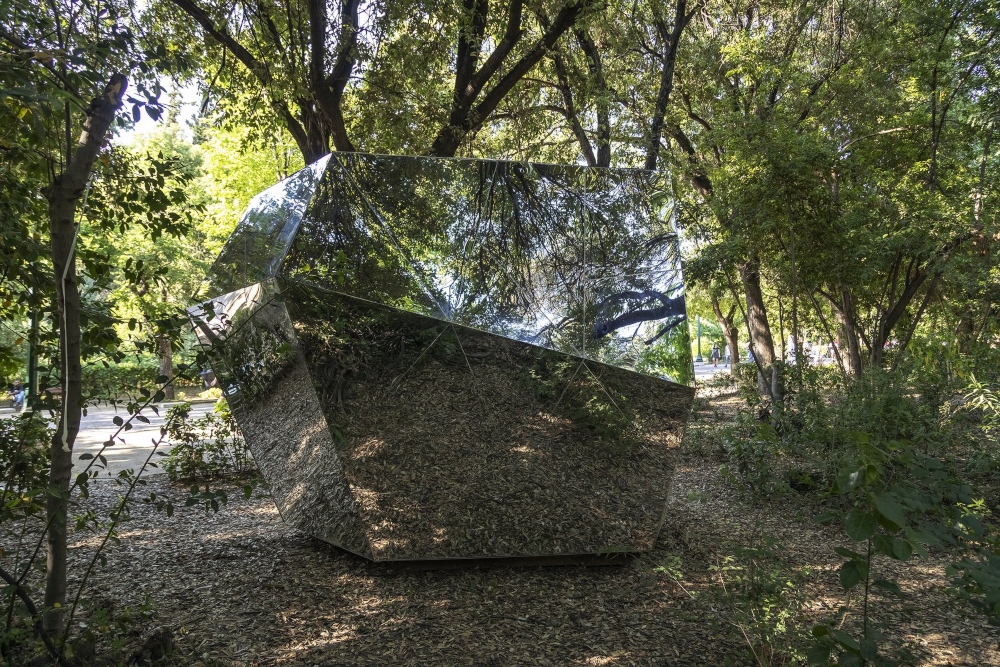 Diamond of Otherness - Kaleidoscope of the motions of the soul, sculpture by Maria Papadimitriou

This year, the exhibition invites visitors to follow pathways that will make them discover parts of the park that are not largely not known to the general public, such as the areas that run alongside Alexandras Avenue and to wander around the digital pavilions and events sited in the clearings and flowerbeds hidden away inside the park. This is a conscious curatorial approach, as most of the exhibits are site-specific commissions: visitors are hence encouraging to engage with the exhibition in the park’s most popular areas before "losing themselves within the park in order to discover startling exhibits, collective activities, and events".

As the Creative Director Irini Mirena Papadimitriou explains in her curatorial text, humans perceive and experience the world through our bodies, but that experience has for some time now been radically altered through the extended use of technology, which now shapes our perception of the world, others and our own selves, affect the way we understand out environment, our interactions and even the core of our nature, since we can now aspire to "change our human condition, extend and augment our bodies, escape them or maybe escape our mortality". 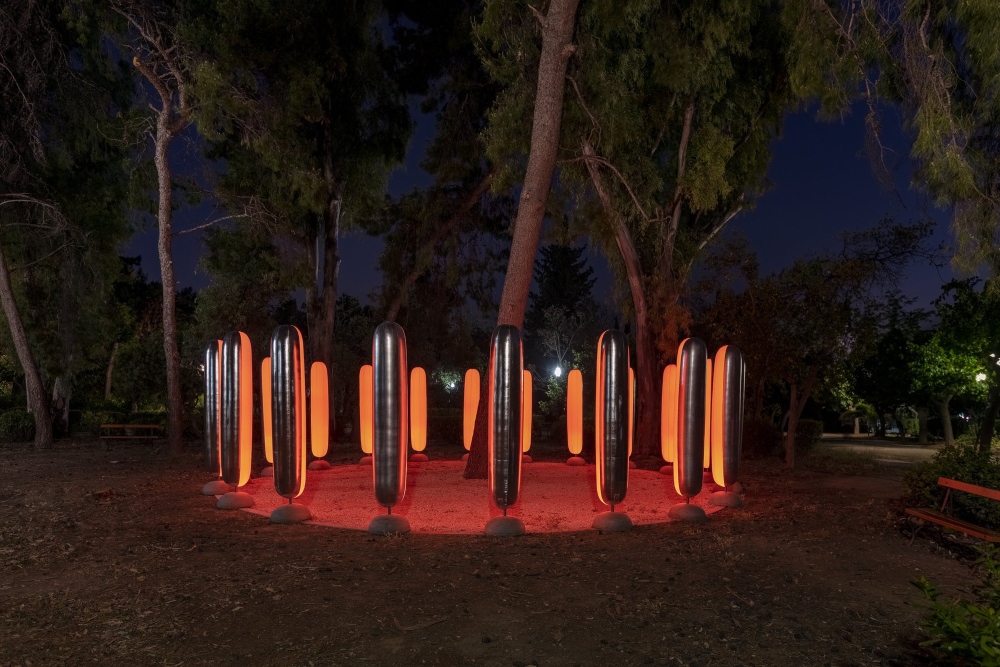 However, along with this new opportunities and freedoms, these technologies have also introduced new ways in which people can be monitored, manipulated, oppressed or marginalised, in overt or covert ways; yet, even in this sinister reality, hope can still be found in the nascent hybrid forms of existence, the "posthuman imaginaries" that "help us envision post-anthropocentric perspectives that enable kinship, equity and relationships across all forms of life, a collective and interconnected body". As she points out, plásmata is the Greek for "creatures", derived from plasso "to form, mould", and the plásmata one encounters in exhibition’s artworks reveal "a view of the human experience as a blending of material and immaterial, organic and machine, a merge of human and nonhuman".

Speaking to Euronews on the choice of Pedion tou Areos as the location for the exhibition, Afroditi Panagiotakou, Director of Culture at the Onassis Foundation, explained that the park is cherished for the sense of togetherness it offers, as it makes us understand that "no matter how different our starting points may be, there are common needs and desires that interconnect us ".

In its article, the famous American visual-arts magazine ARTnews deems Plásmata "an incredibly ambitious move", as the organisers had to face the combined difficulties of a digital exhibition and an exhibition in the public space; despite those hurdles, writes Shanti Escalante-De Mattei, the exhibits of Plásmata are "a show of not just the diversity of what digital art can be, but a new standard by which we might judge what it means to have an "immersive" exhibition. 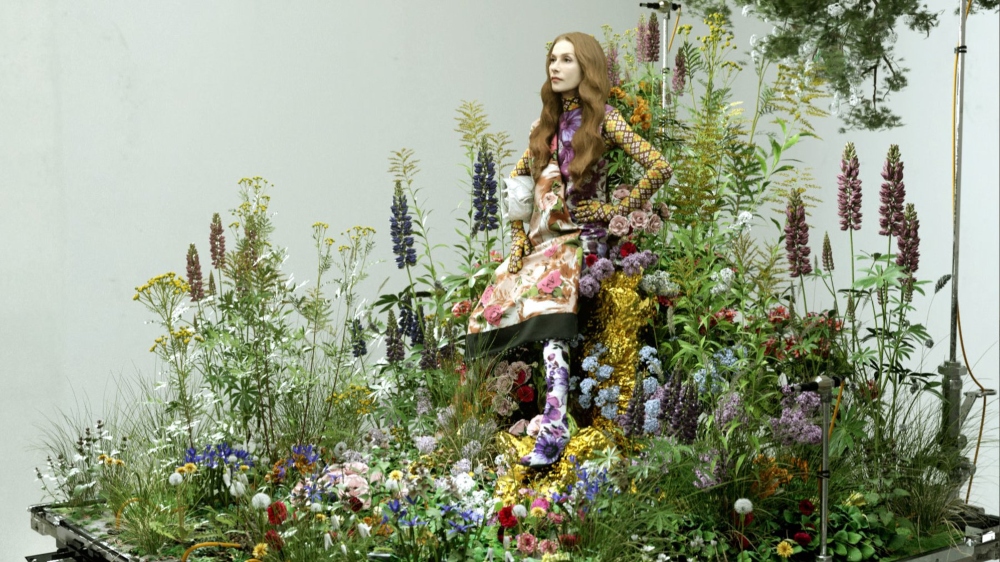 There is a map that can help the visitor navigate the exhibition, which you can download on your smartphone. Apart from the location of the exhibits in the park, it features basic information about each piece, as well as audio narrations where each artist explains the inspirations and aims behind their respective works.

Pedion tou Areos is one of the largest public parks in the municipality of Athens and one of the oldest planned recreational areas in the city. Its name means the "Field of Ares", the ancient Greek god of war (better known by his Roman equivalent, Mars). Its name evokes the Campus Martius area in Rome, as well as the French Champ de Mars, large public greenspace in Paris.

Located in the heart of Athens, it was designed in 1934 to pay tribute to the heroes of the Greek War of Independence of 1821, and is hence adorned with busts of prominent figures of the Revolution. The original plan had also included the construction of a "Pantheon" for the revolutionaries, and a large church dedicated to the Greek Independence. 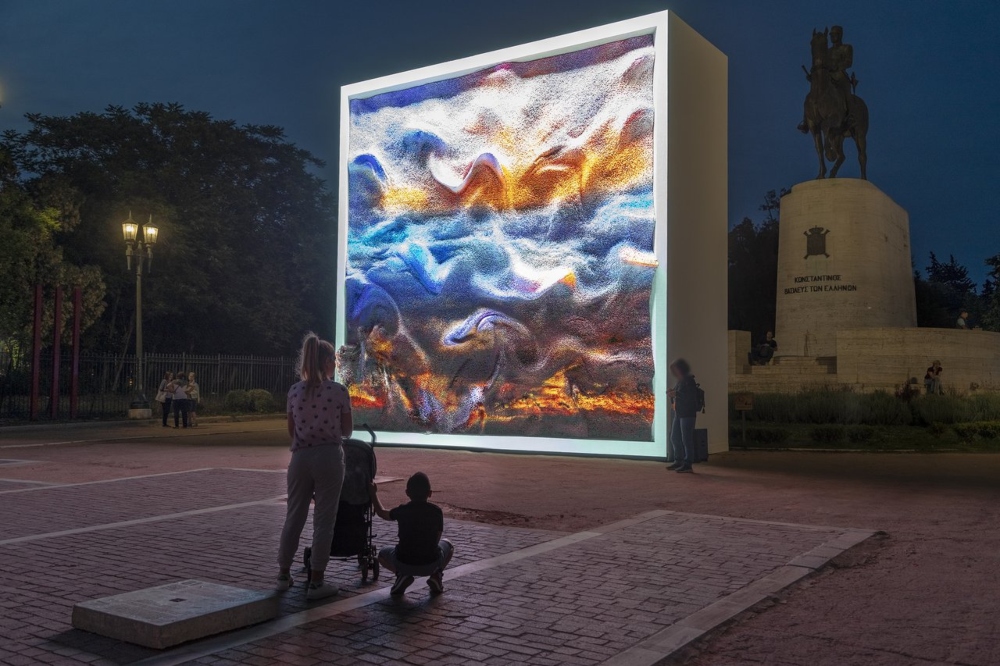 Works under the supervision of architect Alexandros Tompazis towards the radical renovation of the Park took place between April 2008 and December 2010. The redevelopment covered an area of 25 hectares and was financed by both EU and national funds.

In front of the main entrance of the park stands a 6-metre tall bronze equestrian statue of King Constantine I of Greece, created by Italian sculptor Francesco Parisi and unveiled in 1938. It is at this point that the Plásmata exhibition opens, reaching all the way to the Alsos open-air theatre and the pine forest that lies beyond.

Read also via Greek News Agenda: Pedion tou Areos – A park dedicated to the heroes of the Greek Revolution of 1821