What Greece has actually done to deal with the crisis: Common beliefs and their refutation 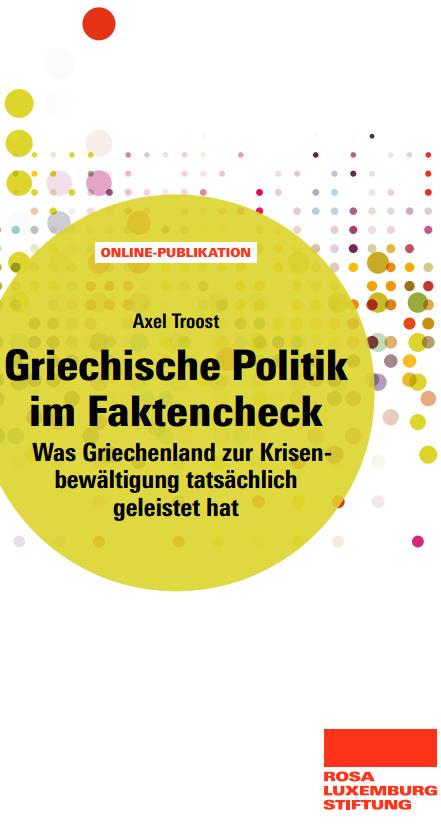 “There is a widespread opinion in Germany that Greece is to blame for the problems it now finds itself in” noted a ‘Rosa Luxemburg Institute’ publication that tried to dismantle several myths and over-moralizing narratives about the “lazy Greeks” and Greek exceptionalism in July 2011. The publication stressed that German politicians and the media “have no end of proposals on how to ‘solve’ the crisis: Greeks should save more, work more and sell their public property - and if all these measures do not help, then Greece will just have to leave the Eurozone or declare bankrupcy”.

Six years later, a new publication by the same institution, timely authored by Axel Troost, Vice Chairman of Die Linke party, focuses on ‘The facts about Greece’s policy: What Greece has actually done to deal with the crisis” (Griechische Politik im Faktencheck: Was Griechenland zur Krisenbewältigung tatsächlich geleistet hat, April 2017). Troost underlines that in common German beliefs about Greece, often reproduced by systemic German media, euro-crisis is represented in a clearly one-sided manner, as the result of the failure of other countries’ governments (and to a certain extent of their people). But the question of the very structural causes of the crisis is only rarely raised and the claim that “we, the Germans, we have done it all well, while the Greeks and other people of southern Europe were not as diligent, as frugal, as clever, as incorrupt and as honest as we were” is a significant element of   the new [German] political culture.

As Axel Troost mentions in his introductory remarks: "Was Greece before the outburst of the crisis in 2009 an idyllic country and did it turn overnight  into a country in crisis?... This text aims at addressing some of the alleged and still persistent "truths" about the Greeks and place them under scrutiny. As vice-chairman of "Die Linke" I've been in close contact with Alexis Tsipras and the Greek government and I’ve been wondering  myself  if  my criticism of the "Greek affairs" seemed plausible or justified by lived experience... I've come to understand that in the question of Greece... biased statements are being spread, facts are being distorted and the country is being defamed... This publication aims at facing off against these untruths and at collating the facts, without embellishing them”.

Axel Troost organizes his argument by describing six (6) German common beliefs that constitute false descriptions of the situation in Greece, and offering their respective refutations. Below is a summary of the text*:

Common belief no1: Greece cannot be reformed. All reforming attempts have been in vain. There’s no willingness to learn from the mistakes of the past, to eradicate the spoils system, to modernize the State and render it more effective. There has been either refusal to proceed with the reforms or incomplete implementation (misapplication even after the reforms have been voted.

Refutation: For years now, Greece has been ranked as the country with the highest reform responsiveness according to the OECD (Greece has been on the top of the OECD’s reform ranking for years now) and it has implemented numerous fundamental legislative changes and measures for higher fiscal performance. This includes regrettable neoliberal reforms, as the outcome of the pressure of Greece’s international creditors, but also measures to alleviate austerity. Here’s a list of the most important reforms made by Alexis Tsipras’ government.

Common belief no2: The Greeks have not yet cut down enough their expenses. The Greek government is not willing to consolidate its public finances. There’s no other way to explain the fact that, despite the cut spending efforts, Greece is always in need of new financial aid and its debt is still growing.

Refutation: In the past, Greece has undergone considerable spending cuts. Αnd yet, this has led to an economic collapse, which in turn hampered attempts to consolidate public finances and to relieve the debt, leading to a humanitarian crisis. If we had to follow a similar policy here in Germany, then we should’ve cut from our budget up to 56 billion euro. For the Greek budget, which is already overstrained enough, such cuts are not only irresponsible for humanitarian and political reasons, but they are also not beneficial, if we take a look at historic comparative data. The recession that Greece has gone though is similar to the Great depression of 1930. With the first adjustment program Greece saved up to 37.5 billion euro, with the second program it saved up to 25.2 billion euro and with third program it saved up to 9.8 billion euro. (overall 72 billion euro or in other words 5% of its annual GDP  for each year of the crisis, 2010-2018)

Common belief no3: Tsipras is always trying to deceive the international creditors. Greece is delaying in every possible way the reforms, as if the country moved in slow motion.

Refutation: Greece has already implemented the measures required under the second program, or it has been preparing the way for them. On the contrary, the international creditors are divided about serious issues, they break their promises, contributing to a significant delay in the running of the program. Schäuble plays an unpleasant role in this power struggle, because he does not want at any price, certainly not before the German elections, to put to the vote measures that are likely to be interpreted by the German public as a «retreat». With his contradictory attitude towards the IMF, whose demands of debt relief he abruptly rejects, while at the same time insisting on keeping it on board as the “taskmaster”, Schäuble is a significant hindering factor.

Common belief no4: The rich people did not pay taxes in the past. Even with the government of Tsipras this has not changed.

Refutation: Contrary to the other conservative governments of the past, Syriza has raised the tax rates for the rich (maximum tax  rate for the higher incomes, -from 42% to 45%- solidarity levy, shipping companies tax) and it has also massively enforced the tax legislation (intensive bank-intelligence, implementation of an electronic asset register, international cooperation to combat tax evasion, enhanced use of lists of potential tax evaders, with fivefold higher efficiency than the previous governments). Even if a lot remains to be done, in the media coverage these steps forward are often concealed or even twisted.

Common belief no5: The self-employed will be charged even more taxes and they will turn to black labor.

Refutation: For the majority of the self- employed charges have decreased. In the past, for those with an annual income up to 50.000 euro there was a flat tax rate, now the self- employed are subject to the same progressive tax rate as the employees. In the past, the social security contributionsfor the self-employed rose depending only on the duration of the employment, regardless of their income. After the reform, the social security contributions are income – oriented and equivalent to those of the employees.

Common belief no6: Pensions in Greece are still too high and disproportional. Greece lives beyond its means. The pensions are above the European average, they should therefore be further reduced.

Refutation: Due to the fact that in Greece there was no social assistance system, as in Germany, the pensions are for many families the last resort. The monthly pension of almost half of the Greek pensioners is below 600 euro, which is not enough to live on. The fact that national expenditure for pensions is still above the European average, not only does it not allow further cuts but it also reduces, at a time of high unemployment, the social insurance income. Even if the pension expenditure was under the European average, it was necessary to reform the previous pension system fundamentally, which was in part unjust and fragmented. The new phalanx of the creditors pushes for further cut-offs in pensions, despite the ones already implemented, which is the wrong choice, considering the painful cuts und the lack of basic social security.

Pleading for a growth strategy and a solidary Europe

According to Axel Troost European austerity policy and neoliberal demands have, even as to their own standards, failed. They have not overcome the crisis, they have not generated growth, they have not made people’s lives better in the countries in crisis and they have not created jobs. But there are alternatives to this policy […]. The core message is that both the EU and the euro have to change. To this purpose there are specific and feasible measures for building a solidary Europe, set free from the arbitrariness of the markets, […] so that it will no longer be an arena of competing States dominated by Germany. Only such a European model could help break down the false truths of new as well as of old nationalism in peoples’ hearts and minds.

*Translated and edited by Avgi Papadopoulou and Nikolas Nenedakis