Greece-Portugal Join Forces for Solidarity, End to Austerity in EU

Greek Prime Minister Alexis Tsipras and his Portuguese counterpart Antonio Costa signed a declaration yesterday in Athens (11.4), calling for an end to austerity policies and more solidarity across the continent in dealing with the refugee crisis. 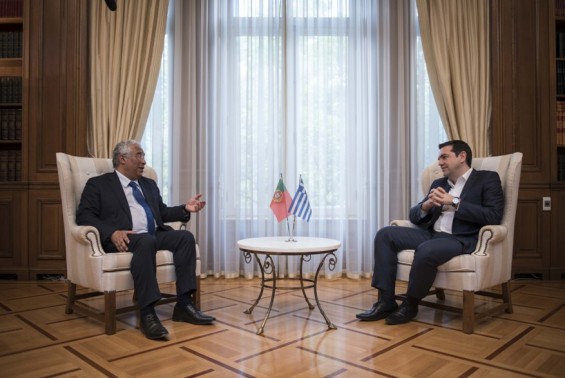 The two leaders discussed to strengthen bilateral cooperation, on international, European and regional levels, in dealing with the economic crisis, the security crisis and the migrant crisis, stressing the importance to have more solidarity in the EU and form a wider front of progressive forces, which will promote alternative policies in the region. "We are facing a multi-faceted crisis in the economy, security and migration", Tsipras said welcoming Costa at his office, urging the need to “promote an alternative agenda of solidarity, social cohesion and democracy". Costa shared the conviction that austerity policies are wrong and insufficient to overcome the existing challenges and urged the EU to rise to the occasion and not allow the entire burden of the refugee crisis to fall on one country like Greece, because this is a European problem.

In the joint declaration, entitled "Against Austerity, for a democratic and progressive Europe with social justice and cohesion" the two governments agree for closer cooperation at all levels to put forward a progressive programme of democratic Eurozone Governance, economic revival, employment creation, centered on quality jobs, and socially just and environmentally responsible growth. Both countries criticize the asymmetrical process of European integration, and concure that policies imposed in recent years by creditors based solely on austerity were ineffective, as they fuelled recession, unemployment, and poverty. Instead, they urge for "a new European social contract" and policies to address common problems of nationalism, xenophobia, extremism and populism across Europe.

Regarding the refugee crisis, both sides are calling for cooperation on the European refugee policy on the basis of solidarity and expressed their opposition to unilateral actions and closed borders, favoring a revision of the Dublin II protocol so that the burden is fairly allocated. The two governments also agree on cooperating more closely for strengthening EU’s diplomatic efforts for peace and stability in the wider region, supported by a coherent, complete and targeted policy against terrorism.