On Saturday, April 16, Pope Francis completed a historic trip to Lesvos, the Greek island on the frontline of Europe’s migrant crisis, accompanied by the Ecumenical Patriarch Bartholomew of Constantinople, and Orthodox Archbishop Ieronymos II of Athens and all Greece.

Accepting the invitation from his All Holiness Bartholomew I, Ecumenical Patriarch of Constantinople, and the president of the Hellenic Republic, the Vatican announced  (7.4) the visit of his Holiness Francis to Lesvos to meet with refugees at this point of first arrival in Europe for hundreds of thousands of men, women and children, who make the perilous boat journey from Turkey. In his invitation to the Pope, the President of the Hellenic Republic, Prokopis Pavlopoulos, had described the difficult circumstances of the refugees stranded in Greece and had noted the need to raise awareness on the issue in other European countries, while underlining that this visit would help strengthen the efforts to raise awareness for the refugee drama. 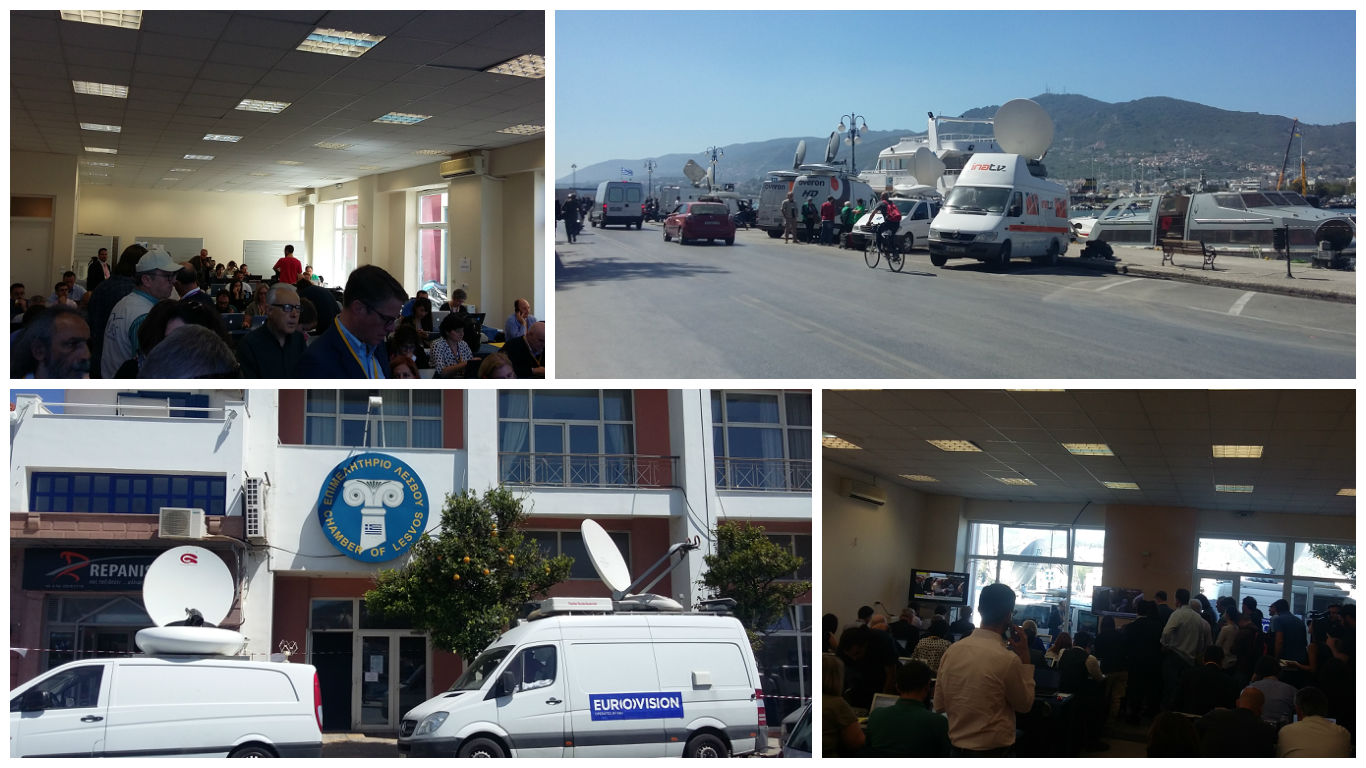 The Primates of the Orthodox and the Catholic Churches decided to visit the hotspot of Moria in Lesvos, on Saturday April 16th and meet with refugees, in order to send a strong message of awareness to the international community regarding the refugee crisis. Prior to the Pontiff’s arrival, international media had commented that this visit was something more symbolic than the mere transmission of a political message about the need to welcome refugees. It was regarded as a reunion of Christianity's two most important leaders which, despite the thousand-year schism between the two Churches, were willing to speak with an increasingly unified voice beyond the realm of religion on pressing issues such as climate change and humanitarian crises around the globe.  At the same time, analysts saw it as evidence of an increasingly important Catholic-Orthodox partnership that has been strengthened by shared concern for Christians being exterminated by Islamic extremists in the lands of Jesus' birth.

In the few days prior to the visit of the leaders of the two Churches, the mayor of the island expressed hope that this historic event would help illuminate the message of peace and solidarity that the island wants to share. Noting that “Europe is at a very critical juncture” and that “it either treats these people humanely and follows a path of solidarity and cooperation or takes a dark, fascistic turn”, he underlined how difficult it is “to see people who are decent, who have risked their lives to get here, who have been exploited by human smugglers, being treated like this”.  Over 200 foreign journalists prepared to cover the historic visit and to broadcast it live to millions of people all over the world. Vatican spokesman father Federico Lombardi in an exclusive interview to ANA-MPA expressed the view that the Pope, the Ecumenical Patriarch and the Archbishop of Athens, as religious and moral but not political authorities were acting in order to appeal dynamically to the sense of responsibility of politicians, while proposing “the necessary principles and refer to indispensable needs, suggesting guidelines that lead to meaningful consequences”. He went further to emphasize the fact that the visit was a "humanitarian and ecumenical gesture," not a political one, and explained that the Pope and the Orthodox leaders wanted to draw attention to "a situation in which many people are suffering" and where a "solution worthy of the human person" still must be found.

A few days ahead of the visit to Lesvos, Ecumenical Patriarch Bartholomew said in an interview with Italian daily Il Messaggero that Europeans should take inspiration from the generosity of Greeks confronted with a mass influx in their country, urging Europe to stop dividing economic migrants from asylum seekers. 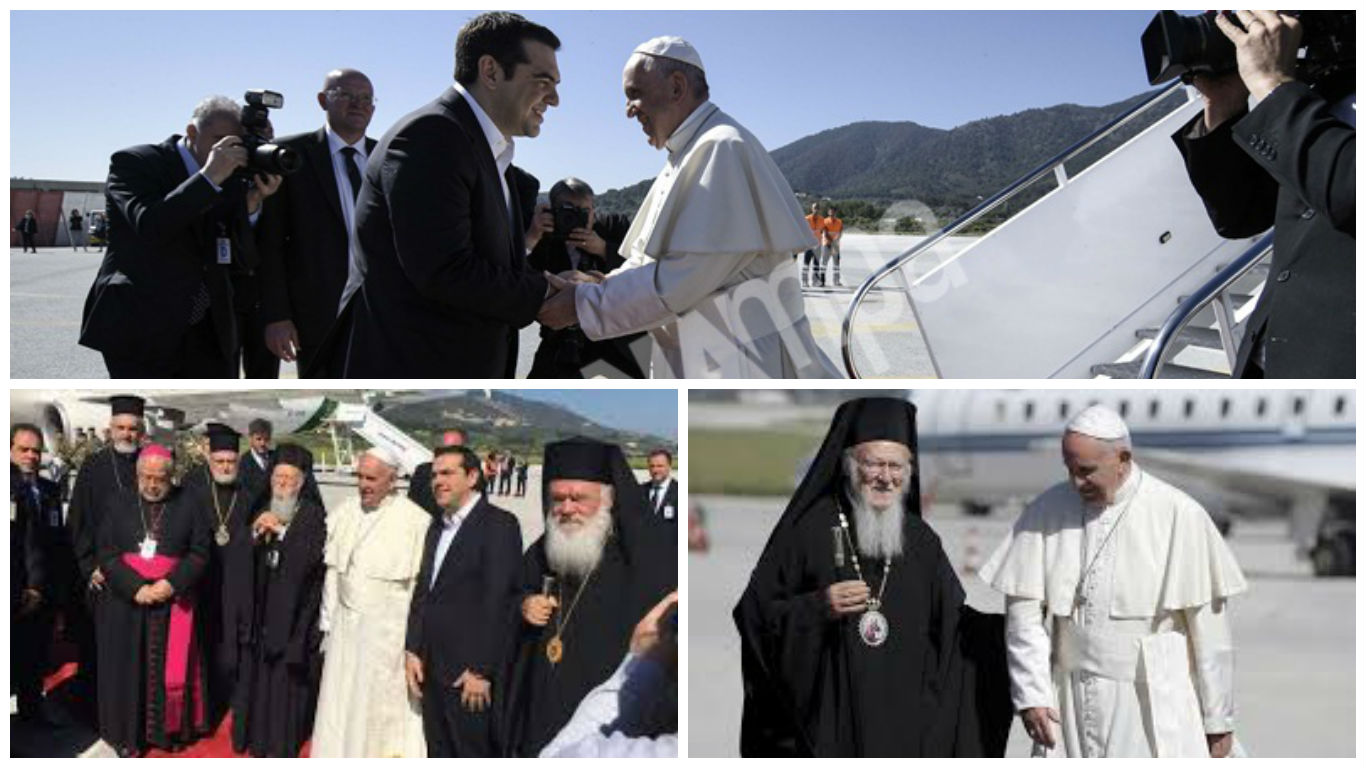 Pope Francis was welcomed in Lesvos by the Greek Prime Minister Alexis Tsipras, who hailed the visit as a "significant initiative at a crucial time." Tsipras said that the visit illustrated the universal human values of solidarity when others, in the name of Christianity, were greeting the refugees with walls, fences and violence. He noted that the initiative by the three Church leaders is sending a message that transcends both Greek and European borders and stressed the need to bring a message of peace and put an end to the war, which feeds the waves of refugees.

"You are not alone" Pope Francis said to refugees at the Moria registration centre, where he traveled with the two Orthodox leaders.  The Pontific also praised the generosity of the Greek people in their handling of the refugee crisis, noting that they had responded to the needs even though Greece was going through a difficult time of economic crisis. "We travelled here to hear your voices and look you in the eyes. Those that fear you, have not looked you in the eyes. Those that fear you, do not see your faces, they do not see your children," said Patriarch Bartholomew, while noting that the Mediterranean should not be allowed to become a graveyard and should be a sea of peace."Only those that see the eyes of these little children can at once understand the full extent of the bankruptcy of humanity and solidarity that Europe has displayed in recent years toward these people," said Archbishop Ieronymos. 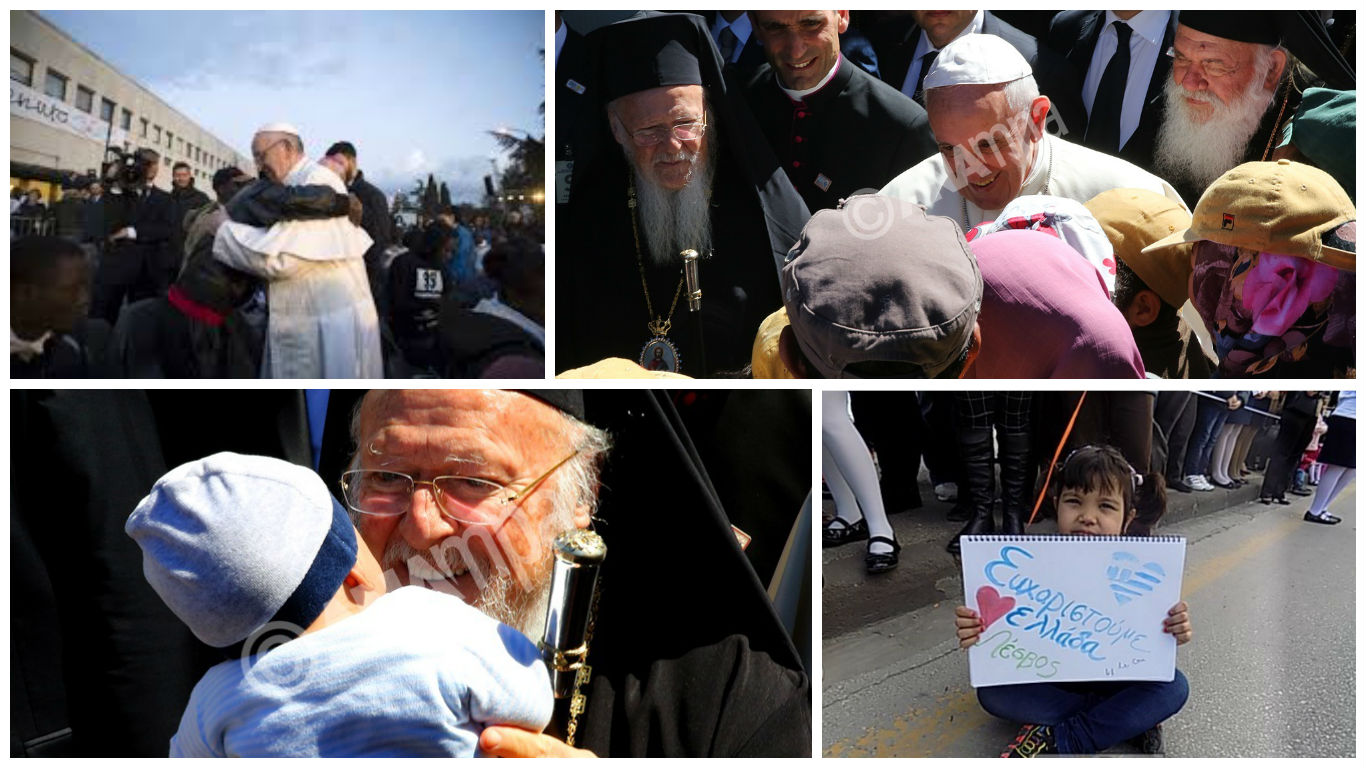 After concluding their speeches, the three religious leaders signed a joint declaration, appealing to the international community to respond with courage to the immense humanitarian crisis and to the “tragedy of forced migration and displacement", as well as the deeper causes of this situation. They called for action through diplomatic, political and charitable initiatives, and through collective efforts, both in the Middle East and in Europe. 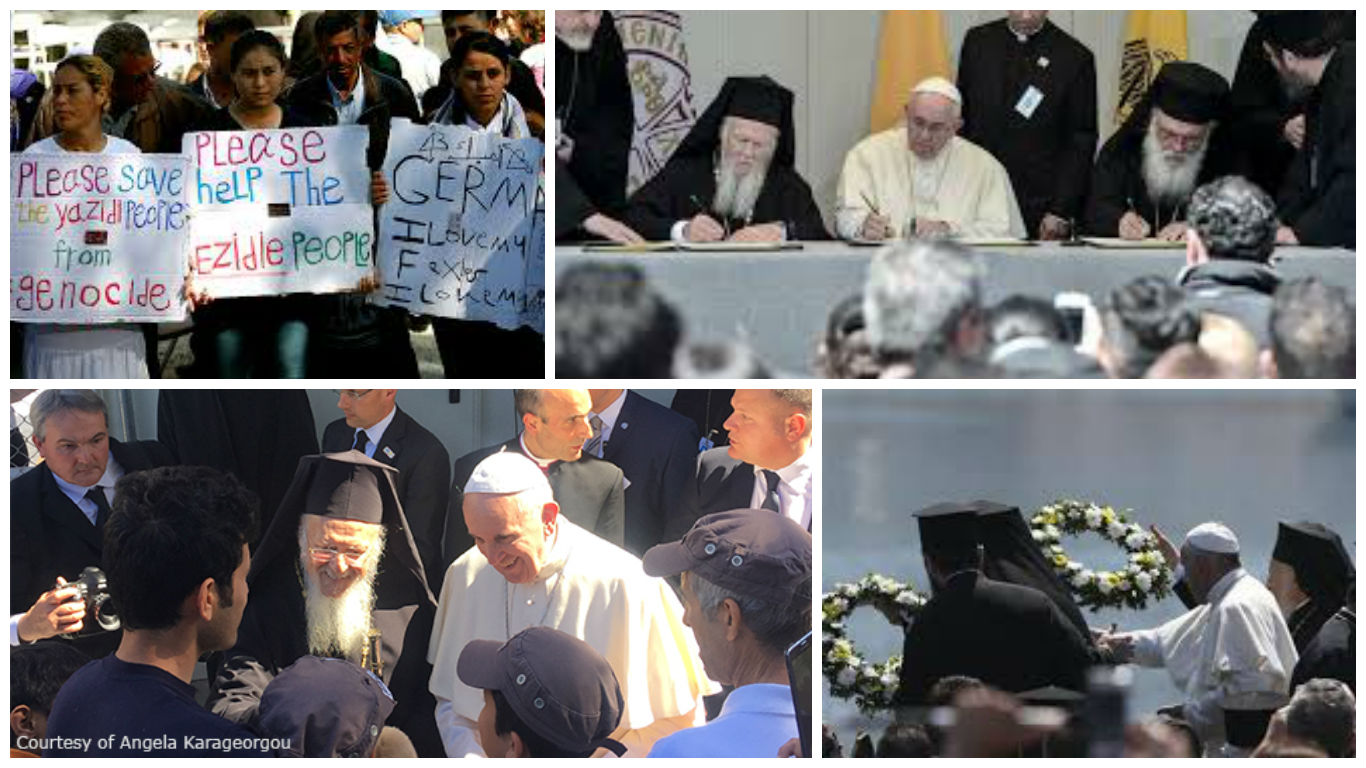 There were emotional scenes as the three spiritual leaders visited the migrant facility of Moria, greeting unaccompanied minors, women and small children who gave them more than a dozen drawings. Other refugees and migrants, most of whom arrived after March 20 and found themselves detained, carried signs and chanted slogans asking for 'Freedom'. They shook hands with hundreds of unaccompanied minors, met mothers and held their small children in their arms, while weeping men and women knelt before them, asking for their blessing and their help.  A young refugee sobbed as he kissed the hands of the Pope and Patriarch, asking them to do something to give the refugees reason to hope. Another woman got around security to approach the pontiff, also breaking down in tears as he paused to listen to her. Pope Francis, Patriarch Bartholomew and Archbishop Ieronymos shared a meal of rice and vegetables, olives, bread and halva with three refugee families at the centre.

Concluding his visit to Lesvos on Saturday afternoon, Pope Francis returned to the Vatican with 12 Syrian refugees from the Moria camp. Speaking in St. Peter's Square on Sunday , the Pope said that his visit in Lesvos with Ecumenical Patriarch Bartholomew and Archbishop Ieronymos of Athens and of All Greece, aimed "to signify the unity in charity of all the disciples of the Lord” and brought the "solidarity of the Church" to the refugees and to the Greek people.