Alt. Minister of Economy & Development: The Challenge is to Reverse the Consequences of the Crisis 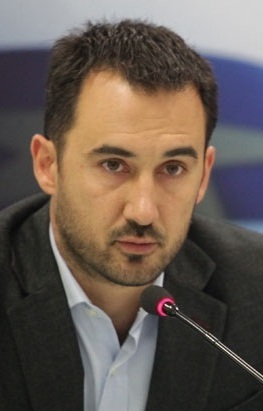 In an interview with Avgi daily newspaper (15.1.2017), Alternate Economy & Development Minister Alexis Haritsis talks, amongst other things, about the National Strategic Reference Framework (ESPA/NSRF) Programmes, the new Development Law, and industrial policy noting that the Government’s target is the immediate and effective provision of liquidity in the economy. This applies especially to SMEs and young professionals, not only with NSRF Programmes but also with the Equity Fund of Funds through which small and medium-sized enterprises (SMEs) will be able for the first time to access venture capital. Regarding EU strategies, Haritsis stresses that the Government demands the broadening and deepening of the political context of solidarity and cohesion of Structural Funds programmes to lessen the great disparities between member states and to converge their economies.

Asked to comment on the fact that NSPF funds absorption for the year 2016 reached 11.35%, outperforming the 7% target set by the European Commission, he attributes it to the hard work and concerted effort by the ministry and all bodies involved in the management and implementation of NSRF programmes for their rapid activation. The objective remains for this qualitative success to constantly translate into tangible improvements in the real economy and quality of citizens’ life.

Use of NSRF funds for social policies in Health and Education

Haritsis also refers to the social policies that the Government is going to implement through the NSRF funds mainly in the areas of Health and Education, underlining that these funds were already successfully absorbed last year for the prompt recruitment of high school teachers. Extra funds were also absorbed for state funded child care facilities, benefitting a wider public and with social prioritizing. To this end and in collaboration with the Ministry of Health, we are channeling efforts towards major reforms in the primary health sector, he adds.

Targets of the new NSRF programme

Haritsis goes on to stress that with more than 55% of the new NSRF programmes activated (calls for 9.8 bn. Euro), 2017 will be a year of significant fund absorption. A wide range of initiatives will be implemented, including major environmental infrastructure projects and social measures to boost employment and heal the wounds inflicted on society by the crisis and neoliberal policies.

In Small and Medium Entrepreneurship, which constitutes a key priority for us, says Haritsis, our efforts focus on the promotion of new, innovative and extrovert forms of support towards fundamental productive forces, especially young entrepreneurs, scientists and researchers; but most of all we are focusing on the strengthening of employment, so as to halt the brain drain. "Our goal is to create the right conditions to exploit the scientific potential of the country in knowledge-intensive and technology sectors that will produce high added value products and services, able to stand up to international competition", Haritsis underlines.

Asked how the Government is planning to tackle the need for liquidity and inability to access venture funds that entrepreneurs and professionals face, he notes that on top of the NRSF programmes, there three new financial tools were activated at the end of 2016: the innovating Equity Fund of Funds, Enterprise Fund II (ΤΕΠΙΧΙΙ) and «ΕξοικονομώΙΙ». These three Funds aim towards the immediate and effective provision of market liquidity, especially SMEs and young professionals who have been hit hard by the credit crunch in the previous years.

The three Funds are endowed with 1 billion Euros in resources and can leverage more than 2 billion Euros in the real economy. In particular, through the Equity Fund of Funds small businesses will be able, for the first time, to access equity and venture capital. Innovative businesses are thereby given the opportunity to obtain funds from large national and international investors they could not so far approach due to their small size.

In the first quarter of 2017, the new Infrastructure Fund will be activated, with emphasis on the energy efficiency of public and municipal buildings and tourism infrastructure, as well as the new Microfinance fund, which will support, inter alia, social and solidarity economy ventures.

The New Development Law is a breakthrough in relation to respective laws of the past, not only because it provides a combination of financial support and tax incentives but mostly because it lies emphasis on SMEs, synergies and networking, in priority areas such as research, technology or the agro-food industry. Moreover, for the first time social cooperatives are equally included in the law provisions.

Asked by Avgi if entrepreneurs have shown interest, Haritsis notes that the signs have thus far been clearly encouraging: in the initial period of less than four months, 800 investment plans are expected to be submitted, with a particular focus on industry / manufacturing and the primary sector, whereas during the four years the previous law was in force, a sum total of 1,200 projects only were approved.

Strategies for the productive reconstruction in the Industry sector

Asked what the Government strategy for the productive reconstruction of Greece is, given that he also assumed the Industry portfolio following the government reshuffle, Haritsis notes that: “The crisis in the Greek economy is not only financial, but fundamentally structural. It is the crisis faced by a distorted dead-end productive model. Therefore we are facing a double challenge: to reverse the consequences of the crisis of recent years by securing the necessary investment thrusts and to also lay the foundations for a new development model that is economically, socially and environmentally sustainable.

Thus, we seek to create chains of value, which will embrace all stages of production and in which manufacturing and the industrial sector will have a key role, the minister underlined. Through such a holistic approach the Greek industry can acquire a new life, adopting current international trends such as the shift to "circular economy", which emphasizes the reuse of resources and waste minimalization.

In this context, particular characteristics of the Greek economy, such as the small size of businesses, can turn into an advantage, by creating business clusters. With the available tools, such as the new NSRF and the development law, we seek to strengthen these areas: networking and collaboration, environmental sustainability, investment in research and technological innovation”.

Challenges for the European Union

Finally, Haritsis comments on the European challenges for 2017 as it is an election year in many European countries, as follows: “This year will indeed be critical for the future of Europe. The harsh austerity policies that have previously prevailed broadened the crisis of public confidence in European institutions and challenged the European idea. Eurosceptic, nationalist and xenophobic forces have appeared, claiming an enhanced role in many countries.

In the meantime, however, a crucial debate on the EU profile after 2020 has already begun within. This is a point where two approaches collide: one that wishes for cohesion policies as we know them to be virtually abandoned and for EU funds to be centrally distributed with convergence criteria between countries not being decisive. The other, the one that we adhere to, wishes for the widening and deepening of the political context of solidarity and of the cohesion programmes of Structural Funds, so as to lessen the huge disparities between the Member States and to converge their economies.

This option is a survival condition for the European Union, especially now that its cohesion - even its very existence, as shown by the British referendum - is being tested by neoliberal policies and the inflicted fiscal adjustment programmes.