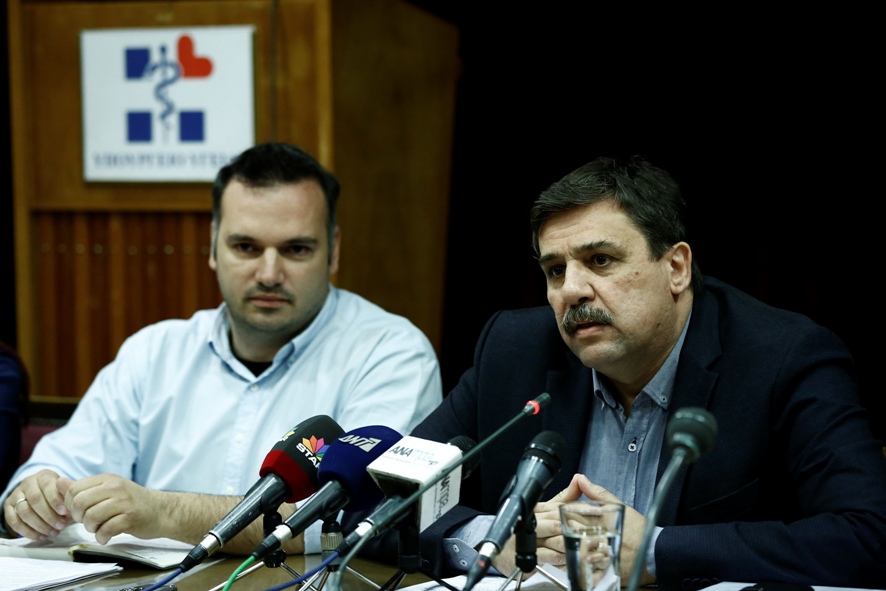 Stamatis Vardaros, Deputy Secretary General of the Ministry of Health and Andreas Xanthos, Minister of Health

In his recent speech at the 21st Economist Roundtable with the Government of Greece on June 28th, minister for Health Andreas Xanthos outlined the government’s twofold healthcare agenda: interventions that relieve those citizens most affected by austerity and the reform of primary healthcare. Stamatis Vardaros, Deputy Secretary General of the ministry of Health, responsible for Primary Healthcare, in an interview to Sunday newspaper “Epohi” (Το σχέδιό μας μεροληπτεί υπέρ του δημόσιου, 3.07.2017), talked about the fundamental objective of the reform, its implementation, the creation of Local Health Units, but also about the reactions to the consultation process.

In terms of interventions to aleviate citizens most affected by the crisis, minister Xanthons pointed out that the most critical so far was changing the institutional framework in order to guarantee free access for all uninsured citizens to public health structures. This change enabled people who lost their insurance capacity due to unemployment, precarious or uninsured work to freely access healthcare, without hurdles and bureaucratic delays. According to the minister, this new law “established the principle that health is a social good that must be provided by the state equally and regardless of people’s work status, insurance or income”. As to the other pillar the government’s healthcare agenda, reforming Primary Healthcare, Xanthos stressed that it will provide a “strategic response to the health system’s crisis and its passive privatization” as well as an answer “to the longtime demand for universal, equal and effective healthcare coverage of the population and a rational distribution of the limited material and personnel resources".

The Bill on Primary Health System Reform is going to be tabled in July to vote in Parliament, and as Prime Minister Alexis Tsipras said on Friday, "our immediate aim is to set up 239 local health clinics in 80 different regions of the country by the end of 2017," specifying that the regions were selected based on their healthcare needs and the socio-economic status of the local population. To staff these services, the ministry will announce in the immediate future more than 3,000 jobs for doctors and other healthcare personnel. Rebuilding healthcare will be "a titanic struggle amid very difficult circumstances" the Prime Minister said, adding that the situation in public healthcare was "critical" and "on the verge of collapse" when he took power in 2015. According to Tsipras, the collapse of the health system was "conscious and intentional" founded on the notion that the public character of healthcare is outdated, and in order to open the way for private interests to take over.

Stamatis Vardaros, Deputy Secretary General of the Ministry of Health, in his interview for 'Epohi', stressed the the fundamental objective of the reform is that the “health system regains control of healthcare, with the activation of the concept of the family doctor, either through public structures like the Local Health Units (TOMY) or through contracts with freelance doctors. The citizens will have their own health consultant, their family doctor, free of charge, who will navigate them through the rest of the system.” Along with the activation of the family doctor, another major intervention is that the health system will be reoriented towards prevention, awareness and community, where other health professionals besides doctors, such as health visitors, nurses, social workers, will play a crucial role.

During the public consultation on the Bill, Vardaros notes that there were two types of reactions: “from the Left, the criticism was why EU funds were used for this reform. Our answer is that we would obviously want to finance the reform by the state budget. However, we need to take into account the difficult financial situation - I think we are managing a painful compromise, and in the long-run EU funding will be gradually reduced as the state budget increases.

On the other side, you have the critique from the Right that characterizes the Local Health Units as structures akin to Soviet Union institutions. The answer to such criticisms is that public healthcare systems, even quite advanced, were not unique to the Soviet Union, but sexist right now in many are well-developed capitalist states. A prime example of this is the Scandinavian countries, whose healthcare systems are the model for all the progressive forces of Europe.

Furthermore, there has a reaction from part of the medical world, especially the private sector, who sees that through strengthening and developing Primary Healthcare and the National Health  System overall, the private heath sector will lose a significant share of the pie.” Speaking about the private sector’s reaction, Vardaros notes that the ministry accepts the criticism that the reform is biased in favor of public health sector: “It is clear that this is our intention and the mark we want to leave. Our plan clearly aims to compete with the private sector in healthcare. The private sector can have a role that is complementary to the public sector, after the latter has exhausted its resources.”

Vardaros concludes that “I want to make it clear that this is an intervention that has been a part of the Left’s electoral program for 30 years. It is an intervention based on the principles set by the Declaration of Alma-Ata -adopted at the International Conference on Primary Health Care in 1978. The philosophy behind this political project is to strengthen the public healthcare system, ensure equality of access and level of health services for all citizens, and to protect our most vulnerable fellow citizens, a philosophy that is obviously part of a broader Left policy agenda.”