Complete set of measures for fire victims unveiled by the government

The measures are grouped into three categories: A) Measures for the immediate help of fire victims. They include a € 5,000 benefit for families and individuals affected by the fire and a € 6,000 benefit for families with three children or more. For businesses that suffered damages, there will be a benefit of € 8,000. There are also measures of immediate tax relief, such as the dropping of the ENFIA tax for homes that have been destroyed. B) Measures for the families of the victims. C) Measures to restore damages to private and public property.

Measures also include the freezing of forced home sales until the end of September, the provision of a € 1,200 benefit to families to cover telecommunication needs (regardless of which phone company they are with) and the waver of road taxes for vehicles destroyed in the fires.

1. Provision of a one-off emergency allowance to the victims, after material damages have been fully assessed by the crews of the Ministry of Infrastructure and Transport.

The allowance to families or individuals affected will be € 5,000. For families with three children or more, the amount will be € 6,000.

For businesses affected the aid amounts to € 8,000.

2. Provision of unemployment benefit plus a lump sum equal to 45 days of unemployment allowances (€ 650) to those who are suspended from work as a result of the destruction from the fires of the business that employed them.

3. One-off payment of a special allowance equal to the gross amount of two monthly pensions to pensioners of EFKA social insurance

4. Acceleration of pension applications already submitted or to be submitted by September 31, 2018 for people from the affected areas.

5. Direct tax relief measures for people from the affected areas, which include an extension of the deadline for filing income tax returns for both natural persons and legal entities, an extension of VAT returns, and exemption from ENFIA (real estate property tax) for real estate located in the affected areas which has been completely destroyed or suffered functional damage, rendering it non-habitable.

6. Direct insurance relief measures for companies and insured persons who have a professional establishment or activity in the fire-stricken areas, including the suspension of current contributions and clearing installments until December 31, 2018.

7. Suspension of payment obligations for borrowers from funds of the Workers' Housing Organisation (OEK) for a period of up to 36 months, without penalty charges.

8. Suspension of foreclosure auctions for those affected by the fire until September 30, 2019

9. Provision of an annual grant of € 1200 to each affected family to cover all its telecommunications needs regardless of provider.

10. Emergency Financial Assistance to the Municipalities of Marathon and Rafina-Pikermi amounting to € 2,000,000 that can be used to meet immediate needs such as the recruitment of temporary staff, food and pharmaceutical supplies, as well as the immediate reparation of damaged infrastructure.

11. Tolls suspension on toll roads in the affected areas until the fire crisis is tackled.

12. Exemption from road taxes and other administrative fines for owners of vehicles destroyed in the fires.

13. Public Power Corporation S.A. has already decided to write off debts for electricity consumption from January 1, 2018 to this date, for home and business owners whose property was destroyed and for fire victims' families. Older debts will also be adjusted.

14. The National Organisation for the Provision of Health Services (EOPYY) will replace all destroyed medical and technical equipment owned by people with disabilities or chronic disease with no charge.

15. Children of affected families who already study, or will be admitted to Higher Education Institutions this year, automatically acquire the right to be transferred to the institution that is closest to their home. This measure may be extended for subsequent years by decision of the Minister of Education.

17. The Ministry of Defence has also announced extraordinary measures under its jurisdiction.

B) Measures to compensate and support the families of the victims

2. Each minor whose parents died in the fire will be granted a monthly allowance of € 1,000 until they reach adulthood or until the age of 24 for students.

3. Orphans who already study, or will be admitted to Higher Education Institutions this year, also automatically acquire the right to be transferred to the institution that is closest to their home. This measure may be extended for subsequent years by decision of the Minister of Education.

5. One first or second degree relative of a deceased person acquires the right to civil service employment. The same right is also acquired by those who have suffered a disability with a rating of 67% or more due to the fire.

Moreover, the Greek Parliament unanimously decided to provide a lump sum to an account of every child affected by the fires. The amount will be decided upon when the damage assessment process is completed.

1. Due to the wave of solidarity from foreign governments and citizens from Greece and abroad, the Greek government has decided to establish a special account with the Bank of Greece to finance any form of action for the relief of those affected by the fires in East and West Attica and for the rebuilding of damaged private and public property.

The account is managed by a three-member committee which includes the Speaker of Parliament, the Minister for Infrastructure and Transport, and the Minister of Finance.

The account management will be audited annually by accountants appointed by the Minister of Finance, whose findings will subsequently submitted be to the Court of Auditors to ensure its lawful operation.

This account can receive contributions from foreign countries, companies and citizens from Greece and abroad.

Our goal is to promptly relieve affected areas and restore public infrastructures, grant compensations to homeowners and rebuild destroyed properties; for this reason we will use all the special arrangements that provide fast track licensing procedures for all relevant projects and where necessary there will be complementary legislative interventions.

The Greek State makes a commitment that the additional costs required for the full relief and restoration of the affected areas will be covered in full by the Public Investment Programme under the same special procedures.

2. For the first time, special aid will be granted for the restoration of the areas surrounding damaged buildings.

3. The Ministry of Infrastructure will conduct all required inspections and appraisals for the restoration of affected buildings without charges for property owners. 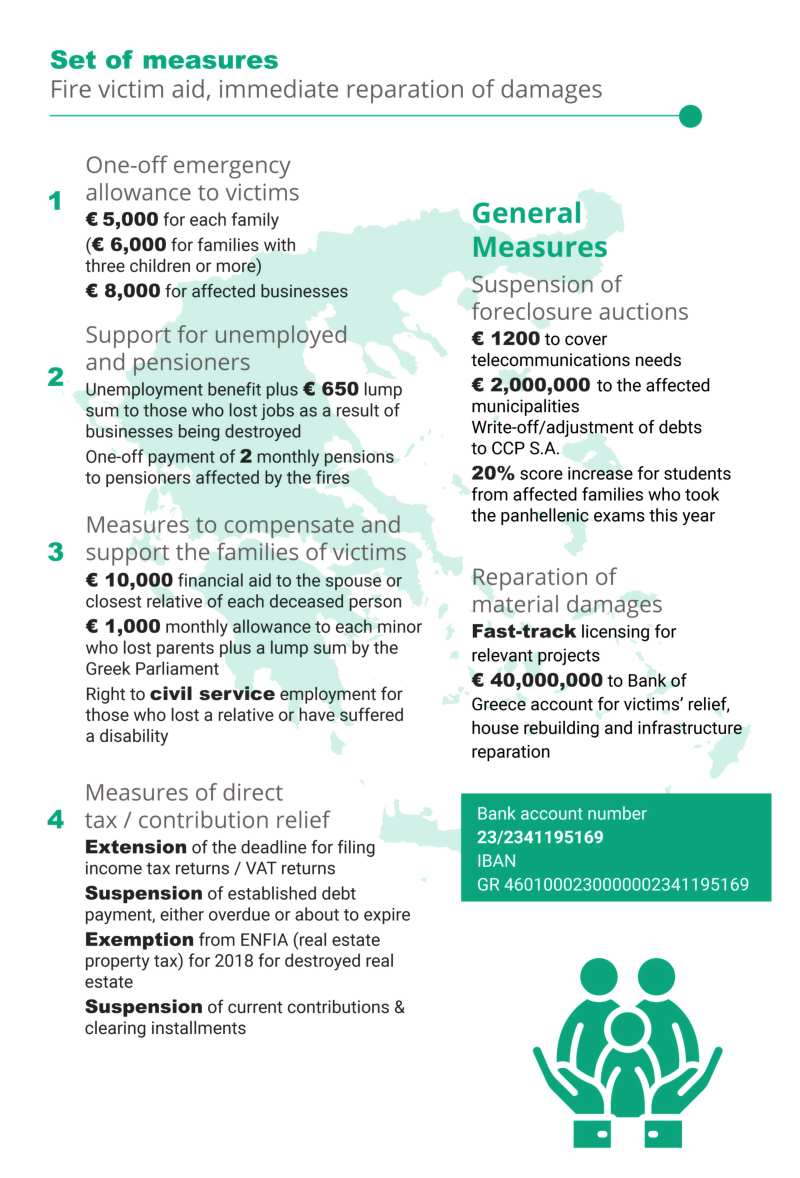