It may not be the lost city of Atlantis, but it is close enough! Egypt’s sunken cities of Thonis-Heracleion and Canopus, known in modern times as the lost kingdom of Cleopatra, was not something anyone expected to find beneath the sea off Alexandria, until French archaeologist Franck Goddio, who has dedicated his entire life to searching for remnants of lost civilizations from the past, saw a colossal face emerge from the watery shadows 6.5 km off Alexandria's coastline and made in 2000 one of the greatest archaeological finds of recent times. Among the underwater ruins were 64 ships, 700 anchors, a treasure trove of gold coins, statues standing at 16 feet, and most notably the remains of a massive temple to the god Amun-Gereb, and the tiny sarcophagi for the animals that were brought there as offerings. Other findings included weights from Athens (which have never before been found at an Egyptian site) and giant tablets inscribed in ancient Greek and ancient Egyptian showing that when it came to subduing Egypt, the ancient Greeks knew how to win hearts and minds. 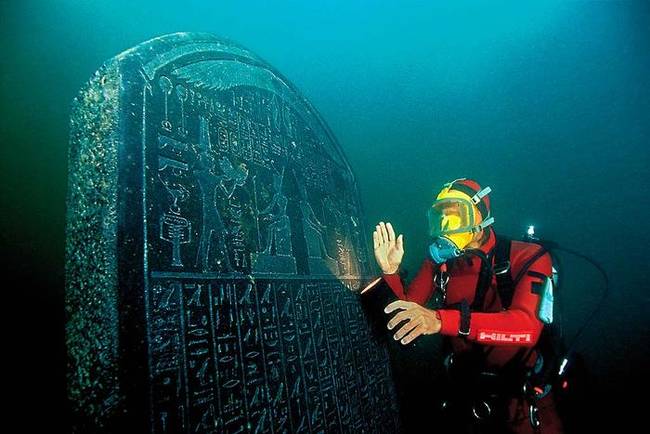 For centuries, Thonis-Heracleion was thought to be a legend, a city of extraordinary wealth mentioned by the Greek historian Herodotus (who speaks of a the great temple of Herakles that was built where the famous Greek hero first set foot on to Egypt) and visited by Helen of Troy and Paris, her lover, but was apparently buried under the sea. In fact, the city truly existed and it was founded probably around the 7th-8th century BC. A decade after divers began uncovering its treasures, archaeologists have produced a picture of what life was like in the city in the era of the pharaohs. The city disappeared beneath the Mediterranean around 1,200 years ago and was found during a survey of the Egyptian shore at the beginning of the last decade. After its discovery in 2000 and a four-year geophysical survey by Dr. Franck Goddio and his team from the European Institute for Underwater Archeology (IEASM), the city’s life at the heart of trade routes in classical times are becoming clear, with researchers forming the view that the city was the main customs hub through which all trade from Greece and elsewhere in the Mediterranean entered Egypt.

Outstanding objects from this discovery are currently on display at the “Sunken cities: Egypt’s lost worlds exhibition” taking place at the British Museum for an extended run of six months (May 19- November 27, 2016). The show, which is the Museum’s first large-scale exhibition of underwater discoveries, is transforming one’s understanding of the relationship between ancient Egypt and the Greek world and the great importance of these ancient cities. As Franck Goddio, President of IEASM and exhibition co-curator said: “the exhibition presents unique insights into a fascinating period in history during which Egyptians and Greeks encountered each other on the shores of the Mediterranean”. 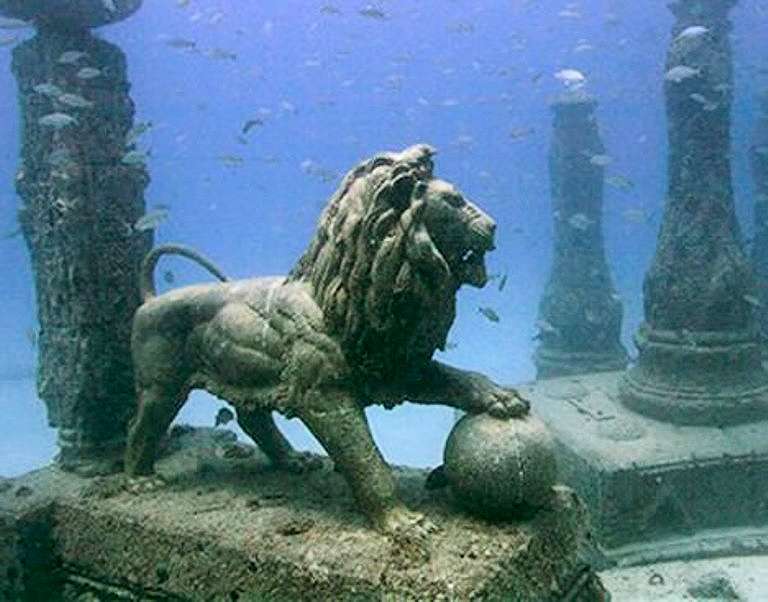 However, a mystery that will remain largely unsolved about the city of Thonis-Heracleion is why exactly it sank. Goddio’s team suggests the weight of large buildings on the region’s water-logged clay and sand soil may have caused the city to sink in the wake of an earthquake. Similarly, Masson-Berghoff, curator of the “Sunken Cities” exhibition, explains that: "Several natural phenomenon caused these cities to sink by a maximum of (32 feet) below the sea" noting that a naturally rising sea level, subsidence and earthquakes (which ultimately triggered tidal waves) all played a hand.