Considered as Konstantinos Theotokis’s most personal work and artistically his finest, the novel Slaves in their Chains (1922), set in Corfu, condenses more than fifty years of social change that began with the union of the Ionian Islands with Greece in 1864. "This is the last and most ambitious novel by one of modern Greece's leading and most interesting authors”, wrote in his review Professor of Modern Greek at the University of Oxford Peter Mackridge. 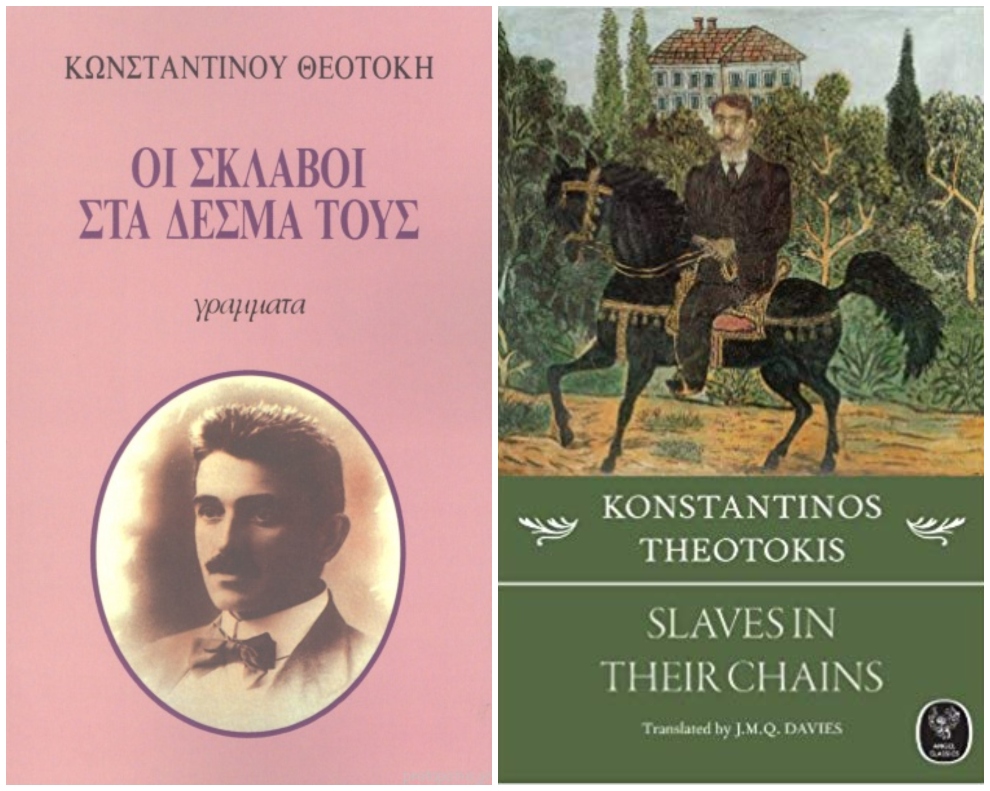 Translated by J.M.Q. Davies, Theotokis's tragicomic masterpiece is the story of a noble family's descent into poverty, dishonor, suicide, and madness - and a brilliantly entertaining portrayal of fin-de-siecle Corfu. An aging landowner in the clutches of a wily money-lender, his daughter forced to sacrifice her idealistic lover for a crude but wealthy doctor, and her idle brother in thrall to a vindictive mistress, all come dramatically to life in scenes of passionate intensity, with a deftly caricatured supporting cast of bankers, poets, impoverished aristocrats, loose wives, charitable widows, and aspiring politicians.

In the words of Roderick Beaton, “Theotokis’s masterly anatomy of the old ruling class of his native island in terminal decline is as tightly constructed and claustrophobic as a tragedy by Ibsen or Strindberg. […] […] These people are doomed, and the novel follows the intersecting paths of their doom with an anatomist’s precision”. Rich in humour and memorable characters, and savage in its indictment of snobbery, material greed and financial speculation, the novel frequently strikes an uncannily 21st-century note.

Konstantinos Theotokis (1872–1923) is a Greek novelist of the realist school, whose clear and pure Demotic Greek was flavoured by Corfiot idioms.

Theotokis came from an ancient family which fled to Corfu after the fall of Constantinople in 1453. On the dilapidated Theotokis country estate in Corfu he immersed himself for two decades in philosophy, Sanskrit and European literature, wrote powerful Naturalist short fiction about Corfiot aristocratic and peasant life, and produced a distinguished body of translations of classic European literature. In 1897 Theotokis took part in the Cretan insurrection against the Turks, after which he turned towards Marxism and helped found a socialist club. In the lead-up to the Great War he endorsed the pro-Entente policies of Greece’s liberal Prime Minister Eleftherios Venizelos.