Greece-based project EarlY WArning System for Mosquito-borne Diseases (EYWA) is the winner of the European Innovation Council- Horizon Prize for 'Early Warning for Epidemics' becoming a model of successful European partnership and excellence while demonstrating the Union’s capability of providing solutions to global challenges.

“My sincere congratulations to EYWA – the winner of the EIC Horizon Prize on Early Warning for Epidemics. The solution, based on Earth observation and other data, improves Europe’s preparedness to fight vector-borne diseases, also addressing the effects of climate change on human health, at home and abroad […]” said Mariya Gabriel, Commissioner for Innovation, Research, Culture, Education and Youth.

More specifically, fifteen European partners -six of which are Greek- collaborated under the umbrella of “EuroGEO Action Group Earth Observation for Epidemics of Vector-borne Diseases” led by the BEYOND Centre of Earth Observation Research and Satellite Remote Sensing of the National Observatory of Athens, Modern Greece’s first research center founded in 1842. The challenge was to develop a scalable, reliable, and cost-effective early warning system prototype to forecast and monitor vector-borne diseases (including malaria, Zika, dengue, or yellow fever) which - according to the World Health Organisation (WHO) - account for more than 17% of all infectious diseases in over 100 countries, causing more than 700 000 deaths annually. 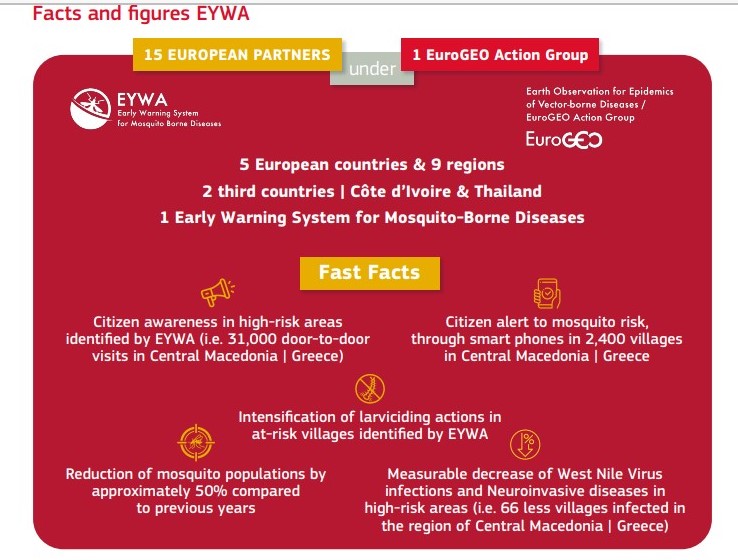 Within this context – taking into account that the 2030 Agenda for Sustainable Development aims to end the epidemics of malaria and neglected tropical diseases by 2030- the EYWA becomes a key weapon in the arsenal to fight epidemics. It transforms scientific knowledge into a decision-making tool, contributing significantly to combatting and controlling the threat of mosquito-borne diseases. In particular, the unique solution developed by EYWA:

The technological novelty of EYWA lies in the efficient handling of multiple data sources such as entomological, epidemiological, Earth Observation, crowd, and ancillary geospatial data, along with dynamic and data-driven models to generate knowledge on the mosquitoes’ abundance and pathogens’ transmission. Thanks to data provided by the satellites and Core Services of Copernicus (the EU's Earth observation program), EYWA reliably depicts the dynamics of mosquito habitats and breeding sites.

The BEYOND Centre of Excellence of the National Observatory of Athens (NOA) develops research in a number of thematic areas and provides disaster management services addressing priorities and needs in South-Eastern Europe, the Mediterranean, N. Africa, the Middle East, and the Balkans; its activity is being supported by a multidisciplinary team of experts comprising of more than 35 scientists. The NOA is one of the country’s Research Centres operating under the General Secretariat for Research and Innovation; founded in 1842, it is the first research center of Modern Greece and South-eastern Europe, thus counting more than 175 years of contribution to research and society.

More info: visit the EYWA platform and BEYOND Center website