An exhibition about the diplomatic history of Greece following the declaration of its independence, is organized by the Diplomatic and Historical Archives of the Hellenic Ministry of Foreign Affairs, as part of the celebration for the 200 years since the beginning of the Greek Revolution. The exhibition which, at the moment, goes virtual reveals important official documents concerning the recognition of the Greek State by the existing States of the time highlighting the efforts of the newly established state to gain its position in the international community. As it is described by the curator of the exhibition and director of the Diplomatic and Historical Archives Expert Counsellor Georgios Polydorakis, “military victories were not enough for independence. Recognition by the other States and establishment of diplomatic and consular relations with them, were prerequisites for Greece to become truly independent”. 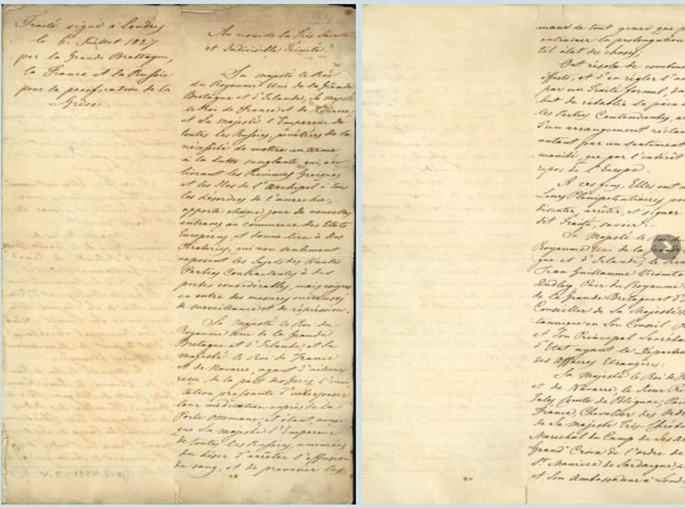 Copy of the Treaty of London (July 6, 1827) between the three Great Powers (United Kingdom, France, Russia) which provided for the autonomy of Greece with the obligation to pay a tax to the Sultan

Haiti, the first country that recognized the Greek Revolution

Although the Great powers were the first to recognize Greece’s status of autonomy by signing the Treaty of London in July 1827, the small Caribbean state of Haiti was the first independent state that recognized the Greek Revolution in 1822. President of Haiti Jean-Pierre Boyer responding to a letter dated 20 August 1821 from the directorate of the Greek Committee of Paris and signed by Korais, Polychroniades, Bogoridis and Klonaris, expressed the enthusiasm of the Haitian people for the outbreak of the Revolution. Although he declared the inability of his poor state to help the struggle financially, President Boyer wished victories similar to those in the battles of Marathon and Salamis. This letter was published in the fourth volume of Ioannis Philemon’s book “Historical Essay on the Greek Revolution” (1861). 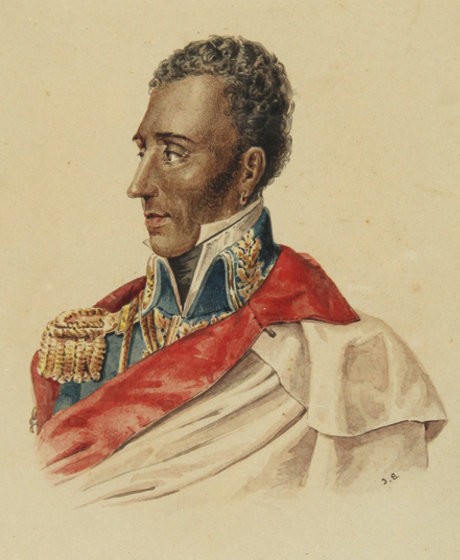 The Order of Knights of the Hospital of Saint John of Jerusalem was next in recognizing the Greek Revolution, while appointing a representative to the Provisional Administration of Greece as early as 1823.

The first official diplomatic relations with independent states begun after the establishment of the Greek independent state in 1830 and the equivalent of a Ministry of Foreign Affairs. It is worth noting though that the position of Minister of Foreign Affairs was first created by the first Greek Constitution, the Constitution of Epidaurus, and the establishment of the Provisional Administration of Greece in early 1822. Phanariot Theodoros Negris who served as the first Minister of Foreign Affairs invited consular and diplomatic representatives of foreign Governments located in the liberated Greek territories to be accredited to the Greek Government in 1822, almost a year after the beginning of the Greek War of Independence. 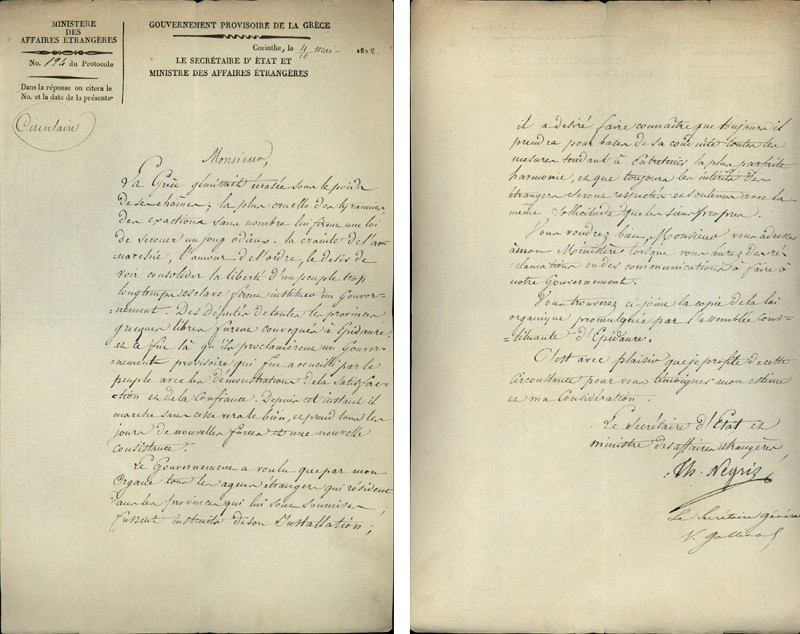 The Minister of Foreign Affairs of the Provisional Government of Greece, Theodoros Negris, invites in May 1822 consular and diplomatic representatives of foreign governments to be accredited to the Greek Government

The Great powers were the first to recognize Greece’s status of autonomy by signing the Treaty of London in July 1827. The de facto recognition of the government of Kapodistrias as the legitimate government of the autonomous Greek State takes place with the arrival to Poros of the three Ambassadors of the Great Powers in Constantinople in September 1828 and, even more so, with the accreditation of Ministers Resident immediately after that.

Concerning particularly the UK, Greek revolutionaries had begun their contacts with the United Kingdom very early during the Revolution. Many British philhellenes arrived in Greece to voluntarily help in the Struggle for Independence, some of whom had previously served as British Army officers. Furthermore, in February 1824 the Greek Provisional Administration agreed on a loan of nominal amount of £800,000 (of which 59% was disbursed) with a British bank, which could be considered as de facto recognition of the Greek Government. A more explicit recognition was, of course, the signing by the United Kingdom of the Treaty of London in July 1827. The recognition was completed with the accreditation of the first Resident in the autumn of 1828. 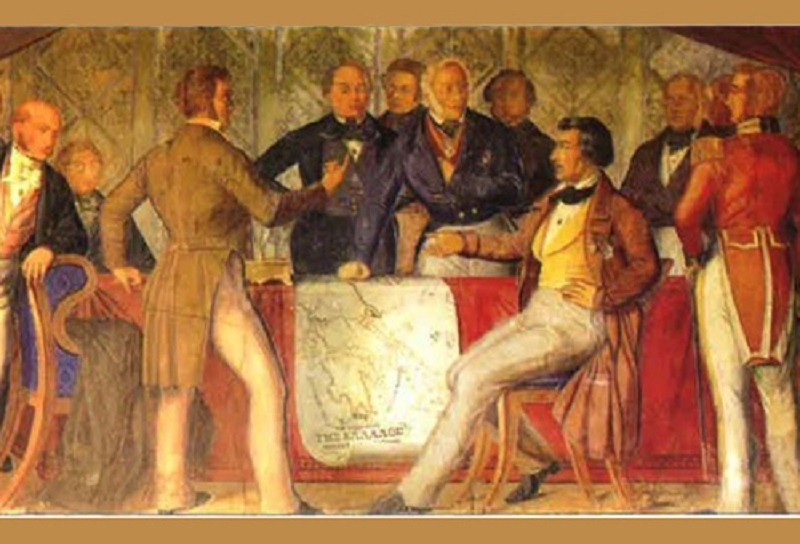 The signing of the London Protocol (February 3, 1830), the main Protocol of Independence of the Greek state – Source: Greece2021

The first formal international act recognizing Greece as an entirely independent state is the London Protocol signed on February 3, 1830 and delivered to the Sublime Porte by the Ambassadors of the Great Powers on April 8, 1830. In another Protocol of the same day, Prince Leopold of Saxe-Coburg was nominated Prince-Sovereign of Greece.

The exhibition presents documents concerning the diplomatic relations of the Greek state for a period running approximately until 1840 while the States are mentioned by the name they had at the time. Among them we distinguish the United Kingdom of Great Britain and Ireland, Russia, France, Belgium and the US but also the kingdom of the Two Sicilies, Sardinia, the Kingdom of Sweden and Norway, the States of the German Confederation, Persia et al. The exhibition presents also documents concerning relations with non-Independent States and regions of that era such as the Principalities of Moldavia and Wallachia, the Principality of Serbia, the Principality of Samos or the United States of the Ionian Islands. 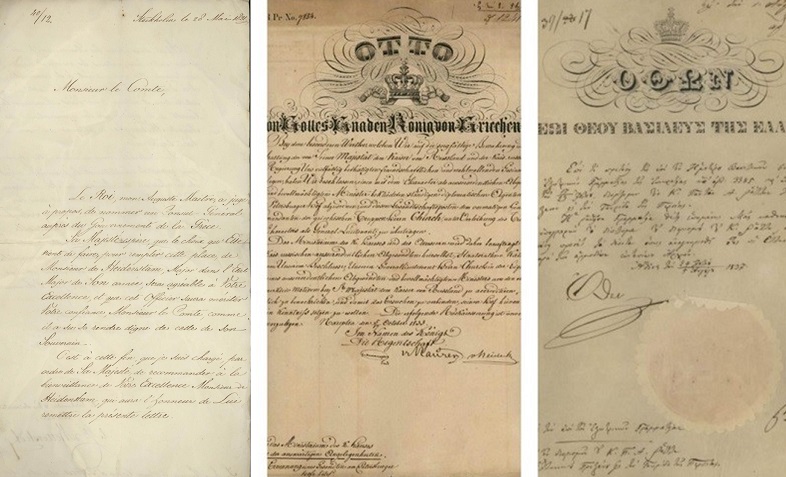 All documents originate from the Diplomatic and Historical Archives of the Ministry of Foreign Affairs, unless otherwise stated, and are digitized and posted on the digital platform of the Service of Diplomatic and Historical Archives arxeio.mfa.gr, on which the entire archival collection of the Central Service of the Ministry of Foreign Affairs until 1924 is available in a digitized format.

Visit the exhibition of the Service of Diplomatic and Historical Archives of the Hellenic Ministry of Foreign Affairs “Liberated Greece” here: https://200years.mfa.gr/en/