The 13th edition of the Los Angeles Greek Film Festival will be held June 3 - 9, 2019, at UCLA and at the Egyptian Theatre in Hollywood. The Festival features 47 new films by Greek filmmakers from around the world in its program, promotes Greek cinema and cultural exchange, while bridging the gap between the filmmakers and Hollywood with its industry section, the International Project Discovery Forum (IPDF).

The feature films in this year’s edition include “Her Job” by Nikos Labôt, “Meltem” by Basil Doganis, “Pause” by Tonia Mishiali and “The Waiter” by Steve Krikris. The documentaries section includes “Lamda Pi” about groundbreaking Greek electronica musician Lena Platonos, by Christos Petrou, “Obscuro Barroco”, adocu-fiction about the dizzying heights of gender and metamorphosis by Evagelia Kranioti, and “Olympia”, a documentary about the life and career of Academy Award-winning actress Olympia Dukakis by Harry Mavromichalis. “The Silence of the Dying Fish” by the recently awarded at the Cannes International Film Festival Vasilis Kekatos, “Patission Avenue” by Thanasis Neofotistos, and “Hector Malot: The Last Day of the Year” by Jacqueline Lentzou, are among the short films of the Festival. This year’s program also features nine family-friendly animation films to be screened on Sunday, June 9, at the Egyptian Theatre, a product of the collaboration with AnimaSyros and ASIFA Hellas. 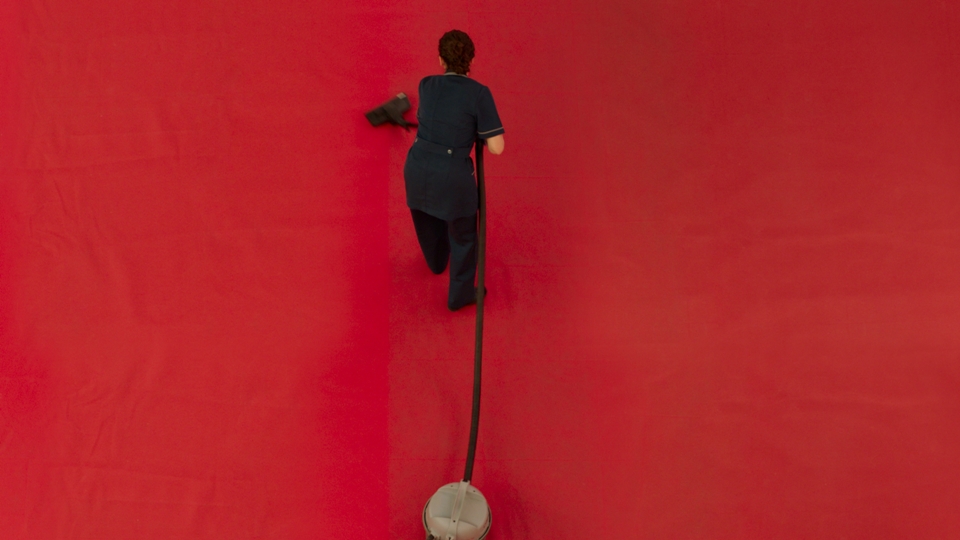 Opening and Closing Night Events at UCLA and the Egyptian theatre

As part of the collaboration between the UCLA Stavros Niarchos Foundation Center for the Study of Hellenic Culture and the Los Angeles Greek Film Festival for the second year running, the premiere screening of The Right Pocket of the Robe by first-time feature film director Yiannis Lapatas will open the Festival at the UCLA on Monday, June 3. The Opening at the Egyptian theater, on June 5, will feature first-time director Basile Doganis, in the North American premiere of MELTEM. Both events will be followed by a reception.

The Closing Night event will take place on June 9th at the Egyptian Theater, with the screening of “Her Job”, followed by the Orpheus Awards Ceremony and a reception. 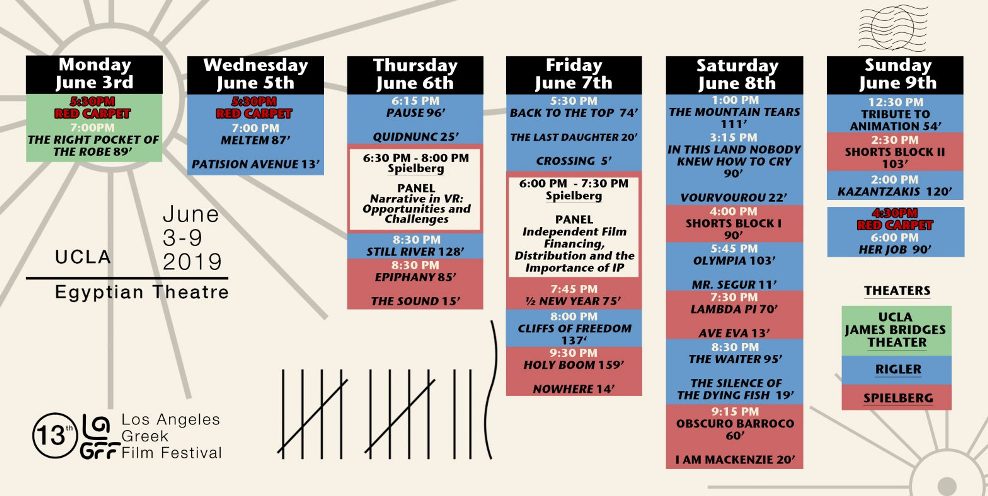 The 7th International Project Discovery Forum (IPDF) is a 4-day pitching and development workshop which takes place during the Festival in Los Angeles and features the Aegean Award ($1,000) and the MFI Scholarship Award. The chosen projects will have the chance to attend the lab that includes script feedback, pitching training, roundtables, workshops and one-on-one meetings with industry professionals such as producers, financiers and distributors.

For IPDF participants, the development lab culminates in an audiovisual presentation by each project’s representative (s) before a jury of professionals. The IPDF awards will be presented during LAGFF’s Orpheus Awards Ceremony on June 9, 2019 at The Egyptian Theater. Greek-American Casting Director and Producer Valorie Massalas will receive an Honorary Orpheus Award.

IPDF 2019 offers industry programs and panels for filmmakers and those who are interested in the inner workings and new trends in media. These programs are free, open to the public and include the following:

Independent Film Financing, Distribution and the Importance of IP (Intellectual Property): discussion on independent film financing, the secrets behind distribution in all its current platforms, focusing on the importance of Intellectual Property from copyright and trademark to privacy and publicity rights. The panel includes Christopher Kikis (CEO and Co-founder of Emerald Peak Entertainment), Chris Charalambous (Head of Acquisitions for Entertainment Studios Motion Pictures), Krysanne Katsoolis (CEO and founder of Viewpark Media), Douglas Lowell (entertainment financial consultant) and Christian Meoli (CEO of Voltaire Media).

Narrative in VR: Opportunities and Challenges: panel discussion on the new field of Virtual Reality (VR) that focuses on the narrative opportunities that VR and new technologies present to filmmakers, and the challenges of embracing the new storytelling tools. Panelists include working professionals in the field such as: Vangelis Lympouridis (Adjunct Professor VR/AR, USC), Filmmakers Stelios Aletaris (Producer of the VR documentary THE GREEN LINE), Ioannis Bekiaris (Co-director of the VR documentary THE GREEN LINE) and Alethea Avramis (creative producer, writer/director,TEDx speaker).

Read also:Greek Film Festivals of the Diaspora: The Old and the New, 12th Annual Los Angeles Greek Film Festival: Bringing Greek Cinema at the heart of Hollywood, “Her Job”: Emancipation through exploitation, “Pause”: An accurate portrayal of the acute pain of oppression, Vasilis Kekatos takes his Fish to Sundance, Thanasis Neofotistos on portraying people in their private Twilight Zone, “The Waiter”: Green and hypnotically charming, Actress Daphné Patakia: “Great things are happening in the Greek theatre and cinema”, Jacqueline Lentzou on the Utopia of Belonging